KPMG quits as Serba Dinamik auditor; it's now up to SC to uncover the truth 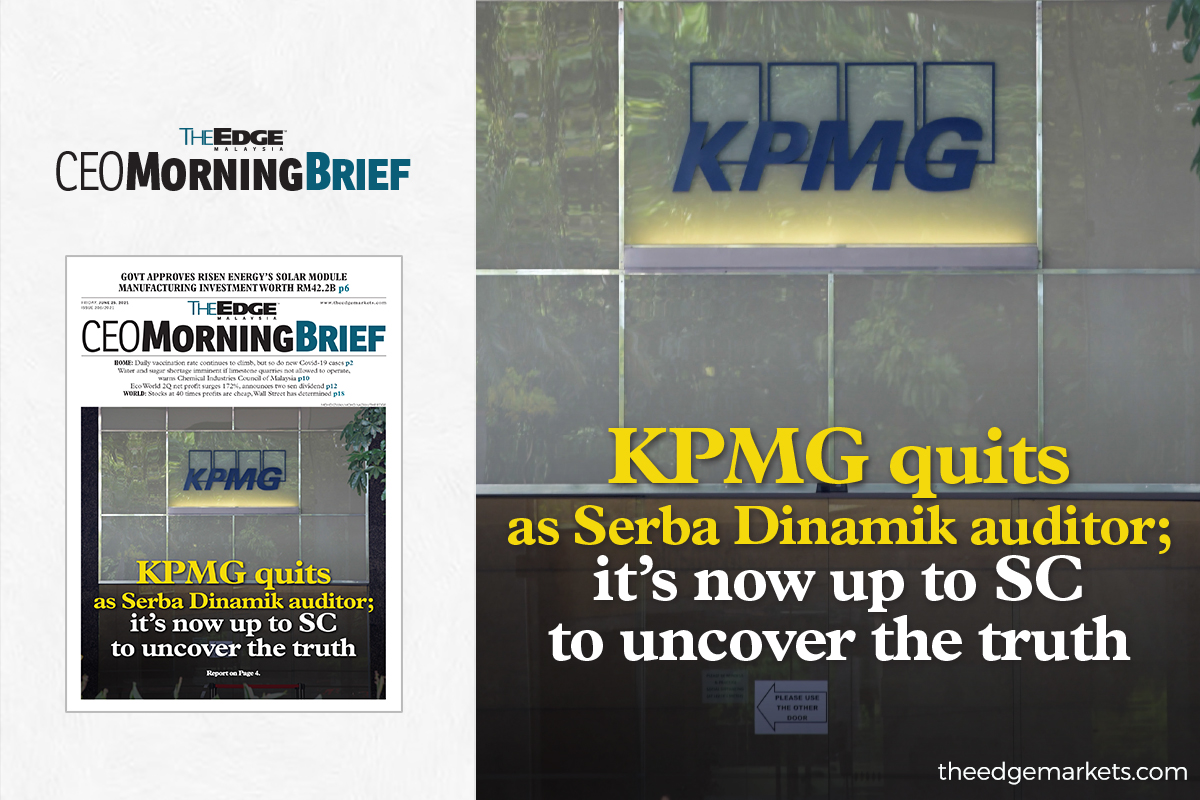 KUALA LUMPUR (June 24): KPMG PLT has resigned as Serba Dinamik Holdings Bhd’s external auditor with immediate effect, after the audit firm served the written notice to the company on Wednesday.

KPMG said Serba Dinamik’s decision to take legal action against it over the ongoing statutory audit of the company for the financial period ending June 30, 2021 had compromised the auditors’ ability to independently continue the audit engagement and discharge its professional duties, according to the filing to Bursa Malaysia.

In the same filing, Serba Dinamik said it is identifying the replacement for KPMG and that it will make an announcement upon finalising the appointment.

Serba Dinamik has been embroiled in an auditing dispute with KPMG, after the external auditor highlighted discrepancies involving transactions worth some RM4.54 billion to the company's independent directors last month. The issues raised were based on Serba Dinamik's accounts for the financial year ended Dec 31, 2020.

Serba Dinamik’s share price plummeted to record low after the audit issues were made known to the investing public. The stock, which was trading at RM1.61 prior to the news, has since sunk 68% to a new record low of 53.5 sen on Thursday. Nearly RM4 billion market capitalisation has evaporated in one month.

Among institutional investors, Employee Provident Fund and Kumpulan Wang Persaraan Diperbadankan (KWAP) have trimmed their stakes in the company.

While the investing public wait for Serba Dinamik to finalise the appointment of an independent reviewer to look at the audit issues flagged by KPMG, the company sprung a surprise on Tuesday, when it hired Tan Sri Muhammad Shafee Abdullah as its legal counsel and filed a lawsuit against KPMG.

The oil and gas services firm is suing KPMG for alleged negligence. The company’s newly-appointed chairman Datuk Mohamed Ilyas Pakeer Mohamed accused the auditor of having blown the audit issues out of proportion.

KPMG, meanwhile, told The Edge that the suit had no legal basis and that it would firmly refute the allegations, if the matter goes to court.

"We see no basis for it and will vigorously contest any court proceedings," said KPMG, one of the big four global audit firms.

In view of the lawsuit filed by Serba Dinamik, the Securities Commission Malaysia (SC) on Wednesday reiterated that auditors should be allowed to “carry out their responsibilities and render their independent opinion without fear or favour, and discharge their duties free from any retaliation”.

The regulator also stressed that auditors are required by law to report to the SC if they find any material issues, or if there are any potential breaches of securities laws and rules of the stock exchange.

“Under the Capital Markets and Services Act 2007, auditors have a statutory obligation to immediately report to the SC, if they reasonably believe that there are any matters which may constitute a breach or non-performance of any requirement of securities laws, rules of the stock exchange or any matter which may adversely affect to a material extent, the financial position of the listed company,” said the SC.

Some quarters are of the view that the ball is now in the SC’s court.

Auditors may come and go as they face hurdles in the course of doing their jobs. But being the regulator, the SC has the responsibility of upholding high levels of corporate governance in Malaysian capital market.

The investing public will now count on the SC’s investigation to uncover the truth of the audit issues raised by KPMG on Serba Dinamik’s financial accounts.

Read also:
KPMG resigns as Serba Dinamik's external auditor, says unable to independently continue to discharge its duties
Serba Dinamik plunges 10% following news of KPMG's resignation as external auditor
MICPA says auditors must be allowed to complete their task without being intimidated
SC says Serba Dinamik probe ongoing and auditors must do their work without fear or favour
Serba Dinamik’s EY appointment could be a baby step to many unforeseen discoveries
To receive CEO Morning Brief please click here.