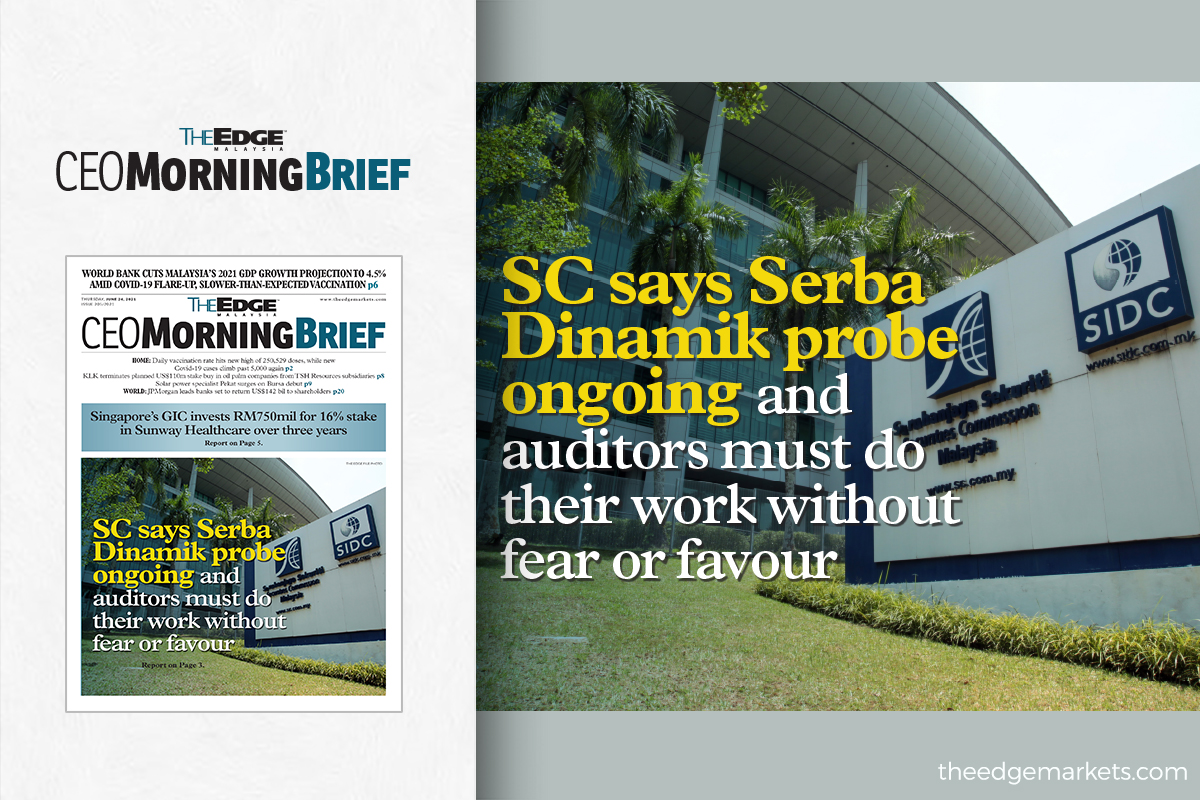 KUALA LUMPUR (June 23): The Securities Commission and Bursa Malaysia have both come out to deny that they had spoken with Serba Dinamik Holdings Bhd chairman Datuk Mohamed Ilyas Pakeer Mohamed.

In a statement today, the SC also said that auditors are required by law to report to the SC if it finds any material issues, or if there are any potential breach of securities laws and rules of the stock exchange.

The SC is likely referring to the decision by Serba Dinamik’s external auditor KPMG to go to SC with its audit red flags in the company’s books for the 12-month period ended Dec 31, 2020, which was announced in May. Following that, the SC announced in the first week of June that it had started investigations into the matter, following the dispute between the company and KPMG over the handling of the audit issues, and that it had secured documents and records from Serba Dinamik to assist its investigations.

Today, the SC updated that its investigation into Serba Dinamik is still ongoing.

“In the light of recent events, the SC wishes to reiterate that under the Capital Markets and Services Act 2007, auditors have a statutory obligation to immediately report to the SC, if they reasonably believe that there are any matters which may constitute a breach or non-performance of any requirement of securities laws, rules of the stock exchange or any matter which may adversely affect to a material extent, the financial position of the listed company,” the SC said.

“The SC’s Audit Oversight Board also stated that external auditors play an important role in promoting confidence in the quality and reliability of audited financial statements in Malaysia.

“As such, auditors should be allowed to carry out their responsibilities and render their independent opinion without fear or favour, and discharge their duties free from any retaliation,” it said.

“Auditors are also required to exercise their professional scepticism during their audit and always apply the International Standards of Auditing as adopted by the Malaysian Institute of Accountants,” it added.

In a separate statement, Bursa Malaysia, in denying any conversation ever took place between Bursa Malaysia and Mohamed Ilyas, also reiterated that it is “imperative” that Serba Dinamik appoints an independent reviewer to address the uncertainty and provide clarity to the market.

“To provide clarity to the market, it is imperative that Serba Dinamik undertake the necessary steps to appoint the independent reviewer immediately to address the uncertainty surrounding the veracity and accuracy of the matters as highlighted by its external auditors, in a timely manner.

“In this regard, Bursa Malaysia has issued a query to Serba Dinamik today to request a status update and timeframe in relation to the appointment of an independent reviewer.

“The exchange is committed to ensuring the proper dissemination of accurate and timely information to the capital market,” Bursa Malaysia said.

On Tuesday, Mohamed Ilyas, who was appointed to Serba Dinamik’s board of directors just 11 days earlier, told a virtual press conference that he found KPMG’s audit on Serba Dinamik as having been sub-par and that issues raised were trivial.

He also said he had spoken to SC and Bursa Malaysia on the matter, adding KPMG had misled the regulator, the exchange and Serba Dinamik’s board of directors.

The company also said the only reason that the SC raided Serba Dinamik’s office was because KPMG went to them, instead of deliberating the issues further with the company’s management.

During the press conference, Serba Dinamik announced it had filed a civil claim against KPMG for alleged negligence, as well as breach of contract and statutory duties.

In response to the suit, KPMG said earlier today that its audit process is sound and that it will contest any litigation.

At the heart of the matter is over RM4 billion worth of bills and transactions in Serba Dinamik’s 12-month period ended Dec 31, 2020, which KPMG had flagged due to its inability to verify the third parties.