Axiata in ‘advance discussions’ for merger of Celcom and Digi.Com 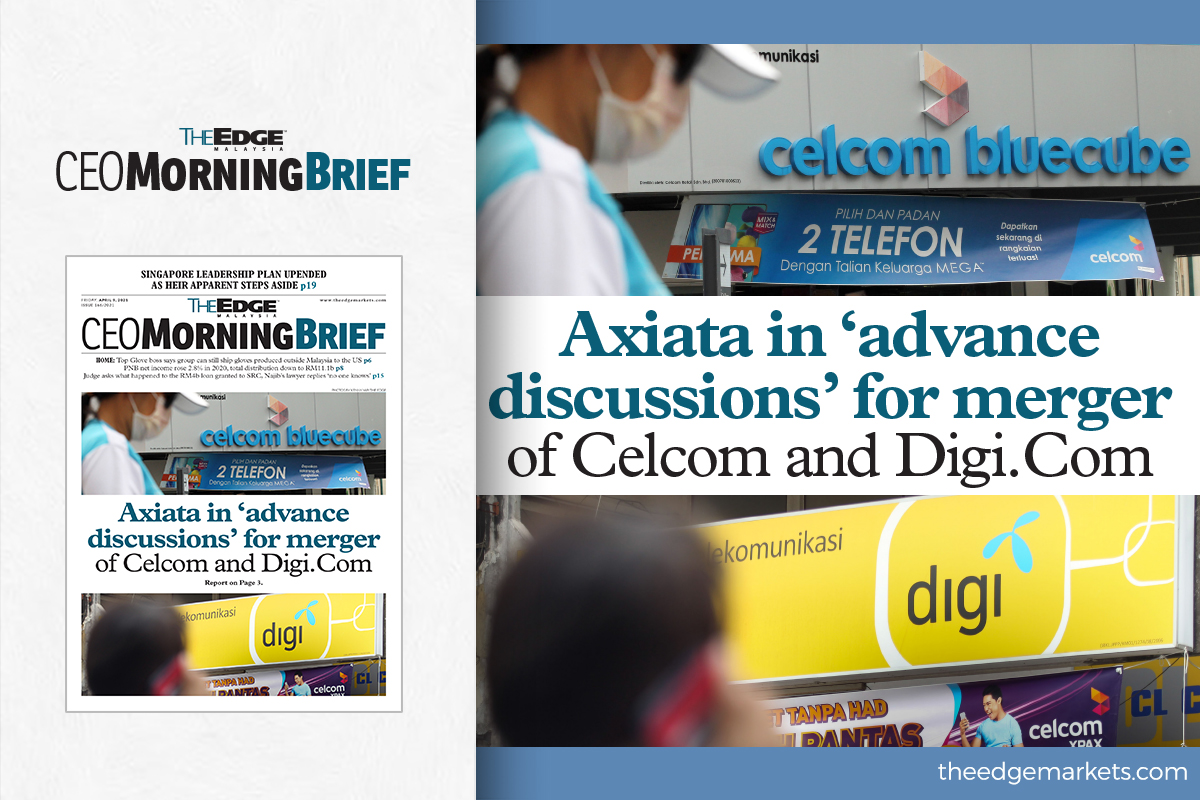 KUALA LUMPUR (April 8): Axiata Group Bhd announced that it is in “advance discussions” with Telenor Asia to merge the telco operations of Celcom Axiata Bhd and Digi.Com Bhd in which the parties will have equal ownership estimated at 33.1% each.

Axiata, together with Malaysian institutional funds, will own over 51% of the merged company to be named Celcom Digi Bhd, noted Axiata in a Bursa Malaysia announcement.

This confirms The Edge report this morning that Celcom will be merging with Digi.Com.

The Bursa announcement noted that as part of the merger transaction, Axiata will receive newly issued shares in Digi.Com representing a 33.1% post-transaction shareholding and cash equalisation amount of around RM2 billion, of which RM1.7 billion will come from Digi.Com as new debt, while the balance of RM300 million will come from Telenor.

“The merged entity will be considered a leading telecommunications service provider in Malaysia in terms of value, revenue and profit, with a pro forma revenue of about RM12.4 billion, pre-synergy EBITDA (earnings before interest, taxes, depreciation and amortisation) of the combined entity at approximately RM5.7 billion and an estimated 19 million customers,” Axiata noted.

It added that “with national interests firmly in place, Axiata and key Malaysian institutional shareholders will own more than 51% of the merged entity”.

The announcement stated that Axiata would have the right to nominate the initial chairman and chief executive officer (CEO) of the merged entity, and together with Telenor, had agreed to nominate the following individuals to the key positions: In addition, the announcement said that the merged entity will continue to be listed on Bursa.

Axiata and Telenor have also agreed to the creation of a world-class innovation centre to catalyse Fourth Industry Revolution (Industry 4.0 or IR 4.0) digital transformation, development of 5G use cases and other technological advancements.

“Employees are key assets and to address concerns over job security and employment, the parties (Axiata and Telenor) reiterate their commitment to protecting employee welfare with no forced retrenchments.

“MergeCo (the merged company) will create opportunities for staff to continue to develop across functions, build new competence and be part of future growth of the company as it explores new technologies and innovation,” said Axiata.

Both parties will work towards finalising the agreement in relation to the proposed transaction within the second quarter of 2021 (2Q21) following due diligence.

However, the parties also acknowledged that there is no certainty that these discussions will result in any agreement.

“As we face fierce competition from global Internet-based services and content providers, our stronger strategic position will allow for better negotiation levers in how we choose to compete and cooperate,” Axiata chairman Tan Sri Ghazzali Sheikh Abdul Khalid said.

Axiata president and group CEO Izzaddin also said that as a commercially stronger and more resilient entity, Celcom Digi Bhd will help restore long-term growth and capacity to the industry, especially in terms of improved profitability. In a separate statement, Digi.Com’s chair of the board of directors Haakon Bruaset Kjoel said the merger underpins a shared vision to create value through product and market innovation and high-quality data connectivity to power Malaysia’s digital ambitions in the years to come.

There was also a noticeable uptick in Digi.Com’s share price in the last 20 minutes of trading yesterday, rising 2% in that short time frame to RM3.75 from RM3.68.