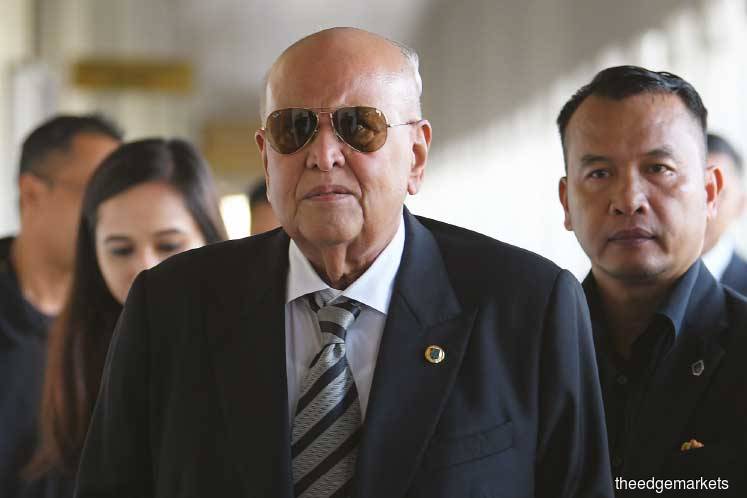 “Someone who is well versed and familiar in numerous branches of private and public law, particularly the technicalities of corporate, commercial, banking-finance, contracts, property, trusts and criminal laws," Thomas said in an affidavit opposing former premier Datuk Seri Najib Razak and his lawyer Tan Sri Muhammad Shafee Abdullah's challenge to Sri Ram's appointment to the case.

“In my mind, Sri Ram is a versatile and all round barrister who has sufficient expertise and experience to lead the prosecution team,” the A-G added in the document dated Oct 24 that was sighted by theedgemarkets.com.

Thomas added that Sri Ram's experience is unrivalled as a criminal law practitioner of the highest standards as he had appeared in the 1976 trial of PP vs (former Selangor menteri besar) Harun Idris.

“His direct appointment to the Court of Appeal in 1994 and his retirement as a Federal Court judge in 2010 and his return to active practice shows his wealth of expertise. For the past five years, he is probably the most sought after barrister in our courts in all branches of the law,” the A-G said.

“I was therefore satisfied that Sri Ram is a 'fit and proper person' within the meaning of Section 376 (3) of the Criminal Procedure Code when he was appointed as a senior DPP. I remain of that view,” he said, adding Sri Ram provided his service to the nation pro bono or at no cost to taxpayers. Section 376 (3) of the CPC grants power to the public prosecutor, i.e. the A-G, to appoint fit and proper persons to be Deputy Public Prosecutors.

Thomas went on to point out that since Pakatan Harapan came to power and his appointment as A-G in June last year, one of the new government's election promises was to resume investigations into the 1MDB scandal and the prosecution involved, in line with the investigations that have taken place worldwide since 2015, including in the United States, Singapore, and Switzerland.

Described by US A-G Jeff Sessions as "kleptocracy at its worst", the scandal has also resulted in forfeiture lawsuits in the US, Thomas said. As a result, the Malaysian Anti-Corruption Commission had resumed the 1MDB investigations it had halted previously.

“The first investigation paper (IP) was submitted to me in July 2018, resulting in the (SRC International Sdn Bhd) charges levelled against Najib. There was much delay in respect of subsequent IPs despite the occurrence of numerous fraudulent transactions related to 1MDB.

“It was clear that an experienced criminal (law) practitioner would have to work with MACC and the police to study the sufficiency of evidence collected in the IP, to monitor its direction and progress, to propose aspects that require further investigation, to review them in totality, prepare the charges and prosecute the accused in the trials,” he said, adding Sri Ram fits the bill.

1MDB the most complex case in deputy chief Azam's 34 years with the MACC
In a separate affidavit, MACC deputy chief of commissioner (operations) Datuk Seri Azam Baki said he had never come across a corruption case as "massive and complex" as 1MDB in his 34 years of service with the MACC.

“Even the investigation into 1MDB subsidiary SRC International, which was also conducted by the MACC under my purview and supervision, is not as complex as the 1MDB case.

“The 1MDB case is unprecedented. The case itself garnered wide press coverage and the Malaysian public and the world are closely monitoring the progress of the investigation. Public demand for this case, to see its resolution, is immense. Hence, investigations must be conducted expeditiously and effectively, so that no time is wasted,” he said.

The 1MDB case, he went on to say, requires inter-jurisdictional investigations and evidence gathering.

“This is to prevent delay and to ensure that the investigation work proceeded expeditiously and in the right direction. Sri Ram reviewed IPs presented to him by the MACC investigation officers as the investigation progressed, and provided his legal advice on whether the evidence gathered is sufficient to draw up a criminal charge and to prosecute the case, which are the areas that investigators could focus on and to look further to complete the investigation.

The MACC deputy chief commissioner further reiterated that he also decides what is to be shown to the former Federal Court judge and hence, there was no way that Sri Ram was involved in the investigation.

Hearing of civil challenge to Sri Ram's appointment
The affidavits were filed following Najib and Shafee's application for a judicial review over Thomas' decision to appoint Sri Ram as a senior DPP on August 31, 2018, which is up for hearing at the High Court.

While both Najib and Shafee have failed to challenge the highly experienced Sri Ram in their criminal application -- that was dismissed by trial judge Justice Collin Lawrence Sequerah all the way up to the Federal Court, which has upheld the decision -- the duo went on to raise objection via a civil application.

Although the civil challenge was initially dismissed by High Court judge Justice Datuk Azizah Nawawi (now Court of Appeal judge), a three-member Court of Appeal bench overturned his decision and granted Najib and Shafee leave to make the challenge.

The A-G, Sri Ram and the Malaysian government, who were named respondents in the suit, appealled the case at Federal Court last Oct 15, but were told by a three-member bench led by Chief Justice Tan Sri Tengku Maimun Tuan Mat that criminal and civil challenges are different.

The hearing for the merits of Najib and Shafee's application was previously scheduled for Oct 25 -- before High Court judge, Justice Datuk Mariana Yahya -- but was deferred to Nov 28 for case management following the filing of further affidavits.