Tough for Malaysia to go through another lockdown — World Bank 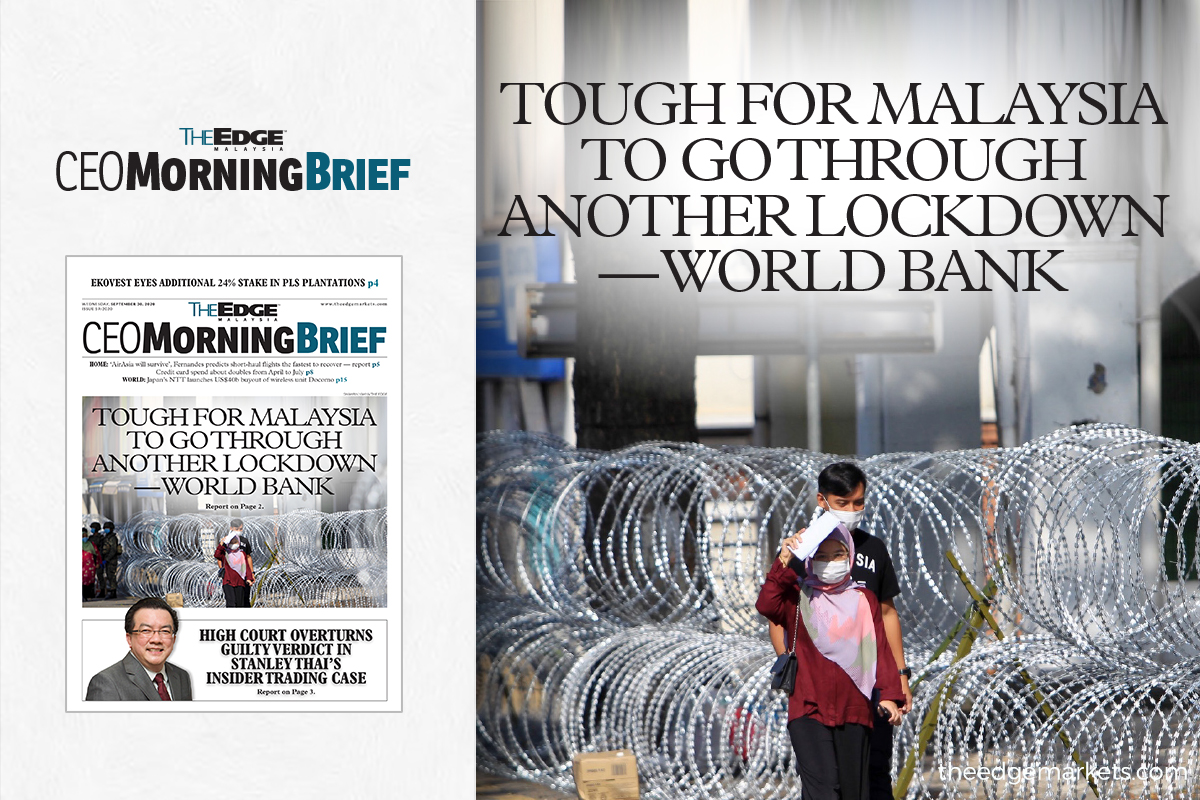 KUALA LUMPUR (Sept 29): It will be challenging for the Malaysian economy to have another lockdown to contain the spread of Covid-19, said World Bank Group lead economist Richard Record.

Record was addressing concerns about the increasing number of new Covid-19 cases in the country, the bulk of which were from Sabah.

Record, in a virtual press conference following the launch of From Containment to Recovery — the World Bank’s October 2020 Economic Update for East Asia and the Pacific — said Malaysia already had elevated debt levels, while its fiscal deficit was of a significant scale even before the pandemic outbreak.

Malaysia’s government debt is now about 60% of gross domestic product (GDP), while the country's fiscal deficit is expected to rise to 6% from 3.4% in 2019 with the implementation of the National Economic Recovery Plan (Penjana).

“While the response (the movement control order or MCO) was absolutely necessary, it will be tough for Malaysia to go through it all over again,” Record said.

He, however, said Malaysia had done well in terms of its rapid health response and rapid economic stimulus packages to support households and businesses, even though they came at a significant fiscal cost.

The challenge going forward, said Record, is to gradually wind down some of these stimulus measures and move towards a more targeted approach to help those that are particularly vulnerable, as well as look at rebuilding the country's fiscal space and balances to prepare for the next crisis.

While the World Bank’s base-case GDP forecast for Malaysia for 2020 is now at a larger contraction of 4.9% versus its earlier estimate of a 3.1% decline — following the severity of the decline in output in the second quarter and the slow global economic recovery — Record said the contraction could reach 6.1% in the worst- or low-case scenario.

“But of course, [the low-case projection is possible only] if there is a resurgence of the pandemic within Malaysia, or suppression in domestic economic activity and consumption patterns, or a sharper-than-expected or more sustained impact [from the pandemic] on Malaysia's economic outlook,” said Record.

“The health of the population and the health of the economy are two sides of the same coin, so an economic recovery is only possible if the pandemic continues to be suppressed and contained,” said Record.

At this juncture, he said the World Bank's base-case 4.9% contraction forecast for the Malaysian economy is the scenario that is more likely to play out, given the recovery of consumption patterns and recovery in export figures as well as manufacturing activity.

“Some sectors are still severely suppressed, but we are seeing movement towards a return to growth, possibly in the fourth quarter of the year, assuming continued containment efforts against the pandemic within Malaysia and a gradual recovery in global economic activity,” Record added.

Moving forward, Firas Raad, World Bank’s country manager for Malaysia, said Malaysia's economic recovery is projected to pick up in 2021 with an estimated economic growth rate of 6.3%, provided that a number of assumptions hold true regarding Covid-19 containment measures and resumption of global economic activity.

This estimate, however, has a large degree of uncertainty surrounding it, given the unpredictability of the longevity and severity of the Covid-19 pandemic, Firas said.

“It also worth noting that despite the recent increase in public-sector borrowings to fight Covid-19, government debt overall remains manageable as it is predominantly denominated in the local currency, with medium- to longer-term maturities,” said Firas.

Private debt, on the other hand — be it household or corporate — is relatively elevated and continues to pose risks to the financial system, he noted.

These risks, however, are partly mitigated by high household financial assets and banking-sector profitability that is still sound, he added.