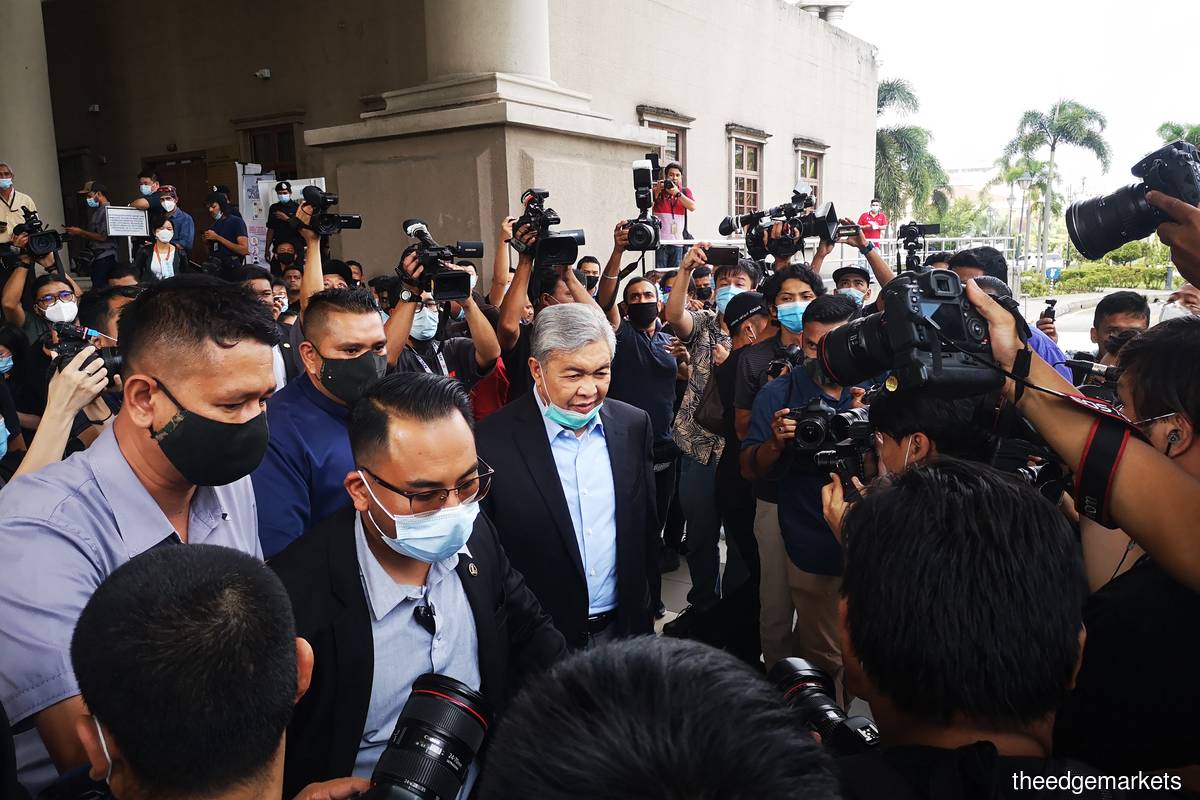 Ahmad Zahid was doorstopped by the media today as he was exiting the Kuala Lumpur Court Complex at around 4.45pm, during Najib's sentencing mitigation.

"On behalf of Umno, we accept the court's decision against Datuk Seri Najib. But as a friend, I feel sympathetic and very saddened by the decision made by the court earlier. He (Najib) told me, 'This is not the end of the world,'" he said.

"Definitely, there is something that Umno will do. Wait for the outcome of our discussions on the efforts to determine the direction of the current government," Ahmad Zahid added.

Ahmad Zahid was among Umno members who came to the court this morning to lend their support to Najib. However, the former deputy prime minister himself had to attend his own graft trial's proceedings earlier today.

This morning, Najib was found guilty by the High Court here of all seven charges of abuse of power, criminal breach of trust and money laundering in relation to RM42 million belonging to SRC International.

In delivering his verdict, High Court judge Justice Mohd Nazlan Mohd Ghazali said the case had been proven beyond reasonable doubt as the defence failed to rebut the prosecution's case.

Najib was slapped with three criminal breach of trust charges as a public servant and agent of the government, namely the prime minister, finance minister, and SRC International adviser emeritus, for misappropriating RM27 million and RM5 million in December 2014, and another RM10 million in February 2015.

Meanwhile, he was also charged with one count of abusing his power.

Najib, as prime minister and finance minister, had used his position to commit bribery involving RM42 million through his participation or involvement in the decision to provide government guarantees for the KWAP loans to SRC.

He was charged with committing the offence at the Prime Minister's Office, Precinct 1, Putrajaya, Federal Territory of Putrajaya, between Aug 17, 2011 and Feb 8, 2012, under Section 23 of the Malaysian Anti-Corruption Commission Act 2009.

Under Section 24 of the Act, he faced 20 years' imprisonment, and a fine of not less than five times the amount or value of the bribe, or RM10,000, whichever is higher.

For money laundering, Najib — who is also Pekan member of Parliament — was charged with receiving RM27 million, RM5 million and RM10 million from illegal proceeds into his two AmIslamic Bank Bhd accounts, bearing the numbers 2112022011880 and 2112022011906.

The charge, under Section 4(1)(b) of the Anti-Money Laundering, Anti-Terrorism Financing and Proceeds of Unlawful Activities Act 2001, sees the politician facing up to 15 years in jail and a fine of RM5 million, or five times the amount, whichever is higher, for each charge.