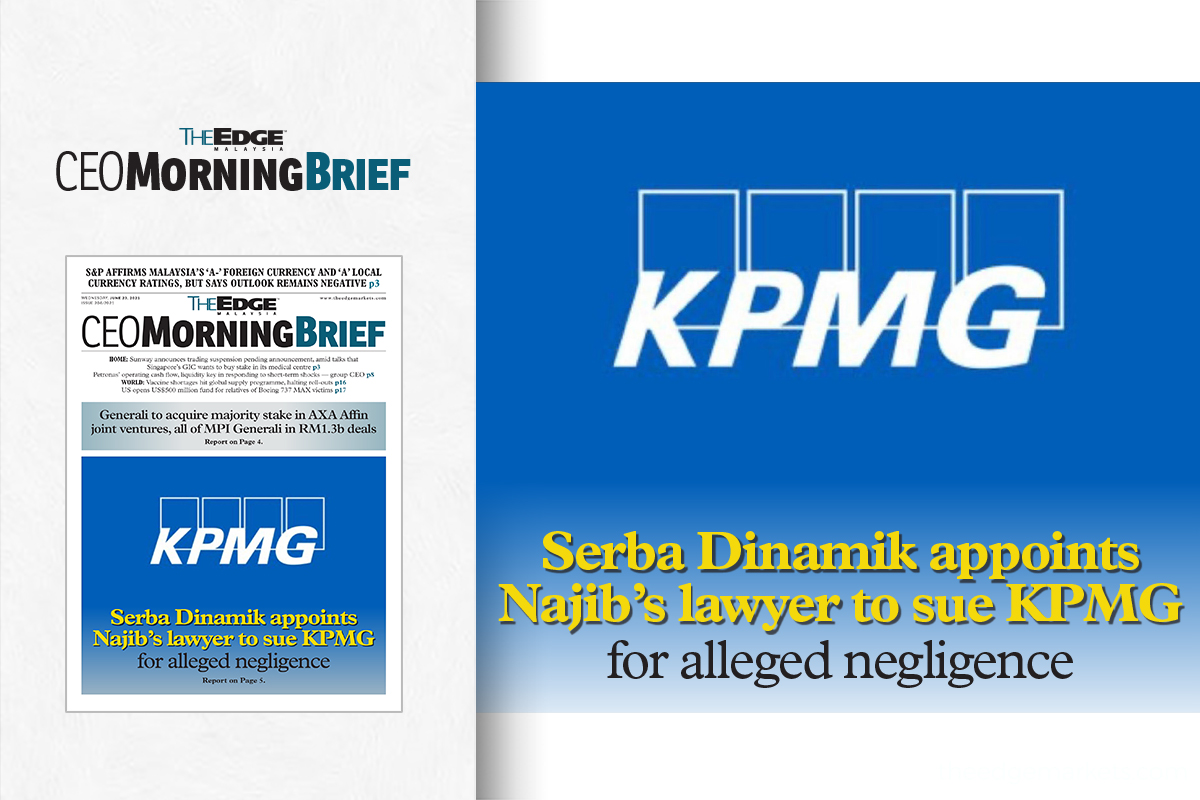 KUALA LUMPUR (June 22): After deliberation, Serba Dinamik Bhd's board has decided to take legal action against its external auditor KPMG PLT, which has shone the limelight on the oil & gas outfit for the wrong reasons, after it raised red flags on its client’s financial accounts.

It alleged that KPMG had been negligent and breached its contractual and statutory duties to the group.

"We filed the action early this morning. We wanted to do it last night. [After filing the action this morning], we served a copy of the writ on KPMG.

Shafee pointed out that KPMG had raised the red flags in an inappropriate manner. “KPMG should have resorted to meeting the client and raising the (audit) issues one by one to find out the answers,” he said.

Meanwhile, the company’s newly-appointed chairman Datuk Mohamed Ilyas Pakeer Mohamed claimed that the external auditor “has blown the audit issues out of proportion".

According to him, the issues raised by KPMG are not related to the company’s revenue nor its bottomline. “Serba Dinamik is a healthy company,” he told the media.

Serba Dinamik said KPMG’s red flagging has tarnished its corporate image. “It has portrayed that there are a lot of inappropriate things happening in Serba Dinamik."

“As a result, the company’s market capitalisation has lost over RM3 billion. This is a big sum for an oil & gas company… shareholders have suffered,” said Mohamed Ilyas, who was appointed to the board as independent director last week.

He was redesignated as the chairman of the board two days later.

The company’s former chairman Datuk Mohamed Nor Abu Bakar quit after he was made an independent director.

To recap, Serba Dinamik has been embroiled in an auditing dispute with KPMG, after its auditor highlighted discrepancies involving transactions to the tune of RM4.54 billion to the company’s independent directors last month. The issues raised were based on the financial accounts for the financial year ended Dec 31, 2020.

The company has announced that its board had agreed in principle to appoint Ernst & Young Advisory Services Sdn Bhd (EY) as its independent reviewer to "assess the veracity and accuracy" of the matters highlighted by KPMG.

It said an updated announcement will be made upon the finalisation of terms and conditions of the said appointment. Since the audit issues were made known to the investing public, the company’s institutional investors, including the Employee Provident Fund (EPF) and Permodalan Nasional Bhd, have voiced concerns over the company’s governance.

Meanwhile, institutional shareholders have cut their stake in the company.

Kumpulan Wang Persaraan Diperbadankan, which had a 5.2% stake in Serba Dinamik, ceased to be a substantial shareholder as of June 1, after disposing of 26.18 million shares or 0.7% between May 31 and June 1.

This occurred while Serba Dinamik's two largest shareholders were buying further into the company. Serba Dinamik founder and group chief executive officer Datuk Dr Mohd Abdul Karim Abdullah had since raised his stake to 27.07% as of May 31.

Karim reiterated his stance that the management “has done nothing wrong” at the media briefing today.