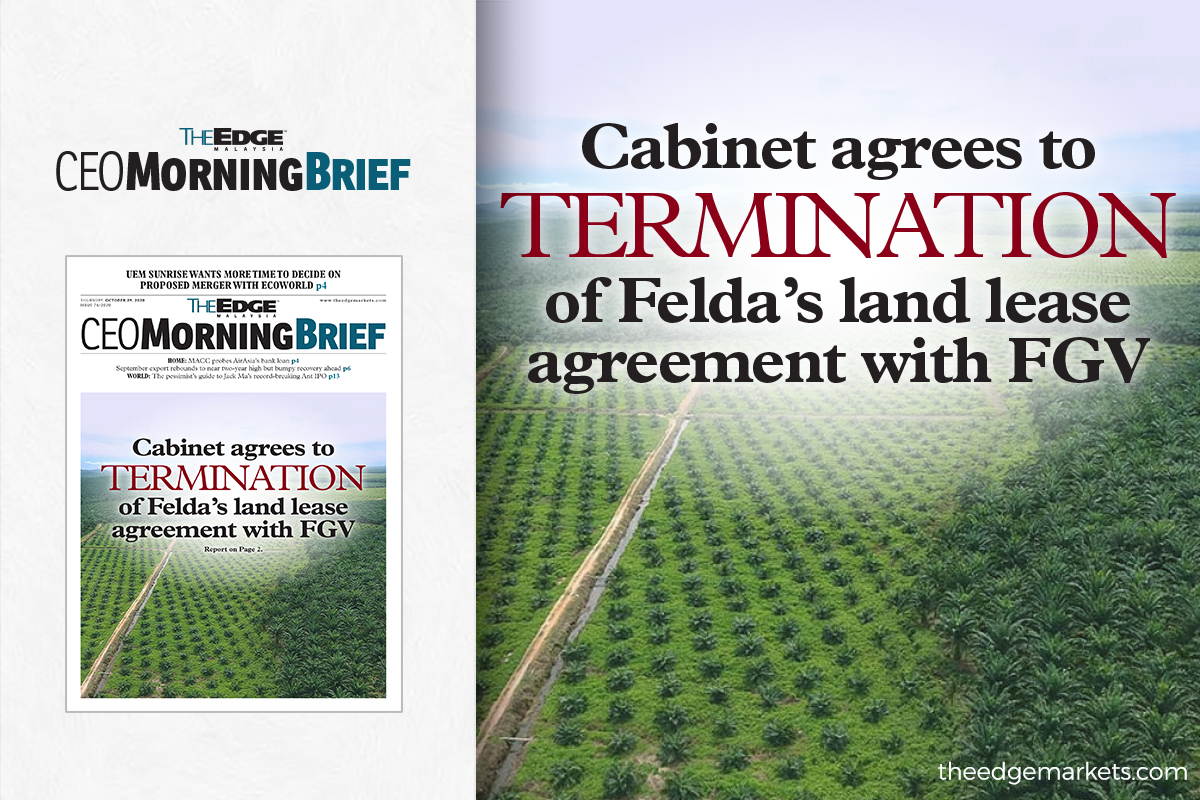 However, the statement did not mention the compensation that Felda needs to pay FGV, in which it holds a 33.66% stake, as a result of the termination of the LLA.

Felda is also facing declining sources of income, especially the receipt of lease payments for 351,000 hectares of farmland and lower profit sharing than expected under the LLA with FGV, said Mustapa, pointing out that weakness in governance and financial management also contributed to the problems at Felda.

The report prepared by the special task force was tabled at a Cabinet meeting on Oct 14. At the meeting, the Cabinet agreed to the task force's recommendations, comprising the restructuring of Felda’s debts, increasing the core income from Felda plantation lands by terminating the LLA and increasing the independence of settlers, according to the statement.

Mustapa said the Cabinet has also approved a proposed government-guaranteed sukuk issuance by Felda worth RM9.9 billion as part of the agency’s recovery plan.

With these initiatives, Felda is expected to be cash flow positive starting 2023. “Felda will return to its roots as an agency that is respected and viable,” he said.

Meanwhile, Mustapa said Felda will also see the strengthening of governance and efficiency at its plantations, adding that the board of directors and the management of Felda must be committed to the same.

The undertaking of these suggestions by Felda will be monitored closely by an oversight committee which reports directly to the Prime Minister.

The LLA was for a tenure of 99 years starting 2012, the year when FGV was listed, with the first point of negotiation on the terms of agreement to only be about 20 years into the deal, according to FGV’s listing prospectus.

In an interview with Berita Harian earlier this month, Felda chairman Datuk Seri Idris Jusoh said the agency intended to reclaim some 350,000 hectares of land from FGV and that the latter had leased the land from Felda at a rate of RM800 million per annum, although he said Felda only received RM250 million on average.

However, FGV had on Oct 20 denied Idris’ statement that the agency should receive RM800 million a year from the LLA between the two parties, pointing out that the LLA stated that the amount payable to Felda is RM248 million per year plus 15% of operating profits from the leased lands.

“To date, FGV’s responsibility towards Felda (according to the LLA) amounting to RM248 million a year has been fully met. FGV paid more than RM2.5 billion to Felda from 2012 to 2019,” said FGV.

Read also:
FGV expects compensation from LLA termination to be between RM3.5b and RM4.3b
FGV in transition after termination of land lease agreement with Felda
FGV denies Felda’s claim on amount payable of RM800m a year from LLA