Maybank, Spritzer among 210 winner of the 2016 World Branding Awards 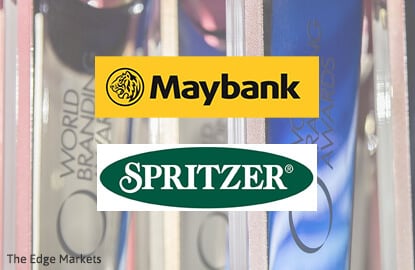 KUALA LUMPUR (Sept 21): Malayan Banking Bhd (Maybank) and Spritzer Bhd were among the 210 brands from 30 countries named “Brand of The Year” at the third edition of the World Branding Awards.

The Forum which organises the awards is a global non-profit organisation dedicated to advancing branding standards for the good of the branding community, as well as consumers.

Its chairman Richard Rowles said the awards, which was held at Kensington Palace, London, celebrates the achievements of some of the greatest brands around the globe.

“With 70% of the scoring process coming from consumer votes, winning brands have managed to build a good trust score with their consumers, “he said.

World Branding Forum chief executive Peter Pek said due to a successful campaign, this year saw a huge increase in participation of the awards.

“Winners at the awards have clearly demonstrated their ability to stand out from their competitors,” he said.

Each brand was named “Brand of the Year” in their respective categories. This year, a newly-designed 24-kt gold plated trophy was introduced for all winners.