Building on the Tenaga legacy for a brighter future 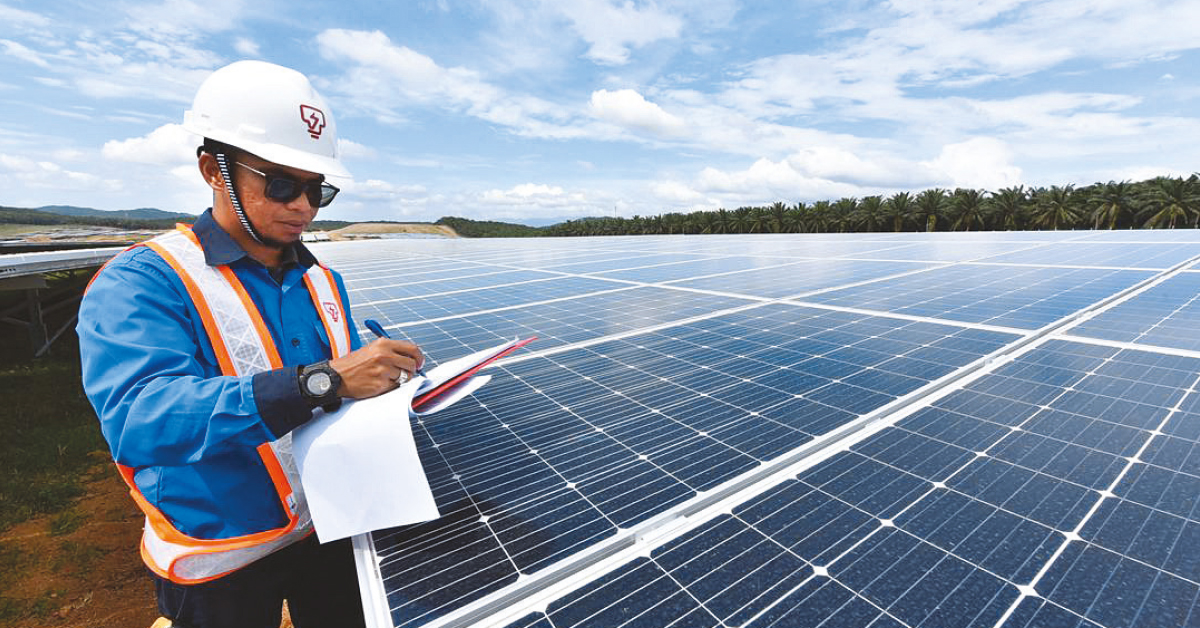 It is never easy to have a legacy that can last effectively over time. To weather the winds of changes and yet remain relevant, it is a must to maintain one’s values while modernising one’s approach.

Tenaga Nasional Bhd (TNB) is one such Malaysian legacy brand. As it celebrated its 70th anniversary this year, it also proved its ability to reinvent itself while staying true to its identity as a listed national utility company that has held its ground and strengthened.

In this context, 2019 has been a momentous year for TNB. It took clear and winning steps to transform its conventional business of keeping Malaysian homes and businesses energised and growing while venturing overseas, focusing on renewable energy.

As TNB president and group CEO Amir Hamzah Azizan said in an interview with The Edge, “These are interesting times … like the oil and gas sector, TNB [and the power sector] is also at a point of evolution for its portfolio. We are ready to address the changes.”

Indeed, as the CEO mentioned in another interview, “TNB has been through many such changes before and each time, it has adapted and emerged stronger and better.”

2019: A push into sustainability

Embracing Malaysia’s vision to have renewable energy (RE) make up 20% of the national energy mix by 2025, TNB adds to the national agenda by addressing its own generation mix while acting as an enabler to further develop the ecosystem.

This year, mechanisms were put in place to enable the “prosumer” (producer-consumer) market, namely Net-energy Metering (NEM) and the Supply Agreement with Renewable Energy (SARE) tripartite contract involving TNB as the mediator between prosumers and photovoltaic (PV) asset investors.

To cater for the increasing demand for green energy, TNB has also worked with the government to introduce mGATS — a green energy tracking platform to facilitate the myGreen+ mechanism and the Renewable Energy Certificate (REC) to allow consumers to subscribe to green energy.

Further, TNB is strengthening its foothold in the arena with collaborations with state and federal governments and corporations alike.

The group has formed various memoranda of association to explore rooftop solar power generation with property developer Sime Darby Property Bhd as well as the Public Works Department (JKR), Kuala Lumpur City Council (DBKL) and other government departments. To date, the group has secured close to 26MWp of capacity from over 100 projects consisting of commercial, industrial and residential segments.

This is over and beyond ongoing initiatives such as PV installation and maintenance by Gsparx Sdn Bhd that supports the solar ecosystem by allowing zero upfront cost for installation. TNB is also building large-scale solar (LSS) plants in Sepang, Selangor, and in Bukit Selambau, Kedah, to achieve its own 1,700MW RE supply target by 2025.

With a dedicated RE subsidiary, TNB Renewables Energy Sdn Bhd (TRe), TNB has also acknowledged a commitment to enhancing its capabilities in line with growing Malaysia’s potential in the segment.

In this day and age, the Internet, too, is fundamental to the growth of the economy.

Venturing beyond, TNB has completed a successful pilot project under the government’s National Fiberisation Connectivity Plan (NFCP), which utilised TNB’s existing infrastructure to facilitate high-speed internet for over 1,000 homes in Jasin, Melaka.

TNB’s first step towards broadband presence is being swiftly followed with a vision to utilise its 16,000km fibre network. Amir Hamzah reportedly said that TNB has identified at least 135,000 homes that are in the vicinity of its existing network with a further extension to 2.6 million homes.

The objective is simple: to bridge the digital divide between the haves and the have-nots and to create a level playing field in line with the government’s vision under NFCP.

All this was done while TNB continued to raise the bar on the stability of the foremost enabler of economic growth: a stable energy supply.

Not forgetting its end users, TNB has also introduced a myriad of services to help residents track and manage their power consumption better.

Through data analytics, initiatives like Home Energy Reports have continued to allow users to get a detailed oversight of their energy usage, compare bills between similar homes, and to learn energy-saving tips to cut electricity bills.

This can be coupled with the plug-and-play home automation system under the Maevi brand, which provides users with a great alternative to automate the entire home — and track power consumption — without having to purchase individual smart appliances that are still priced on the high side presently.

To better track power consumption, TNB has already committed RM1.2 billion for the installation of smart meters in 300,000 homes in Melaka and 1.2 million homes in the Klang Valley by 2021, endorsed by the government and the Energy Commission (ST).

The point of all these concerted efforts is that customers must be able to feel the range of the benefits of customer empowerment — the impact of knowing one’s energy consumption on a daily basis, time of use and what one can do with that information.

This is made easier for customers with the introduction and adoption of myTNBapp and the online portal that allows customers not only to make online payments but also track their daily consumption.

All this is in line with what TNB views as a shared responsibility towards improving energy literacy and energy efficiency across the population, which is a key factor to a more efficient and sustainable ecosystem in the long run.

Looking within for betterment

It is interesting to point out TNB’s awareness with the need to transform its own internal structure to maintain its world-class performance in Malaysia and beyond.

Under the Malaysia Electricity Supply Industry 2.0 (MESI 2.0), Malaysia is heading towards an increasingly liberalised power sector over the next 10 years.

In the face of the power sector reform, TNB is seeking to improve transparency and create a more efficient group overall.

For a start, the reorganisation will involve the transfer of its domestic power generation and electricity retail businesses into two new units, GenCo and RetailCo respectively.

These changes will help expand the portfolio and increase TNB’s commercial acumen while strengthening its position to reward its stakeholders and meet Malaysia’s reliability of power supply.

More importantly, the internal restructuring — part of its transformation plan, Reimagining Tenaga 2025 — will allow TNB to stand strong and compete in the local and global utility space, in spite of the regulatory and market headwinds it may encounter.

Moreover, through the world-class management of TNB’s transmission network and operational excellence, Malaysia’s power supply system is performing on par with developed nations.

In its distribution network last year, TNB’s SAIDI recorded 48.22 minutes, well below the SAIDI performance targets set by the regulators. The company expects SAIDI for this year to be at a similar level. As at

October, the SAIDI was 43.23 minutes. This achievement of maintaining an annual SAIDI figure of 50 minutes is comparable to the SAIDI performance of high-income nations such as the UK and Australia.

In support of the government’s objective to liberalise the electricity supply industry, TNB has also launched the Distribution Network Focus Area framework with the aim of modernising the distribution grid. This planned modernisation of the distribution network will allow TNB to better perform its roles as a network operator, enabler of energy integration and facilitator of open market.

All eyes are on TNB’s future growth on the global front as well, with the group eyeing a spot among the top 10 best utility companies in the world by 2025.

With all the excitement across different ventures — in RE, broadband and in exploring new ways of doing things — TNB should not lose sight of its other responsibilities: to provide sustainable returns to shareholders and to serve as a building block to the nation’s development, in alignment with the Shared Prosperity Values 2030 goals.

This has resulted in the electrification of 30 Orang Asli villages under the Rural Electrification Programme and 91,872 lights installed in rural street lighting projects.

The group is undertaking a bigger role to support the RE ecosystem by helping participants to overcome the cost barrier by tying them up with participating banks.

With the clear intent of making a significant impact on the lives of Malaysians, the utility group continues to reach out through initiatives like MyBrighterFuture — a unique education grant programme for disadvantaged Malaysians from the B40 segment who are pursuing higher education in science and technology. This year, an additional 2,708 STEM and vocational scholarships were provided to students from B40 families, bringing the total to 3,653. This initiative, which was started in 2018, builds on TNB’s existing education initiatives that range from support for PINTAR and Trust Schools to Ceria ke Sekolah.

Not forgetting its focus on sustainability, TNB is actively involved with the community through numerous positive initiatives to create more awareness and involvement in sustainability through the education of youth and communities on green energy, energy efficiency and energy conservation.

This includes engagement with enterprises and the youth community to exchange ideas and encourage green energy participation, as well as the TNB Energy Night Run 2019, TNB’s first night activity event that attracted 3,500 participants and was aimed at increasing awareness of energy conservation in commemoration with TNB’s 70th anniversary.

Leading the way for discussion among youths on sustainable energy, TNB was the green energy partner for the Putrajaya Green Energy Forum 2019, which was co-organised by University Tenaga Nasional (Uniten).

Few corporations in the world are adept at balancing the contrasting responsibilities towards different stakeholders as TNB has done over the years.

Of course, this cannot be done without the support of TNB’s experienced, dedicated team of employees — many of whom are committed to making Malaysians’ lives better and brighter.

The organisation’s transformation is an open invitation for those wearing the TNB badge to reinvent themselves together, in anticipation of more exciting, dynamic times ahead as it strives to provide a better tomorrow for all.