Zuraida: Public housing could include smart, wellness and sustainable features 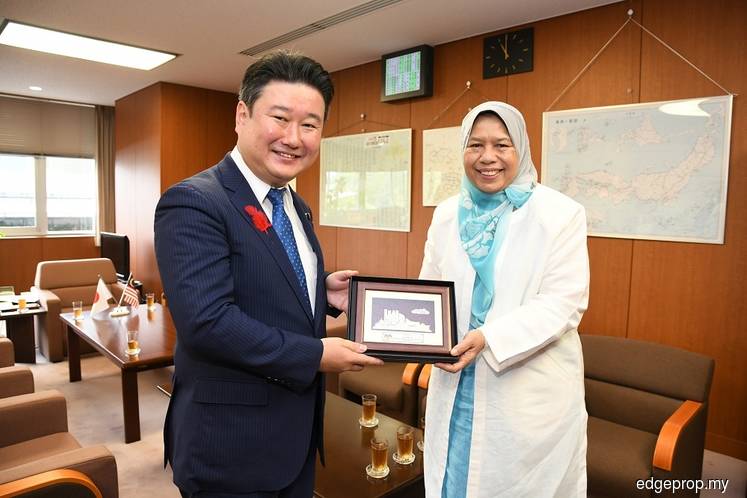 TOKYO (Oct 3): It is time to incorporate smart, sustainable and wellness technologies into public housing in Malaysia to enhance the health and quality of life of their residents, said Housing and Local Government (KPKT) Minister Zuraida Kamaruddin.

Citing indoor air quality as an example, she said Malaysia could learn from Japan, which has been regulating indoor ventilation through its Building Standard Law since July 2003.

“Maybe there will be something that we can modify to our standards in order to ensure that the B40 or the masses also enjoy the basic right to having quality air,” she told EdgeProp.my after attending a briefing in Tokyo on the Japanese housing market and building regulations by officials from the Japanese Ministry of Land, Infrastructure, Transport and Tourism this morning.

Under the Japan Building Standard Law, all habitable rooms must have windows and other openings for ventilation, otherwise, ventilation equipment must be installed.

Furthermore, buildings with ceiling cavities that contain formaldehyde must be installed with equipment designed to allow harmful chemical compounds to be removed when the emission level is too high.

These are among measures implemented by the Japanese government to tackle the Sick House Syndrome, which could cause inhabitants in newly built or renovated houses to fall ill due to volatile organic compounds emanating from building materials and furniture.

Zuraida is currently in Japan on an EdgeProp Malaysia Study Tour on Excellent Building Sustainability, Management and Wellness 2019. The study tour, which also saw the participation of heads of Malaysia's top property development firms, is supported by Panasonic.

Prior to the briefing, Zuraida had a meeting with Japan's Land, Infrastructure, Transport and Tourism Parliamentary Vice-Minister Masamune Wada. They exchanged notes on their respective countries’ public housing system.

The public housing scheme in Japan for instance, categorises low income earners who require housing assistance into two sub-categories based on income levels - the B17-to-B40 group and the below B17 group. The residents are charged a set percentage of their income as per their respective income groups, as rental of a public housing unit.

“For example, the rent-to-own schemes that we have in Malaysia are trying to serve all [income] levels of Malaysians, especially the B40 group which consists of various earners at different income levels.

“This gives me an idea to break the B40 grouping down to the B20 or B10 so that it would be more effective and targeted in solving the homeownership difficulties faced by the lower income group,” she said.

She added that it is still not too late for Malaysia to adopt some of the measures that other countries have been implementing for a long time.

"With some improvising and fine tuning, we will be able to solve the issues plaguing the local housing market," she said. — EdgeProp.my