Zeti: UNDP report is misleading as 90% of Malaysians have some form of savings 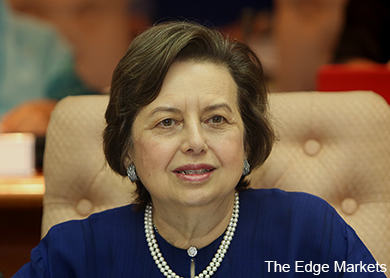 "The report published by UNDP (United Nations Development Programme) is partial and misleading, as it relies heavily on data by the World Bank, which track household savings via banking accounts. It does not truly reflect the real situation.

"You have to remember that in Malaysia, savings are not necessarily measured by commercial banks. We also have non-bank financial institutions or 'shadow banks', cooperatives, BSN [Bank Simpanan Nasional] and [Lembaga] Tabung Haji," Zeti told reporters during a media workshop session held by the bank here today.

UNDP launched the inaugural Malaysia Human Development Report titled 'Redesigning an Inclusive Future' on Nov 25. Citing figures from the Household Income Survey (HIS), the report also noted that nearly 90% and 86% of the rural and urban households, respectively, had no savings, while the majority of households, at 88%, had zero earnings from their savings.

It said that while Malaysia recorded a relatively high gross national savings rate, the bulk of the savings came from the corporate sector.

The report provides a comprehensive and robust look into the challenges facing Malaysia and gives recommendations to steer the nation towards vision 2020 and beyond, said UNDP in its website.

The report was published for the UNDP and was sponsored by both the UNDP and the Economic Planning Unit, which is under the Prime Minister's Department.