Zeti: Bank Negara has identified a few candidates for the governor's post 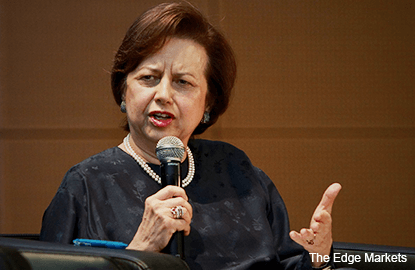 "I do believe there are a few candidates and would encourage the governance committee to convene and conclude on this issue at least three months before the appointment [of the next governor]," said Zeti in a press conference after announcing Malaysia's third quarter gross domestic product (GDP) growth today.

Zeti said Bank Negara has a succession plan in place and that it is to reflect the solidity of the central bank.

According to her, a few individuals were nominated to succeed her previously but none of them was approved by the bank's governance committee as they were linked to other companies that have conflict of interest.

In order for the candidate to be appointed the governor, Zeti said he or she must fulfil all criteria stated in the Central Bank of Malaysia Act 2009, which specified that the governor must have certain background and possess certain credentials; for example, he or she cannot be a senator, assemblyman or member of parliament, and cannot be an officer or director of any entity under the central bank's supervision.

"The committee will make an assessment of all [the] potential candidates before making the appointment," she added.

Zeti said once a governor is appointed, whether his or her term would be extended would depend on the assessment of the committee — based on his or her performance in the previous five years.

Zeti has been the central bank governor since May 2000 and was the first woman in the position. She succeeded Tan Sri Ali Abul Hassan Sulaiman, who stepped down in April 2000.

On the economy's outlook, Zeti said the nation is still on track to achieving a GDP growth of between 4% and 5% this year.

While external trade performance was expected to be modest, Zeti said domestic demand would continue to be the main growth driver.

"As a result of structural adjustments that have been steadily undertaken over the years, the economy is now supported by diversified sources of growth," she said.

Bank Negara said the country's GDP expanded 4.7% in the 3Q from a year earlier, helped by export and domestic private sector demand growth.

In quarterly terms, 3Q GDP rose 0.7% from the preceding second quarter. The Statistics Department said in a separate statement that cumulative nine months' GDP grew 5.1% from a year earlier.

Looking at 2016, Zeti said while downside risks to growth remained, Bank Negara expects the economy to expand within 4.5% to 5.5%.

Zeti also projected that the inflation will continue to rise until the first quarter of 2016 (1Q16), due to falling oil and commodity prices, coupled with the weakening ringgit.

She said the implementation of the goods and services tax (GST) also partially contributes to the rise in inflation.

"According to other countries that implemented the GST, there would be a rise in prices. We expect the inflation rate to normalise back to 3% after the 1Q16," she added.