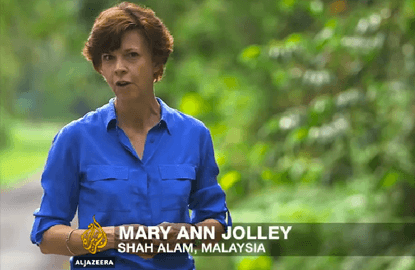 (Dec 1): The Al Jazeera journalist who produced a half-hour investigative piece on the murder of Altantuya Shaariibuu has been barred from entering Malaysia as her actions were deemed “detrimental to the country's safety and security”.

Home Minister Datuk Seri Ahmad Zahid Hamidi said the Immigration Act 1959/63 gave power to the immigration director-general to stop any foreigner from entering Malaysia if the individual posed a risk.

“Al Jazeera journalist Mary Ann Jolley is not allowed into the country as her actions can be detrimental to the security of the country and public order,” Zahid said in a parliamentary written reply to Hee Loy Sian (PKR-Petaling Jaya Selatan).

In the programme, Jolley led viewers through the Altantuya saga which was rife with sex, financial scandals, violence and conspiracy.

The Al Jazeera documentary questioned whether the two men eventually convicted of Altantuya’s murder – Sirul Azhar Umar and Azilah Hadri – were the “fall guys” for others, citing alleged text messages sent by Sirul suggesting a cover-up.

Jolley, an Australian, said her team took several months of investigations and background work to produce the video which aired in September.

Jolley was deported by Malaysian authorities on June 14 even though she had not been charged with any crime and was not given any reasons for her deportation.

Altantuya, a Mongolian national, was murdered in October 2006 with her remains destroyed by military-grade explosives.

Razak Baginda was charged with abetting her murder, but was later acquitted.

Najib said the documentary and the resurfacing of the Altantuya case was a “conspiracy” against him, highlighting the timing of its release, even as he faces calls for his resignation.

A statement by Al Jazeera said the Home Ministry deported Jolley as her activity had a “potential negative effect on the image of Malaysia”. – The Malaysian Insider