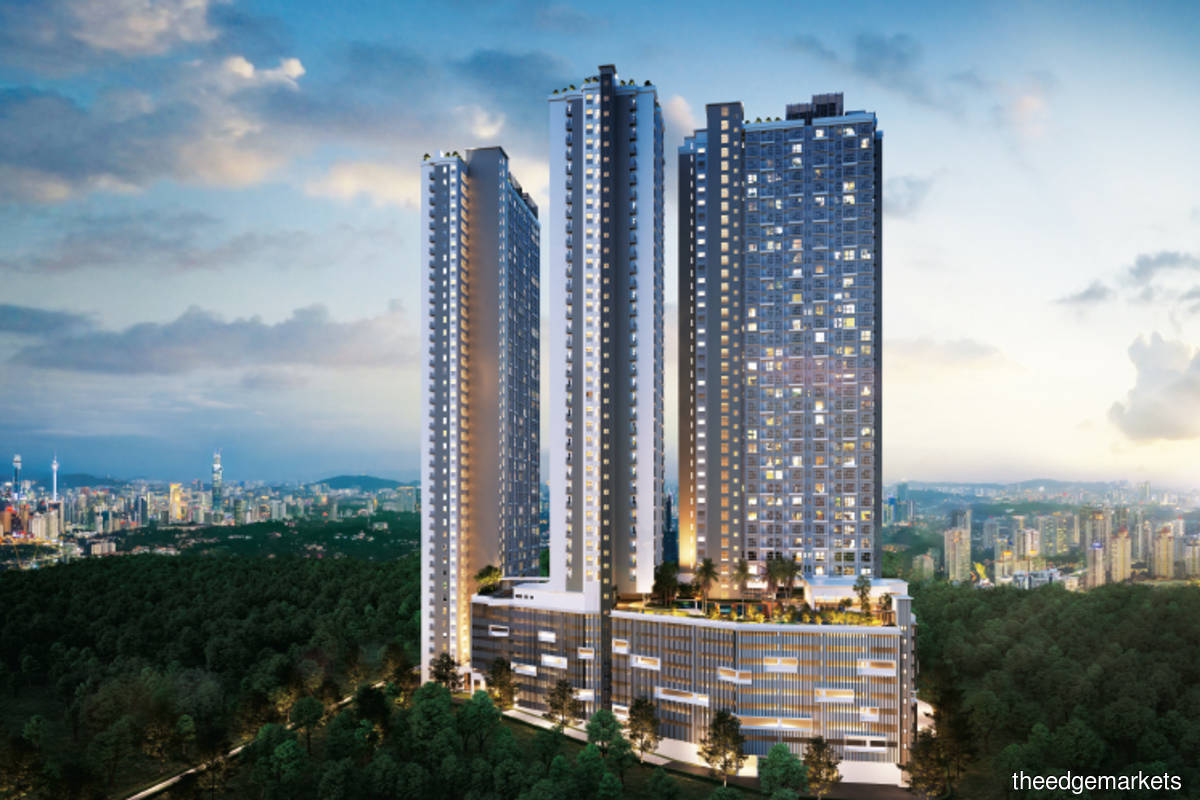 An artist’s impression of Solasta Dutamas (Pictures by YNH Property)

Perak-based YNH Property Bhd will be launching high-rise development Solasta Dutamas in the fourth quarter of this year.

The units will have built-ups of between 720 and 900 sq ft and layouts with one to three bedrooms. The selling price starts from RM493,800.

In the third quarter of last year, YNH Property soft-launched two towers and has received bookings of close to 60%.

“The reason for this good response from prospective purchasers is due to its location, which is in a mature neighbourhood surrounded by amenities such as education, healthcare, lifestyle and everyday needs,” general manager James Ngio tells City & Country via an email interview.

Popular lifestyle spots such as Publika Shopping Gallery and Solaris Mont’Kiara are located within a 2km radius of Solasta Dutamas while the city centre is 8.6km away.

“With its strategic location near the city centre and competitive pricing, we are targeting young working executives who are buying their first home and those who prefer to stay near their workplace for convenience,” says Ngio. “We know what the young urbanites want in setting up their first homes. So, we are tailoring the product to suit their demand for a classy abode in the city for convenience and excitement and yet still embraces nature,” Ngio comments.

He says Solasta Dutamas is designed for residents to be close to nature. They will be able to have an early morning walk or jog around the development before going to work.

The landscape and the pool area are created for water enthusiasts. Hence the inclusion of the various types of pools.

Highways such as the Duta-Ulu Kelang Expressway, Penchala Link and Jalan Kuching will be connected to the development, making it easy for residents to get around and travel to areas such as Kuala Lumpur, Kepong, Petaling Jaya, Damansara and Taman Tun Dr Ismail, says Ngio.

For the next two years, YNH Property will be busy with the second phase of Kiara 163, which consists of The Ooak serviced apartment and Ooak suites, Ngio reveals. The RM1.3 billion project is located at the entrance of the Mont’Kiara neighbourhood.

Launched in 2018, The Ooak serviced apartment and Ooak suites have achieved more than 80% sales to date. The serviced apartment development, which is the second phase of Kiara 163, comprises two 40-storey towers with a total of 718 units.

Kiara 163 is a mixed development that consists of two towers of serviced apartments, one tower of small offices/versatile offices and a 5-storey retail podium. It was launched in 2016. Meanwhile, one of the developer’s upcoming projects is a serviced apartment development called Celestia Genting Highlands. The RM700 million project will feature three towers of serviced apartments and will be launched next year.

“We will assess the market conditions before making any decision to launch,” says Ngio.

The developer also owns a prime plot along Jalan Sultan Ismail, Kuala Lumpur, which has been in its possession since the Asian financial crisis.

“The current plan is for a mixed development with an estimated gross development value of RM4 billion. We are in no hurry to launch this project until the time is right. Land in the city centre is scarce and this is one of the last plots of prime land. So, we will only develop it at the right time to maximise its value and potential,” says Ngio.

The components of the development will be serviced apartments, hotels and retail offerings that include mainly F&B operators, he adds.

While the Covid-19 pandemic has greatly affected the economy and property market, YNH Property has an optimistic view of the future.

“We believe the overall economy will improve in the longer term. The economic stimulus packages announced by the government for the property sector will also boost the property industry,” says Ngio.

Demand for well-designed properties in good locations is still strong, he notes, and YNH Property has a land bank in prime locations.

Moving forward, the developer will continue to do what it has done right all these years and aims to remain prudent and resilient in its approach to grow the business.

“We have a sizeable land bank in strategic locations, whose value we are committed to unlocking. We are working closely with the authorities to obtain the approvals so that we are well-positioned to launch projects when the time is right,” says Ngio.