We deem the results within our expectations as we believe 4QFY15 results might be lower on the back of no Petroleo Nautipa earnings post-disposal in Oct 2014. Our 3QFY15 core net profit forecast is adjusted for the exclusion of forex gain of RM24.8 million and gain on disposal of subsidiary and joint venture of RM20.9 million.

Market talk has it that Yinson is close to winning a large FPSO contract soon. This is within the previous guidance that it is bidding for at least 3 projects that could see some results in the second half of 2015.

We believe the market has factored this potential win, judging from the premium valuations of less than 20 times FY16 price-to-earnings ratio (PER) that the stock is trading at. While we are positive on this, we highlight that any new project would only yield earnings by end FY16 to FY17 (due to construction period of 18-24 months). Also, we do not rule out cash calls should the new project be a huge one.

There are plans to divest the non-oil and gas (O&G) division, but this might only occur from next year.

While we like Yinson for its long-term contracts and ambitious management, we believe that the market has priced in at least one to two contract wins, which would contribute only from CY16.

Moreover, the stock is now trading at a steep premium to its larger peer Bumi Armada, which trades at CY14 to CY15 PER of 17.4 to 13.7 times tipping the risk-to-rewards balance towards more risks as Yinson embarks on more global contracts.

Our TP remains unchanged at RM2.31, based on CY15 earnings per share of 13.6 sen, and unchanged PER of 17 times.  We  maintained our PER for Yinson for its ability to win contracts. — Kenanga Research, Dec 23 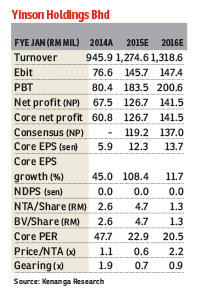