STEEL counters, which had been stuck in the doldrums in 2015, made a comeback, topping the tables this year on the back of a recovery in steel prices. Many steel companies saw their share prices doubling and even tripling over the course of 2016.

The recovery in steel prices was due to several factors, including the scarce supply of coking coal — a key component in steel production — in the second half. Industry sources say the price of coking coal has jumped from US$90 per tonne to about US$300 of late.

Apart from that, China, in a bid to reduce the smog smothering the country, has forced steel manufacturers to reduce their output and shut down inefficient mills.

On Bursa Malaysia, small cap Mycron Steel Bhd chalked up more than a 200% gain in its share price to 83 sen, from 28 sen at the beginning of the year, putting it at the top of the league. Ann Joo Resources Bhd and Press Metal Bhd, both of which have a market capitalisation of more than RM1 billion, were among the counters that shone as their share prices surged 200% and 100% respectively during the year.

Meanwhile, AirAsia Bhd and AirAsia X Bhd — among the worst performing stocks in 2015 — saw a drastic change in fortunes to place among the top performers on Bursa. The turnaround in their financial performance spurred share price rallies earlier in the year.

Over on the ACE Market, most of the top gainers were information technology stocks, except for Kanger International Bhd, an integrated bamboo product manufacturer and supplier, whose impressive gains can be attributed to its improving revenue and net profit throughout the year.

The biggest losers on the Main Market were mainly China-based companies as well as those from the oil and gas sector. The bottom spot was, however, taken by APFT Bhd, a flight education and training service provider, whose share price plunged 87.76% over the year.

Xingquan and Maxwell have seen net losses balloon this year. Xingquan’s net loss surged to RMB605.9 million in the fourth quarter of FY2016, compared with RMB18 million a year earlier. A large portion of the loss was attributed to a bad batch of 3.6 million pairs of custom-made shoes that failed to meet customers’ specifications.

Maxwell, on the other hand, raised eyebrows when it registered zero revenue and a net loss of RM31.7 million during the second quarter ended June 30, 2016, due to a surge in “other losses and expenses”.

Joining them on the list of the top 20 worst performing stocks are Sino Hua An International Bhd and China Automobile Parts Holdings Ltd, which incurred net losses for the year as well.

A notable loser is furniture maker Signature International Bhd. Its share price slumped 50% during the year as it was hit by a slowdown in the local property sector. Its project division relies heavily on jobs from property developers to fit kitchen cabinets for units that are being rolled out.

The top laggard is UMW Holdings Bhd, which saw its revenue shrink and net losses for the cumulative nine months ended Sept 30, 2016. All its divisions — automobile, equipment, manufacturing and engineering and oil and gas (O&G) — recorded lower revenue during the year.

The conglomerate’s performance was adversely affected by the weakening ringgit and low oil prices. Notably, the O&G division recorded losses this year while subdued logging and mining activities dampened equipment sales. It didn’t help that automotive sales are expected to contract on the back of poor consumer sentiment.

Crude oil prices, despite a slight rebound to about US$50 per barrel, have yet to lift sentiment or the share prices of O&G stocks.

Nevertheless, the unprecedented agreement by oil-producing nations and the Organization of the Petroleum Exporting Countries (Opec) to cut output in 2017 could lift prices going forward. The deal would remove 558,000 barrels of crude oil from the market, in addition to the 1.2 million barrels a day agreed to by Opec.

However, it remains to be seen if member countries will comply, given that there is no legally binding way to ensure it takes place. 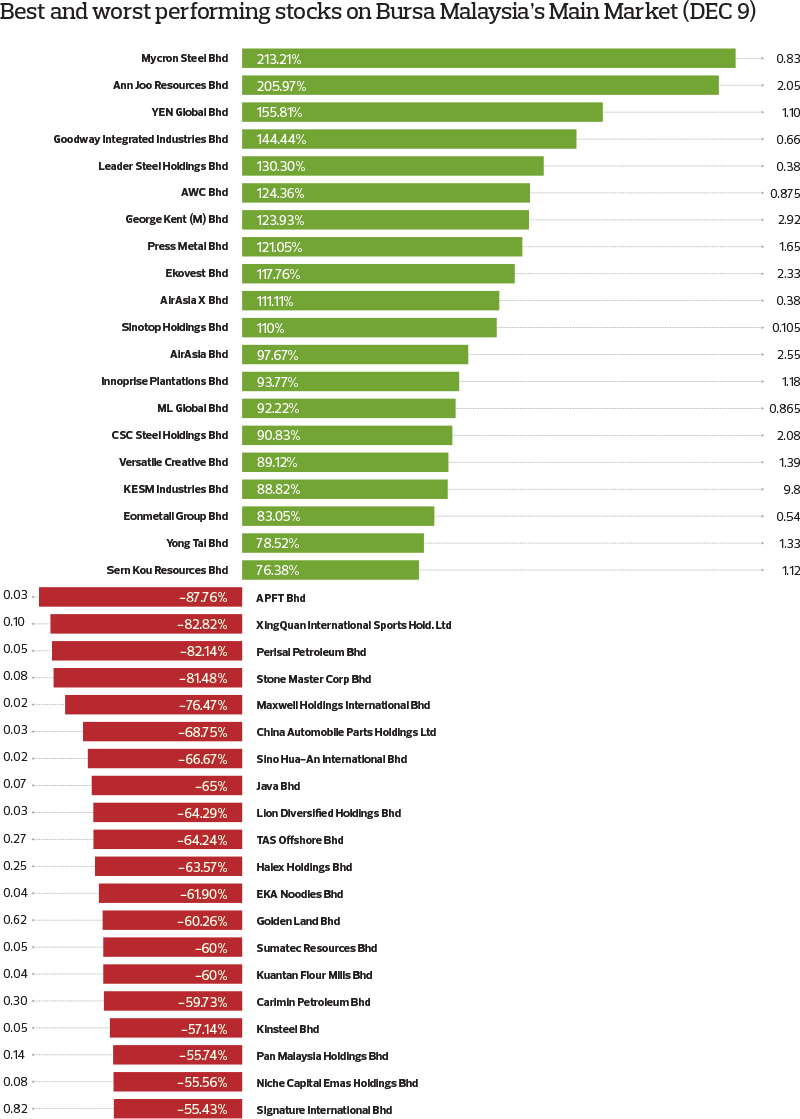