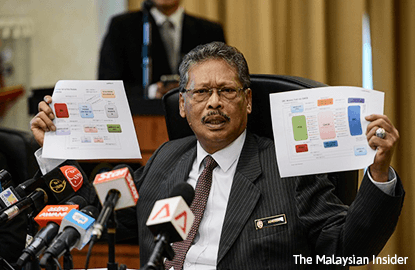 KUALA LUMPUR (Jan 27): Prominent foreign news organisations have been reporting on the decision by Attorney-General Tan Sri Mohamed Apandi Ali not to  take further action over US$681 million deposited into Datuk Seri Najib's personal accounts in 2013.

Here are excerpts and summaries on the reporting by The Wall Street Journal, The New York Times, BBC and The Independent, among others.

The Wall Street Journal (WSJ) reported a spokesman for the Saudi foreign ministry saying that officials were looking into the statement and couldn’t now comment further. The alleged donation was made under the kingdom’s previous monarch, King Abdullah, who died a year ago.

The WSJ said critics of Najib weren’t satisfied by the A-G’s conclusions, claiming that the prime minister had interfered with the official probes into the RM2.6 billion donation as wella as the controversial 1Malaysia Development Berhad (1MDB).

Tony Pua was quoted by the WSJ as saying that the A-G “has provided no new or convincing information or arguments” to show the fund transfers were bona fide and not used for corruption.

The Wall Street Journal first reported on July 2 last year about the flow of funds into Najib's personal accounts.

WSJ added that overseas probes into 1MDB’s activities are continuing in at least five countries, including a US Federal Bureau of Investigation investigation into assets owned by Najib and his family, such as luxury real estate in New York and Los Angeles.

Reporting on Najib's exoneration, The Independent highlighted that it was by an attorney-general he had appointed.

The esteemed UK broadsheet also quoted opposition spokesman Kim Quek as saying: “If the top public servant of the country can openly amass billions with impunity, why can’t lesser officials similarly enrich themselves in lesser amounts? Wouldn’t that open a floodgate of runaway corruption in the country?

“A country led by such a morally bankrupt leader would jeopardise the investment climate and cause a serious dent to the economy, which is already caught in a tailspin. There has been so much evidence made public implicating Najib, there are huge holes in the attorney general’s statements. He  has answered none of the questions that have been raised. No one is going to believe this.”

According to The Independent, loyalists in Umno and Barisan Nasional may be unconcerned over the huge donation from persons unknown within the “Saudi royal family” but internationally, the economic fall-out could be substantial.

The report quoted former prime minister Tun Dr Mahathir Mohamad as saying: “The only thing we can do is to have the prime minister resign... or be removed. Because he is the principal person who has brought about this bad image for the country.”

The New York Times reported on the outrage and cynicism by the opposition and ordinary Malaysians after the A-G had closed the investigation because "no laws had been broken".

PKR secretary-general Rafizi Ramli was reported to have called Najib “the luckiest person”, having received so much money and “most generous” for having returned so much of it.

The US paper said the Putrajaya had moved aggressively to shut down leaks that led to the investigation, with the police raiding the MACC headquarters while suspending the publishing license of The Edge, and also removing deputy prime minister Tan Sri Muhyiddin Yassin, who had been pressing for further investigations.

On the SRC International probe, NYT reported Najib saying in a statement that he “was of the belief” that money he had spent from his account was all part of what had come from the Saudi royal family.

Calling the case of SRC "potentially explosive", NYT said it involves the retirement savings of civil servants, from which SRC had received a loan of more than US$930 million following Cabinet approval.

NYT continued with the reported lavish spending of Najib's wife, Datin Seri Rosmah Mansor, and his stepson in real estate in the United States coming under scrutiny.

According to the NYT, last September, people with knowledge of the investigation said that a US federal grand jury was examining allegations of corruption involving Najib and "people close to him".

The Guardian reported Najib's reply to the attorney-general's comments, that it had “confirmed what I have maintained all along: that no crime was committed”.

The UK daily quoted DAP's Tony Pua saying that the “basis to absolve the prime minister of any wrongdoing is utterly without merit because the ‘personal affair’ does not preclude corrupt motives or transactions”.

“The attorney-general has provided no new or convincing information or arguments on whether the massive funds were bona fide, which leads to the question whether the newly appointed attorney general is merely covering up for the prime minister.