Will the dose of optimism from the US calm the bear? 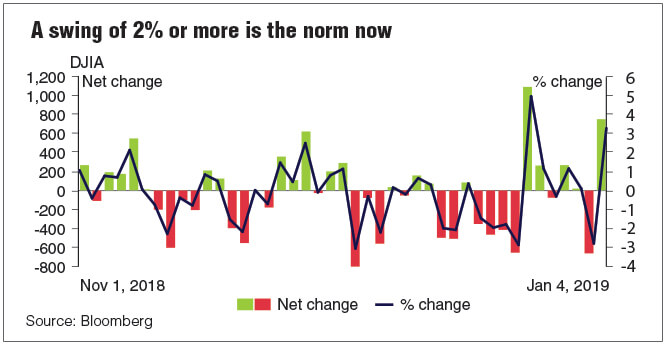 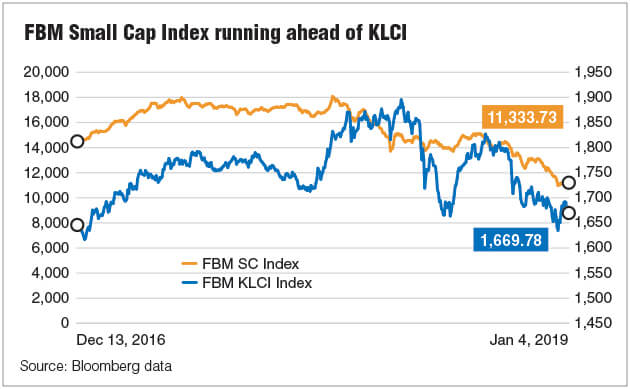 KUALA LUMPUR: A healthy dose of good news from the US, which has calmed recession fears and propelled the Dow Jones Industrial Average to jump close to 750 points last Friday, is expected to also spread joys to Asian markets today.

Sentiment in Asia is likely to improve in tandem with the sharp rise in the US markets for two reasons. First, the US Federal Reserve’s (Fed) chairman Jerome Powell said last Friday he would be “patient with any future interest rate hikes”. This gave an assurance that any decision on future rate hikes would have economic growth in consideration. This eases the concerns rising interest rates will derail growth in the US, and in turn global growth as well.

Second, there is a ray of hope that the trade talks between China and the US in Beijing today and tomorrow may have positive outcomes. Some quarters said the world’s two large economies may be more willing to reach an agreement given the signs of a slowdown in manufacturing activities, investments and corporate earnings. The recent significant drop in the stock markets would warrant both governments to act rationally.

On the home front, however, analysts and fund managers do not expect any frenzied buying as like on the Wall Street simply because of the absence of buying impetus domestically even though there are already attractive bargains, especially among mid- and small-cap counters.

In addition, corporate earnings are not expected to be exciting and a lack of clarity on government policy in terms of stimulating economic growth moving forward will continue clouding the domestic market outlook, let alone concerns over the government’s fiscal position and uncertainties on the local political scene.

Risk appetite has been waning on Bursa Malaysia, reflected in the weak buying interest despite a sharp drop in share prices.

TA Securities senior technical analyst Stephen Soo warned that the charts are indicating that a more severe correction may be on the horizon if external sentiments worsen since the domestic market is largely influenced by global factors.

His worst-case scenario would see the FBM KLCI slip to test 1,500 points.

“I’m looking forward to a V-shaped trajectory ... which could happen close to the third quarter [this year]. Hopefully, any selling will be quick one,” Soo told The Edge Financial Daily.

Inter-Pacific Securities head of research Pong Teng Siew noted that “bear market rallies are usually observed on the way down”.

“Some are significant rallies but eventually give way again,” he told The Edge Financial Daily, noting that the current downtrend will continue throughout the first quarter of 2019, “but beyond that, we [will] have to play by ear”.

“It is usually easier to tell the top [rather] than the bottom of the market,” Pong added.

Are the equity bulls back in full control now? The outcome of the trade talks between China and the US in Beijing will be a critical determinant.

Beside, Ang Kok Heng, the chief investment officer of Phillip Capital Management, noted that there are several key factors to keep an eye on. Ang pointed to the strength of the US dollar as one likely determinant of how far the stock market correction will go.

“In the event the US dollar weakens, emerging markets may rebound,” he said, noting that the strong correlation of some 80% between currency flows and equity flows.

US dollar movements are largely dictated by expectations of the Fed’s decision on its interest rate direction. Expectations of a pause in interest rate hikes may weaken the greenback as investment funds are likely to flow elsewhere to seek better returns.

Ang, on the other hand, warned that “investors may not want to invest because of currency volatility”.

Meanwhile, TA’s Soo said any further correction in the stock markets could even see a return of quantitative easing. He added that the Fed could pump liquidity back into the market if equity prices keep falling.

Mid- and small-cap stocks have been oversold

The KLCI is not on the brink of the bear market, but the mid- and small-cap counters are already in it.

Share prices of small caps have long been trading in bearish territory after the Bursa Malaysia Small Cap Index plunged as much 39.33% to a seven-year low last December after it most recently peaked in early January 2018.

“The small caps corrected ahead of the index. I don’t see much more room for [a] downside,” Soo said.

“It’s always a good time to do bargain hunting either during a volatile market, whether [with an] active trading stance or [by] using a buy and hold strategy,” he said.

In the second case, investors should “fish for stocks which pay good dividends and have a strong, shielded earnings outlook, [such as] the domestic and regional champions,” Mohd Redza added.