When less is more 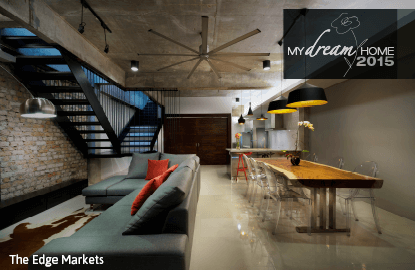 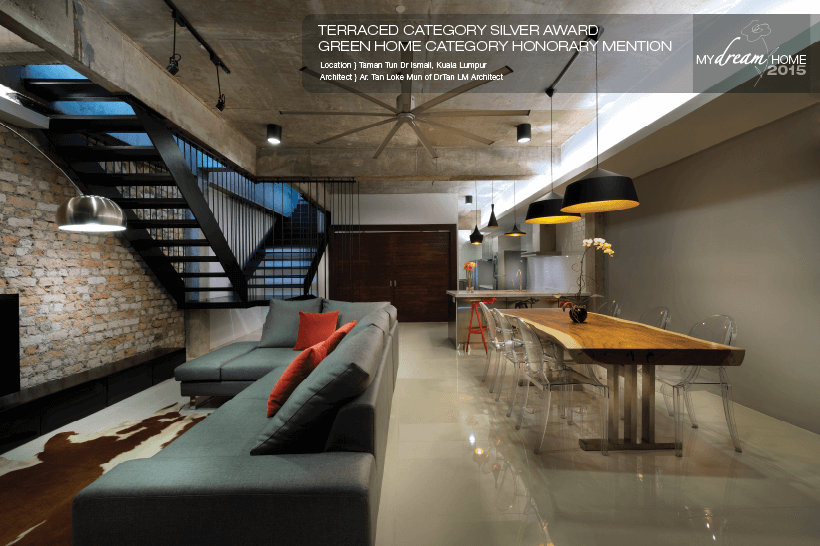 It began with a dog, a cocker spaniel that answers to the name Mr Jones. Architect Tan Loke Mun of DrTan LM Architect came across Mr Jones over the Chinese New Year holidays a few years ago and the brown-eyed canine appeared to have been abandoned. A search for a new owner led him to Andy Ong through a mutual friend. 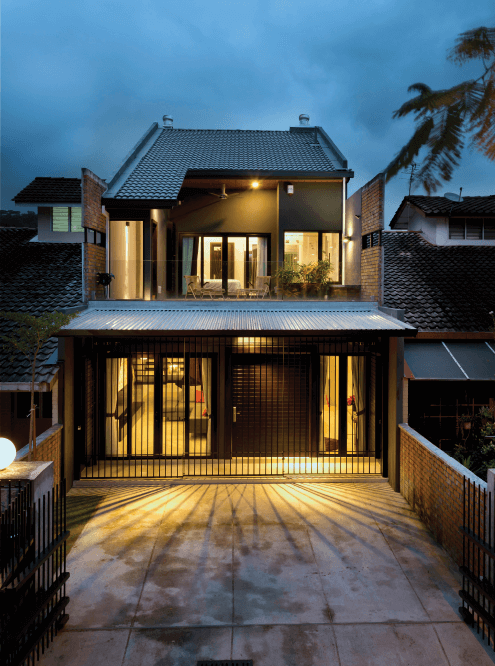 When Ong decided to move back into his childhood home in Taman Tun Dr Ismail, Kuala Lumpur, Tan was naturally his choice of architect. Ong’s family had lived there since the 1980s and though he moved out after getting married, the arrival of his daughter necessitated a larger living space. The original structure of the house — a single-storey terraced house with three rooms, two bathrooms and an air well — was insufficient to host his small family, his mother and their helper.

By then, Tan and Ong had established a good rapport and while Tan is usually associated with projects on a far larger scale, he agreed to redesign the house. “I haven’t done renovations on a terraced house in years, so I thought to use this as an experiment,” says the architect, striding quickly around the house and giving his work a looksee. “Andy was on a tight budget so there was a challenge of working within it to build a spacious, modern home, something that is in high demand today.”

The brief was simple enough — sufficient rooms for the five who would be living there and ample space for entertaining — with Ong entrusting all other details to Tan, who kept the side walls and tore down everything else when renovations began in 2012. Building code restrictions didn’t allow for the two-storey structure he had in mind to occupy the front of the house, so the second storey had to be receded. The benefit of that was, of course, a deep balcony that doubles as a rooftop garden. Cut-outs in the walls flanking the garden allow for a clean breeze to whip through and the view of the houses on either side averts claustrophobia. 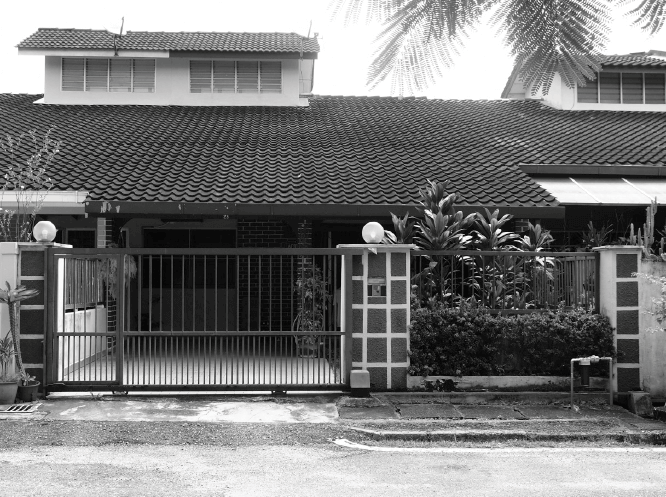 In fact, that illusion of space is repeated throughout the home, whose proportions are relatively modest. Renovations saw the back extended to make room for a wet kitchen and a largely open layout allows for seamless interaction of spaces, conducive for entertaining. The house can be accessed from one of two front doors — a sliding door or a beautiful, massive nyatoh door that pivots inward. Instead of being affixed immediately before the doors, the security grille is brought forward, allowing for a decent strip of space between the cement rendered porch and entrance.

Once inside, the raw expression continues in the cement walls and exposed brick feature wall — the original plaster was removed to reveal the masonry of decades ago, executed in salmon pink and cream bricks. The living room’s seating area faces this textured wall on the left, pointed towards the television, while a solid suar table marks the dining area behind it. Contemporary ghost chairs contrast with the classic wood, as do the 3D geometric bar stools in bold red and black set along the kitchen island. With stainless steel cabinets and a single slab marble top, the L-shaped island discreetly separates the kitchen from the social spaces. Above the counter, a double-volume air and light vent with a wind turbine keeps the house naturally bright and cool — a simple, elegant idea with great impact.

The only walls interrupting the otherwise completely open layout are those of the makeshift guest bedroom further down the hall. Its wide door is ordinarily folded open to showcase an upright piano and daybed. Even then, the wall it shares with the kitchen boasts a window to alleviate the feeling of being confined. When all the doors downstairs — each custom-made from solid nyatoh — and this window are open, there is a clear line of view from the entrance all the way to the kitchen, brilliant for cross-ventilation. 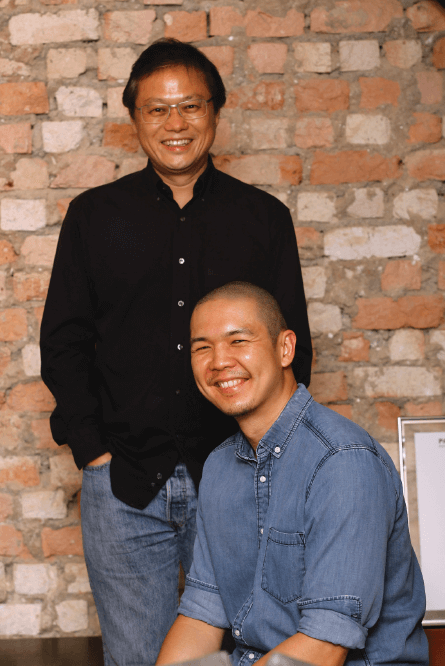 Arresting attention, however, is the suspended split staircase affixed between the living room and the guest bedroom. “It’s like a heavyset woman on heels,” says the cheeky Tan, explaining the load transfer physics that see the staircase rest on just two pins at the bottom. The rest of the weight is held by hanging steel rods in place of banisters, fashioning a suspended metal sculpture finished in sophisticated black. The left leads directly to the rooftop garden while the right to the three bedrooms, clearly distinguishing the communal and private spaces. Another light and air shaft is located just behind the stairs.

Solid belian timber forms the bedroom floors. In the master bedroom, a walk-in wardrobe was sacrificed in favour of a long glass-encased bathroom with marble tiles and countertops, with a red curtain which shields the glass from view should privacy be preferred. The window-side marble bathtub overlooks the street below, the tall trees lining it sheltering the view from the main road beyond. The bedroom mirrors the ground floor with its minimalist furnishings and neutral shades, its white lampshades and linen contributing to the impression of wide space and airiness. The sliding door opens out to the rooftop garden, where the Ongs enjoy working out and watching the quiet activity of the neighbourhood.

“Guests love hanging out here,” shares Ong. “Everyone comments it would be perfect for a barbecue and while we’ve had several parties here, a barbecue has never been done, funnily enough. I love that the house allows us to entertain often. We didn’t have any preconceptions about the end result. We’re just happy with how it turned out. It’s comfortable and welcoming.”

That it is, and the fact that it was done with a relatively modest budget of under half a million ringgit makes it all the more impressive. The confines of a terraced home aren’t felt here, every piece of furniture has a purpose and open space has been given priority. “Some of the accents we used are in vogue right now but will endure after the trends have turned, like the subway tiles we used for the kitchen walls,” says Ong. “We’ve even done some IKEA hacks, like what we did to the coffee table in the hall.” The IKEA table was painted gold and its top was upholstered for a more upscale appearance. While the décor is inexpensive, clever tweaks like this elevate the overall aesthetic.

Mr Jones runs around the house, sniffing out his playmate — Ong’s young daughter. Tail wagging and eyes bright and curious, he seems friendly and content. Why wouldn’t he be, after all — his world is perfect, here in this cosy home with his happy family. 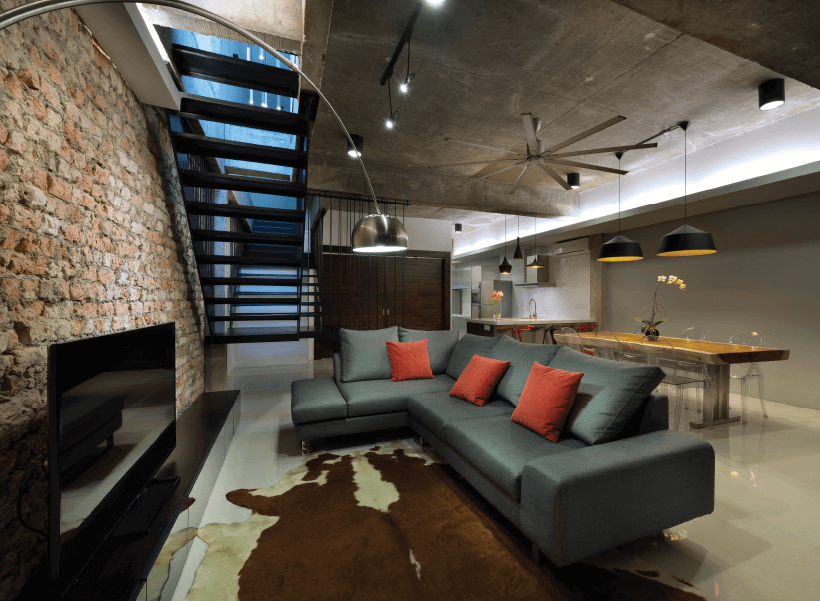