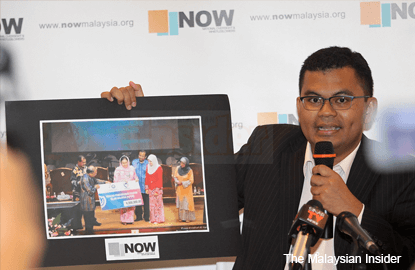 (Nov 27): Police must clarify under which provision of the law they are investigating anti-graft organisation, National Oversight and Whistleblowers (NOW), following its revelation of documents related to Malaysian Islamic Economic Development Foundation (Yapeim), lawyers said.

Lawyers Amer Hamzah Arshad and New Sin Yew said such a probe should not be initiated to instil a culture of fear among civic-conscious citizens to expose corruption and abuse of power.

Amer said investigators should notify whether they were investigating the group for theft or releasing classified information under the Official Secrets Act (OSA).

"Saying they are investigating NOW for 'unlawfully obtaining documents' is vague and so, the police need to clarify," he added.

He also questioned whether Yapeim's documents could be classified as government papers.

The lawyer said this in response to a statement by Inspector-General of Police Tan Sri Khalid Abu Bakar on Sunday that police have begun their investigations on the matter.

This came after a police report was lodged by the Yapeim chief executive officer Datuk Abibullah Samsudin at the Dang Wangi police headquarters on Nov 18.

However, Khalid said the Malaysia Anti-Corruption Commission (MACC) was investigating the misuse or abuse of power in Yapeim.

Abibullah said NOW's accusations against Yapeim were baseless and that the documents obtained by the group were obtained illegally.

He accused NOW director Akmal Nasir of spreading false information and distorting facts with the intent of defaming Datuk Seri Jamil Khir Baharom, who is the minister in the Prime Minister's Department in charge of religious affairs.

Akmal had alleged that Yapeim had used money, meant for orhans and the poor, to fund the minister's trip abroad involving a cost of between RM410,978 and RM590,000.

Jamil Khir has since denied the allegations and also filed a defamation suit.

Amer said the Whistleblower Protection Act accorded a shield to those who reported of wrongdoings to the authorities, like the police and the MACC.

"However, the law is silent when a whistleblower turns to the media, like in the case of Akmal," he said.

Meanwhile, New said it was the duty of the police to investigate once a report was lodged.

"However, investigators must determine whether and offence had been committed before proceeding further," he added.

New said the investigation officer could classify the case under an existing law, such as under the Penal Code or OSA.

He hoped the investigation against Akmal was not conducted to harass those who revealed wrongdoings taking place within an organisation or by those in positions of authority. – The Malaysian Insider