What else has 1MDB overpaid for?

In the Feb 17, 2014, issue of The Edge weekly titled “The 1MDB Story”, we had analysed the purchase of power plants from Tanjong Plc and Genting Bhd in 2012, which totalled close to RM10.85 billion.

Based on Edge Research’s calculation of the estimated internal rate of return (IRR) of the two group of assets (5.2% for Tanjong’s power assets and 0.5% for Genting’s power assets), this meant  that the entire portfolio of power assets now owned by 1MDB generates a weighted average IRR of roughly 4.0%. Clearly, such rates of return are not commercially viable by most yardsticks. First-generation independent power producers like YTL Power have IRRs ranging from 16% to 18% while the later ones have returns of around 10% to 12%.

Assuming that 1MDB should have rightly insisted on getting an IRR of at least 10%, it should have paid only RM8.20 billion for its power assets instead of RM10.85 billion.

We had asked why 1MDB was so generous in over-paying by RM2.65 billion (see Flashback 1). 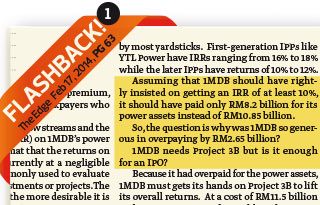 The article also said that the total cash flow from its power plants stood at just over RM1.0 billion per annum and while this was just adequate to service interest payments arising from the US$3.5 billion (RM11.20 billion) bonds it issued to finance the purchases, it will not be enough to repay the bonds in full when they are due in 2022 and 2023.

In response to that article, 1MDB issued the following statement a few days later to rebut our conclusion:

To give a more accurate representation and valuation of 1MDB’s assets, it is vital to have a more detailed knowledge of the operations and factor in other considerations such as precedent transactions for acquisitions of controlling stake, discounted cash flow, management expertise and potential growth of the business. Any valuation without detailed information is wrongly premised and inaccurate.

The statement did not give any figures like cash flow and the IRR of the power assets to challenge our figures. However, a news portal had a story in which an unnamed government source claims that 1MDB was getting a good double-digit IRR.

Was The Edge Research wrong when it concluded that 1MDB had paid more than it should?

No. We were right. This was proven in 1MDB’s FY2013 ended March 31 accounts that were delayed and only submitted to the Companies Commission of Malaysia (CCM) in April this year — two months after our article was published.

In Note 42.1 (i) to the accounts (see Table 2), the external auditor Deloitte Malaysia had assessed a goodwill of RM1.839 billion in the purchase of Powertek Energy Sdn Bhd (a subsidiary of Tanjong). Deloitte gave a fair valuation of RM6.903 billion for the assets that were purchased for RM8.485 billion.

Similarly, for the acquisition of Mastika Lagenda Sdn Bhd (the power asset unit of Genting), Deloitte gave it a fair value of RM1.712 billion, compared with the purchase price of RM2.342 billion. The goodwill arising came up to RM787.34 million (see Table 3).

Combined, the goodwill (which in accounting means the amount you have overpaid relative to fair value) came up to RM2.626 billion.

While the goodwill amount was RM2.626 billion, Deloitte provided for an impairment loss of only 55% or RM1.188 billion in 1MDB’s profit and loss statement for FY2013 (see Table 4). This is not unusual as it is very rare that auditors would impair the total amount of goodwill at one go. 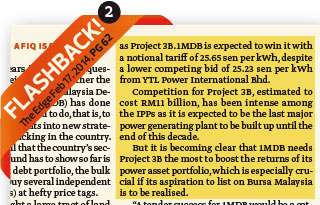 Interestingly though, if full impairment loss of RM2.626 billion were imposed, it would have totally wiped out 1MDB’s after tax profit of RM788.24 million — profit that itself was only possible after a land revaluation gain of RM2.3 billion.

As there is a remaining RM1.438 billion goodwill that 1MDB is still carrying from its purchase of the power assets, it would be interesting to see if Deloitte will impose an impairment loss again for FY2014 accounts, which are due at the end of October.

In the same article, we also concluded that in order to dress up the financial prospects of 1MDB and support its plan to list its power assets, the government, which owns 100% of the company via the Ministry of Finance, will have no choice but to award the 2,000MW coal-fired power project (dubbed 3B) to 1MDB. This, despite the fact that its bid was not as good as that submitted by YTL Power International Bhd (see Flashback 2).

That conclusion also turned up to be correct as on Feb 28, two weeks after our article was published, the Energy Commission announced that 1MDB had won the bid.

In The Edge weekly issue of Sept 22, titled “1MDB’s RM1.38 billion Penang land quandary”, we investigated the purchase of several parcels of land in the Air Itam district totalling around 260 acres in April 2013. We found that 1MDB had paid on average around RM110 per square foot (psf) for the land — nearly 100% more than a December 2011 valuation of RM57 psf.

As a comparison, according to the Ministry of Finance’s Valuation and Property Services Department report for 2013, the value of development land in Penang rose only 28 % over the two years from 2012 to 2013.

It was also discovered that the land had an estimated 1,200 “ground tenant” households, which have been occupying the land for more than 50 years, and moving them out will be a very expensive and tedious affair. The various parcels of land also had other owners who hold very little “portions”, without whose consent they cannot be developed.

1MDB has said it plans to build 9,999 affordable and low-cost homes on the land.

Based on the acreage of the land and the number of new homes to be built, a property consultant had estimated for The Edge that 1MDB may lose over RM1.0 billion if it were to go ahead.

These are the calculations:

Add land cost of RM1.38 billion and a  conservative relocation compensation of RM108 million for 1,200 ground tenants (RM90,000 per dwelling), and the total project cost (excluding interest incurred by 1MDB to finance the RM1.38 billion land purchase) will be around RM2.70 billion.

Based on these estimates, the potential loss to develop the various projects is RM1.25 billion.

And if 1MDB does not proceed, it will still be sitting on losses.

Assuming a conservative financing cost of 4.0% (1MDB’s average financing cost is higher as the cheapest it has obtained is 4.4%), interest payment on the RM1.38 billion it has spent to buy the land  works out to RM55 million a year.

In response to our article, 1MDB, using unnamed sources reported by another publication, denied it has overpaid for the land.

And recently, a “financial analyst” wrote an opinion piece in a national daily defending 1MDB. On the likelihood it could lose a lot of money building affordable homes after paying such a high land cost, the analyst wrote that “in line with its position as a government-owned entity, the company doesn’t undertake projects with the sole objective of making maximum profits”.

Well, government-owned or privately-owned, debts have to be paid and you can’t pay them off unless you make money.

It will be interesting to see how this RM1.38 billion land purchase will be accounted for in 1MDB’s FY2014 accounts that are due at the end of this month. 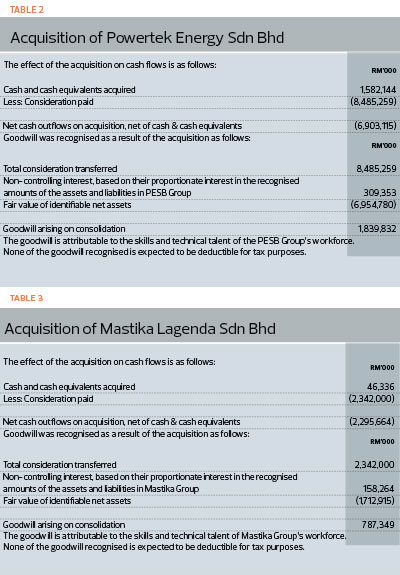