LOWER oil prices are a boon for airlines such as AirAsia X Bhd (AAX), the long-haul affiliate of budget airline AirAsia Bhd that flies mainly between Kuala Lumpur and several cities in Japan, China and Australia.

Yet, most analysts polled on Bloomberg have a “sell” rating on the loss-making AAX, with the more bearish analysts saying the stock should be worth only between 60 and 65 sen — at least 10% below current levels. Other than the nine “sell” calls, there are four “hold” recommendations among those who think AAX is worth between 72 and 79 sen.

AAX fetched RM1.15 a year ago, and has retraced some of its losses since hitting a low of 68.5 sen on July 7 this year.

According to Bloomberg data, Macquarie Capital Securities (Malaysia) Sdn Bhd has the sole “buy” call, with a target price of 83 sen as at Oct 15. This implies a 14.5% upside potential, from the 72.5 sen it closed at on Oct 21, being 1.58 times its net asset per share of 46 sen as at end-June.

Another structured warrant issued by CIMB, AAX-CO, trades at a smaller premium of 10.8% to the underlying stock to close at 17 sen on Oct 20. It has a strike price of 65 sen and one-for-one conversion ratio, and expires July 31, 2015. 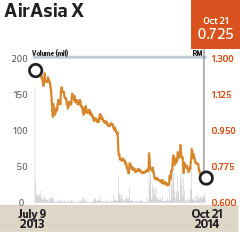 It remains to be seen if analysts would find reason to upgrade AAX post its third quarter earnings release in November. For the first half ended June 30, 2014, AAX made a RM140.07 million net loss compared with a RM17.89 million net profit for the previous half, even as revenue rose 38.45% year on year to RM1.42 billion.

Maybank Investment Bank Research’s analyst Mohsin Aziz expects AAX’s losses to persist in to the 2015 financial year, although the airline stands to benefit from Malaysia Airlines’ restructuring, “especially for its Australian and Chinese routes”.

“We forecast yield growth of 10% to 13% in 2015, driven by stabilisation and maturity of existing routes,” he wrote in an Oct 9 note, retaining a “sell” rating and target price of 62 sen.

This article first appeared in The Edge Malaysia Weekly, on October 27-November 2, 2014.