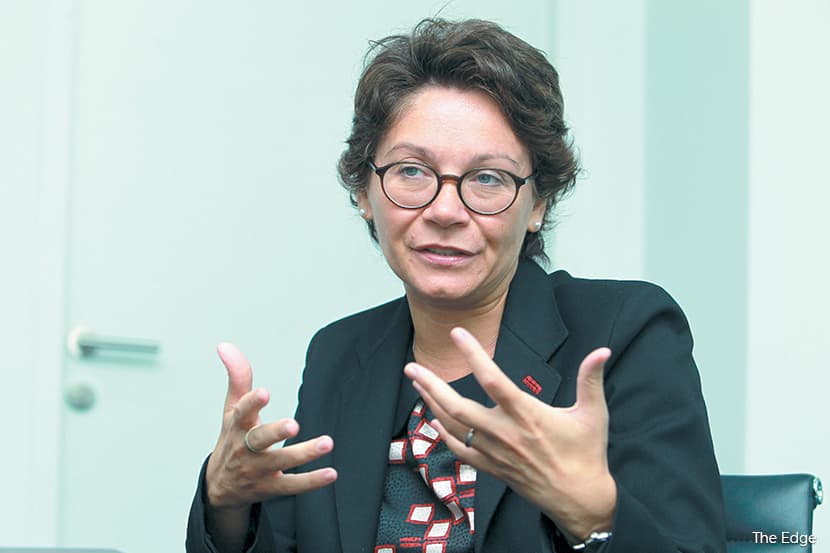 Our asset allocation is still biased towards risky assets, but we are allocating more money to quality assets than last year. While global economic fundamentals remain sound, market volatility is high, driven by political events that are hard to predict. ~ Berardi. Mohd Shahrin Yahya/The Edge

The ongoing trade war between US and China is expected to have a limited impact on China’s economic growth next year, says Alessia Berardi, Amundi London senior economist responsible for macroeconomic analysis.

imported goods in July this year, we expected the tarriffs to lower China’s gross domestic product by 0.1% to 0.2% to about 6.3%. However, our outlook has not changed after the announcement was officially made,

despite the fact that some research firms have lowered their projections further to about 6%.” China saw 6.7% GDP growth in the second quarter and 6.9% last year.

Berardi says this is mainly due to the change in China’s fiscal and monetary policies in the second half of this year to more accommodative strategies. The economy has also shown strong resilience in the first half of this year.

“On the fiscal side, you can see that the issuance of local government bonds has increased in the second half of the year compared with the preceding half to fund more infrastructure programmes.

“On the monetary side, it is reflected in the 0.5% cut in the reserve requirement ratio (RRR) by the People’s Bank of China , and more is expected to come. The PBoC is committed to keep sufficient liquidity in the system and has injected an amount of money corresponding to a further 0.5% RRR cut, soon after the last announcement of the implementation of tariffs.”

Despite the ongoing trade war, Berardi expects the US economy to grow steadily next year at 2.6%, 0.3% lower than the expected growth rate of 2.9% this year.

She says the US economic recovery has continued on the back of fiscal stimulus measures this year, mainly due to the corporate tax cut that lowered the country’s corporate tax to 21% from 35%. It is the most significant tax cut in the country’s history.

“Economic growth could continue until mid-2019 and this is why the Federal Reserve is expected to continue with its rate hike cycle,” she says.

Berardi says the economic growth of the world’s largest and second largest economies will continue to support global growth in the next 12 months. “Sound macro fundamentals are reflected in the positive corporate earnings globally.”

Bias towards risky assets, but allocating more into quality ones
Berardi advises investors to remain cautious on risky assets, including emerging markets equities and fixed income, even though the economic fundamentals of the global economy remain sound.

“Our asset allocation is still biased towards risky assets, but we are allocating more money to quality assets than last year. While global economic fundamentals remain sound, market volatility is high, driven by political events that are hard to predict,” she says.

For instance, Trump has announced US$267 billion worth of tariffs on China-

imported goods in September on top of the US$260 billion that has already been implemented. President Xi Jinping says the US is engaging in “trade bullyism” and China will not restart negotiations with the US unless talks are “based on mutual respect and equality”.

“There might not be an end [to the trade war] before the US mid-term elections, which will be held in November. It might continue to escalate and hamper growth in the emerging markets, which rely a lot on global trade flows,” she says.

Berardi says it is hard to assess the real impact of an escalating trade war on emerging markets as the US and Chinese companies could shift their manufacturing and production bases to emerging countries. These countries could be less impacted than previously thought and they might even stand to benefit.

“Countries that are more integrated into the global supply chain of the IT sector, such as South Korea and Taiwan, could benefit. The US imposed tariffs on various sectors in the second-round tariff announcement, including consumer goods such as furniture, leather and other lower value-added products. Some other emerging countries that have export exposure to the US, such as Malaysia and Thailand, could benefit,” says Berardi.

Brexit is another critical event that Berardi is keeping an eye on. The UK has yet to strike a deal with the European Union over trade and other issues, with the deadline being March 29 next year.

Prime Minister Theresa May said last month that a “no-deal Brexit” is preferable to accepting a “bad deal” proposed by the EU. This is while Jeremy Corbyn, leader of the Labour Party, suggested an early election to solve the political crisis. The Labour Party also backed the suggestion of having a second referendum on Brexit.

What should investors do?
Berardi says now is not a good time for investors to make directional bets when it comes to making investment decisions. Instead, they should lower their risk exposure while maintaining a risk-on mode.

For fixed income, Berardi says investors should allocate more of their money to bonds that are denominated in hard currencies, such as the US dollar, euro and yen, instead of local currencies that are volatile in uncertain times.

For local investors in Malaysia, Berardi says foreign investors are keeping an eye on the tabling of the federal budget, which is slated for November.

“We were surprised that the new government cancelled the Goods and Services Tax soon after the general election and introduced the Sales and Services Tax. The government needs revenue but, unfortunately, the two regimes don’t provide the same revenue.

“As such, it is important for us to see how the new government plans the federal budget for next year, and whether it can keep the country on the path of fiscal prudence. This is an important signal that it will send to the market.”

She adds that the country does not have a twin deficit and is enjoying a more than decent surplus on its external balance sheet. However, the surplus is lower than last year’s.

She points out that Malaysia is one of the countries within the emerging market universe that has a high external vulnerability, such as to an escalating trade war, compared with other emerging countries.