Walking down the aisle with penguins 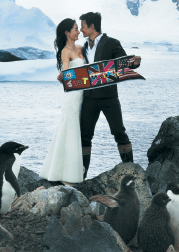 FROM walking down the aisle of a century-old cathedral to exchanging vows on Bali’s beaches, celebrities are vying to outdo each other in where they want to hold their nuptials.

Enter Taiwanese-American host Janet Hsieh, 35, and her Singapore-based actor-host husband George Young, 34, who granted his betrothed’s wishes to wed in one of the most exotic locations possible — the South Pole.

In a Facebook picture the couple can be seen holding what looks like a bunting with the words “Just Married!” sewn onto the American, British and Taiwanese flags, representing their nationalities. Standing around Mr and Mrs Young were their VIP guests — penguins.

Hsieh, the host of travel show “Fun Taiwan”, visited Ushuaia — the southernmost part of Argentina and the embarkation point for Antarctica — for work about four years ago but missed out on setting foot on the South Pole due to schedule complications. She vowed to bring her loved one and tie the knot in the exotic destination one day.

And the day finally came last weekend after the couple had embarked on a seven-week work-cum-marriage tour in December. They visited Hsieh’s birthplace in Texas and other places, including Argentina, before meeting with friends and family in Ushuaia to travel to Antarctica for their 11-day wedding affair.

Hsieh and Young met in Taiwan in 2004 when Young, the offspring off a Greek mother and a Malaysian Chinese father, was shooting a commercial. Both were represented by the same modelling agency.

The pair had been roommates when Young was working in Taipei, but remained just close friends until about a year ago, when Young was down with a fever while in Taiwan over the New Year. Hsieh, who rarely cooked, made him a mushroom-and-garlic soup as well as a chicken salad, enough to set them both on the path to romance.

Taiwanese media reports said the price tag on a wedding in the South Pole cost a hefty NT$33 million (RM3.76 million) but the couple only needed to foot NT$3 million in bills thanks to sponsorships.

Home-grown actor Melvin Sia, 36, had his first taste of success in Taiwan after acting in idol drama “The Way We Were” alongside big names like Ruby Lin Xin-ru and Yang Yi-zhan.

His popularity soared with strong ratings and positive reviews of the two new dramas he is starring in — “Dear Mom” and “Boysitter”.

His path to greater stardom however hit a snag when Taiwanese media speculated about ties with a male friend. His friend had posted pictures on a social networking website that purportedly showed them behaving intimately.

Sia later responded with a posting on his Facebook page, writing in English: “Thanks for all the write-up and concern from the media. Many friends told me that I’m popular ... To be frank, I focus on my work and keep avoiding gossip as well as unpleasant news ...

“I’m still who I am, and will not isolate myself just because of this. I’m keeping my fingers crossed that the world will be kind to me.”

The Sarawakian studied architecture at Universiti Teknologi Malaysia before joining the Malaysian regional edition of “Star Search” in 2003.

In 2012, Sia debuted in the China drama scene by taking the lead role in “Love Destiny”, followed by an entry into Taiwan showbiz a year later.

This article first appeared in The Edge Financial Daily, on February 6, 2015.