At the National Aquatics Center in Beijing on Monday night, Li handed the keys of the carmaker’s latest Geely GC9 sedan to members of the Chinese national swimming team, which the company is sponsoring. The carmaker will replace its Emgrand, Gleagle and Englon marques introduced in 2009 and market all future models under the single Geely brand.

The Hangzhou, China-based automaker will also concentrate on creating “refined cars” instead of making “good-yet-affordable” autos as it seeks to stand out in the world’s largest auto market, according to the company. Li is embarking on the revamp as the carmaker’s sales slumped 22% last month from a year earlier amid a broader slide in market share by home-grown marques to foreign brands led by Volkswagen AG and General Motors Co.

“Chinese can not only make cars, but are also capable of making good cars,” An Conghui, chief executive officer of Zhejiang Geely, told reporters at the event on Monday. “We are using the very best designers the automotive world offers to create a new global design language.”

Geely Automobile Holdings Ltd, its Hong Kong-traded unit, declined 17% this year through Monday, compared with a 1.2% drop in the benchmark Hang Seng Index.

The GC9 sedan, which comes in three engine variants starting from 1.8 litres, will begin sales in March and is crafted by former Volvo Cars design director Peter Horbury. He crossed over to Geely after Li bought the Swedish carmaker from Ford Motor Co in 2010.

“Geely and other local carmakers have to make a breakthrough and move up the food chain by introducing more sophisticated models,” said analyst at Guotai Junan Securities Co Harry Chen, who has a neutral rating on Geely Auto.

“It is challenging as the GC9 is targeting a segment dominated by foreign players, but they have to tough it out. By consolidating the brands, the company can save costs on marketing and enhance efficiency.”

Geely Automobile Holdings on Monday plunged in Hong Kong trading after saying it expects full-year net income to fall about 50% because of the slumping Russian currency and declining sales.

Geely tumbled as much as 22%, the most since 2008. Depreciation of the ruble resulted in an unrealised foreign-exchange loss from operations in Russia.

“The company has fundamental weaknesses in brand, product and distribution,” said Max Warburton, a Singapore-based analyst at Sanford C Bernstein & Co, which has an underperform rating on the stock. “We do not believe Geely is set for a period of particularly strong growth or transformed earnings, and it is our view that cooperation with Volvo remains minimal.” — Bloomberg 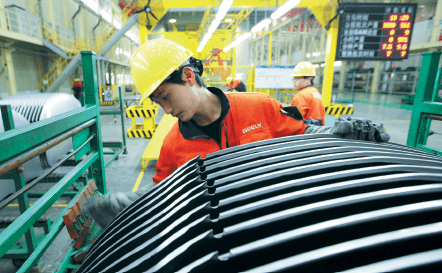