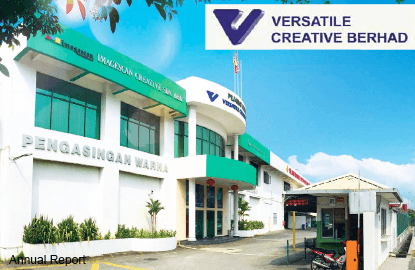 KUALA LUMPUR (June 3): Versatile Creative Bhd saw 7.3 million shares, equivalent to a 6.22% stake, in the company crossed off market today at a steep discount of 65.6% compared to its market price.

According to Bloomberg data, the shares were moved in five blocks for a total value of RM3.94 million or 54 sen a share.

The counter closed one sen higher at RM1.57 today, for a market capitalisation of RM184.22 million. The open market volume was thin at 290,900 shares.

The buyers and sellers of the shares were not immediately known.

According to Versatile Creative's 2015 Annual Report, Iris Corp Bhd was the largest shareholder with 43.81 million shares or a 37.34% stake held through subsidiary Iris Healthcare Sdn Bhd, as at July 29, 2015.

Last month, Iris disposed of a nearly 30% stake in Versatile Creative for RM21 million, to pare down borrowings.