Venture: Fashion Valet’s ambitions will never be just about e-commerce 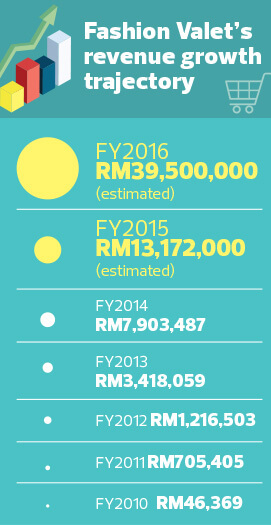 IT is the quintessential start-up story. In the last six years, Fashion Valet has grown from a fledgling e-commerce site, which was born from co-founder Vivy Sofinas Yusof’s popular blog, to a regional omnichannel fashion platform. From the outside, Fashion Valet’s growth momentum can be seen just by looking at the way it has expanded.

Today, the platform stocks products from some 500 Southeast Asian designers and ships all around the world. The company has offices and warehouses in Malaysia, Indonesia and Singapore. It has also gone offline, rolling out physical stores, with two in Malaysia (Pavilion Kuala Lumpur and Bangsar Village II), one in Singapore and a pop-up store in Brunei.

Vivy, Fashion Valet’s chief creative officer, is somewhat of a cultural icon, particularly among young Muslim women. She has almost a million followers on Instagram and her own reality television show called Love, Vivy, which is now in its second season.

And if Fashion Valet needed yet another endorsement for its growth potential, Vivy and her husband, co-founder Fadzarudin Shah Anuar, were recently admitted into the very select network of Endeavor, a global entrepreneur support network that works only with high-growth, high-impact companies. (see accompanying story)

Apart from the externalities, Fashion Valet is also seeing strong growth momentum in terms of its business. Fadzarudin says the company has grown revenue fivefold over the last two years. In fact, revenue increased threefold in 2016 and is estimated at almost RM40 million.

“We look at growth rates not in percentages but in multiples. We know that as the numbers grow, it won’t be easy to sustain that growth rate but we still set ourselves very high targets,” Fadzarudin says.

For 2017, Fashion Valet’s target is to double revenue from a year ago and be profitable on a net level for the first time. It is guided by a three-year plan that is re-forecast annually, and Fadzarudin believes the company still has a lot more room to grow in its existing markets.

At this point, over 60% of Fashion Valet’s sales come from Malaysia. Outside Malaysia, its two biggest markets are Singapore and Brunei. The next market that Fashion Valet is eyeing for expansion would, naturally, be Indonesia, but this is a competitive and challenging market.

One big advantage Fashion Valet enjoys in Malaysia is Vivy’s large and loyal fan base, cultivated over years of blogging at proudduck.com. Outside her home ground, Fashion Valet works with social influencers to raise the profile of the brand. It also collaborates with popular celebrities and designers to create exclusive products and collections.

Unlike other more mass-market fashion e-commerce platforms, Fashion Valet positions itself in the premium segment, peddling access to some of Southeast Asia’s most interesting designers. Though its staple is womenswear, it recently launched three new categories: bridal, menswear and children’s apparel. It also stocks cosmetics, accessories, shoes and bags.

“We want to be a platform where designers can showcase all their things, not just womenswear. That is why we created the other categories. But in reality, we know our main market is still womenswear,” says Vivy.

After all, the vast majority of Fashion Valet’s customers are women, specifically urban, working women aged between 25 and 40.

Yet, increasingly, Fashion Valet has seen changing customer profiles, thanks to Love, Vivy. The reality television show has brought in more customers from outside the urban areas of the Klang Valley and Johor Baru. Its physical stores have also given it access to customers who shop offline.

“After we launched our offline stores, we saw older customers coming in who had never heard of Fashion Valet before,” she says. “We are one of the only multi-label e-commerce platforms that is omnichannel.”

Amid all this growth momentum, Vivy and Fadzarudin are trying to expand their business beyond just distributing goods online. They certainly don’t see Fashion Valet as a pure e-commerce platform. For starters, FashionValet.com is merely the platform where the company distributes and sells local designers’ goods, Fadzarudin says.

“Our goal is to try to be like the LVMH of Southeast Asia, where we are more invested in the brands we partner. FashionValet.com is just the first step. There are other things we are planning to do,” says Fadzarudin.

This includes playing a bigger role in supporting local designers and brands, such as being more involved in strategic direction and operations as well as linking them up with manufacturers. It could also involve Fashion Valet taking equity in some of the brands.

One example Fadzarudin cites is a local ready-to-wear brand called “aere” that was started by popular blogger Raja Nadia Sabrina.

“The brand aere started from scratch and is now consistently in our top five best-selling brands every month. So, we are looking for other brands to invest in, but it is not something we are rushing into,” Fadzarudin says.

Fashion Valet could be well-positioned to support designers from the experience gleaned from launching its own in-house brand “dUCk”. The brand is best known for its premium headscarves and will roll out bags, cosmetics and stationery as well.

Vivy knows full well that many designers may be very talented at designing apparel, but find it challenging to deal with the business side of things, including finance, manufacturing and marketing. This is where Fashion Valet could come in. Already, Fashion Valet is working with designers and brands to craft the right brand story.

Fadzarudin notes that for consumers today, it is not just about buying a product but buying into values and a lifestyle. This is important to cultivate brand loyalty, as three-quarters of Fashion Valet’s sales come from returning customers. “We see that once brands get their marketing and branding right, they can grow their customer base very quickly. People like to buy from brands that they feel share the same values and are part of a like-minded community,” Fadzarudin says.

E-commerce may be a lot about pushing sales and volume, but both Vivy and Fadzarudin prefer to focus their energy on supporting local designers and fashion brands.

This was a crucial strategic decision they had to make midway through one of their many engagements with Endeavor Malaysia. Who should Fashion Valet prioritise — customers or brands?

“One question [we were asked and] didn’t know the answer to was: ‘Who is your priority? Brands or customers?’ If customers are our priority, then we cater for what they want to see and buy. But then, the brand story of Fashion Valet will die because it would be whatever the customer wants.

“Then, we realised that we were a platform for brands to showcase their creations to customers. If you prioritise the brand, the business will go in a completely different way,” says Vivy.