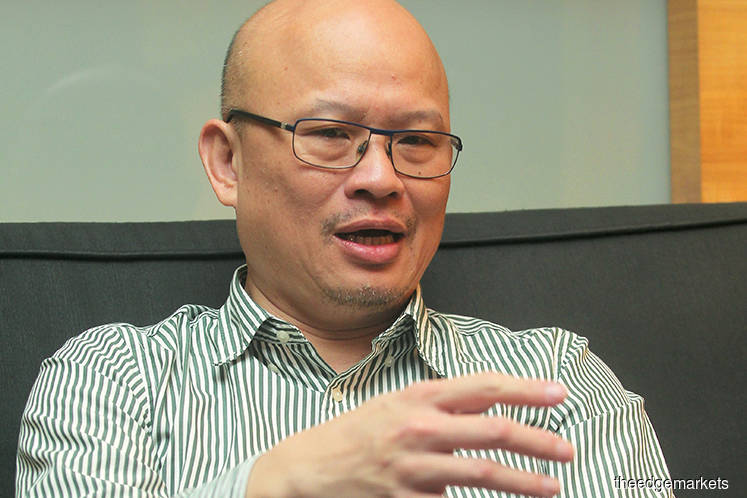 Technology companies that are run or chaired by their founders are creating new value and making the most impact across the world, says Ong Peng Tsin, managing partner at venture capital fund Monk’s Hill Ventures.

He observed this trend when he was studying a list of the 10 most valuable companies in the world last year and this year and discovered that the seven tech companies dominating the ranks were either led or chaired by their founders.

“The seven tech companies in the 2017 list collectively made about US$3.77 trillion — almost US$1 trillion more than the US$2.79 trillion made by the eight non-tech companies back in 2012. When I was drawing out the chart last year, I was focusing on tech. It was only a few months ago that I noticed that most of the companies [both tech and non-tech] were founder-led,” says Ong.

From a broader perspective, many of the top 1,000 most valuable companies are in tech. That is something governments and investors must take note of.

“The list does not include biotech and financial technology (fintech) companies — just pure internet software tech ones. So to me, it is obvious that if you [a government] are running an economy and not thinking about this, then you are not addressing the elephant in the room,” says Ong. He points out that a lot of tech venture capital companies and funds are consumer-centric because that is where the initial value is created in emerging markets.

This can be seen from the recent statistics, says Ong. This year, the seven most valuable companies in the world are technology players — Alphabet (Google), Amazon, Facebook, Alibaba Group, Tencent, Apple and Microsoft. In the previous corresponding quarter, only the top four were tech companies. This was in stark contrast to 2Q2012, when only two tech companies were among the top 10.

These numbers solidify the firm’s position on backing founders first before other factors such as companies, sectors, business models or technologies — hence the firm’s tagline, “Entrepreneurs backing entrepreneurs”. Ong, a former entrepreneur himself, formed Monk’s Hill in 2014 after spending about three years in China as a partner at GSR Ventures, a venture capital firm that invests in early-stage tech companies.

He was one of the speakers at the Wild Digital SEA 2018 conference earlier this month. He says the majority of these companies have created deep value with “shallow technology” and that the deep value creation is done on a global scale in the consumer and tech sectors.

“They started with shallow tech, but later became deep tech disruptors. These companies are founded by entrepreneurs,” says Ong.

He adds that deep tech companies — such as those that specialise in artificial intelligence (AI), cleantech (companies that deal in energy, water, transport, agriculture and manufacturing) and medical technology (medtech) — create value by producing new technology and not by disrupting business models. But in the long term, they do not necessarily lead to deep value.

“Between 2003 and 2006, some 170 ventures [focusing on AI tech and medtech] were founded. Last year, only 12 of them remained, with an average internal rate of return (IRR) of 1%. For cleantech investments, from more than US$25 billion invested, more than half was lost, according to MIT Energy Initiative. The IRR for cleantech specifically stood at 1.6%, compared with 19% from other early-stage deals in 2012,” says Ong, adding that he was involved in the earlier wave of AI companies.

Monk’s Hill, which invests in post-seed stage tech start-ups in Southeast Asia, has funded 17 companies through its US$85 million fund. According to Dealstreet Asia in May, the firm is raising US$120 million through a new fund to continue investing in early-stage and Series A and B funding rounds as well as help companies outside Asia to expand into the region.

“We are looking for investors with at least an appreciation of a few things — entrepreneurs, value creation by entrepreneurs and Southeast Asia. They also need to have some level of understanding or be willing to learn what a tech venture capital fund does,” says Ong.

“Very few people take millions of dollars from you and do not return the money until 10 years later. That is what a venture capital firm does. Investors can be from anywhere in the world, but we prefer institutional investors that understand the business.”

Nevertheless, some of its investors are family offices as well as strategic investors. The firm’s target IRR is in “the north of the teens”, says Ong. “It is way beyond your standard. We can provide investors with a very significant liquidity premium.”

Founder-led companies are also some of the largest in China. Ong says almost all the unicorns [privately held start-ups valued at more than US$1 billion] that GSR funded during his stint in China were led by their founders. He cites one of China’s biggest travel search engines, Qunar, as an example. The company was listed on the Nasdaq in 2013 and bought by a private equity firm last year.

“Once you scale a company to that size, there are really no bad entrepreneurs. When you see someone raise enough money, despite having problems, they must be doing certain things right. Perhaps a lot of things,” says Ong.

“Most of the failings at that level are related to ethics, ego, greed and all that. Perhaps they got too greedy and started fighting with other people. It is incompetence in terms of not having their ego in check, but not technical incompetence.”

Monk’s Hill led a Series A funding round for Singapore-based e-commerce logistics provider Ninja Van in 2015. Four years ago, the founders were just “kids in their mid-twenties with some ideas” but today, the company’s revenue has grown substantially, says Ong.

“They probably employed 8,000 to 10,000 people and raised more than US$100 million so far. They are very smart, driven and have a certain level of integrity,” he adds.

Ong notes that company founders who do these are few and far between. “People are lazy in general. You do not want to work hard and try to find shortcuts that sometimes do not work. You have to be strategic and hardworking,” he says.

However, backing founders does not always lead to success. At Ong’s previous firm, he discovered that an entrepreneur had forged the signature of one of his partners. The firm then exited that company.

“Try as one might, there are really bad people who are good at being bad to the point where you cannot tell the difference. So, the older I get, the less I trust my instincts about people. If I read them negatively, then I am probably correct. [And] if I read them positively, I assume that I am missing something and that is where we do our due diligence,” says Ong.

This sort of dishonesty can be more common in emerging markets than in developed ones. “When I was in the US, in Silicon Valley, the value creation by tech companies was not crazily huge and it did not attract a lot of people who were just going after the money. A lot of the tech people were very idealistic as they were thinking about changing the world and all that,” he says.

Ong says it is now becoming “cool” to be an entrepreneur in Southeast Asia. This is due to the allure of being able to scale a company in a short period of time. “You do not need 30 years to do it and that inspires a lot of people — sometimes for the wrong reasons — which is a problem. But I think this generation cares a lot about meaning and purpose. I always tell people that if you are investing in an emerging market, you are an impact investor because these investments will help the economy become more efficient, provide more choices, drive down costs and increase accessibility. A lot of us in tech do what we do because of what we could achieve and impact,” he adds.

Ong says Monk’s Hill also employs a “view strategy”, where it creates views on different parts of the market. For instance, the firm has a positive view on lending and education. “That being said, I am open to ideas because I could be wrong,” he adds.

Lending may seem boring, but Ong believes that the gap in Southeast Asia is more than US$100 billion a year. The interest rates in the region are in the double digits but in Japan, it is about zero.

“It is a data problem. There is no information on creditworthiness. If we are able to solve this problem, millions of small and medium business owners will be able to afford loans to build their companies faster,” says Ong.

“This translates all the way down. Costs would drop across the board because capital costs money. But with [the help of] technology, it could be cheaper.”

About 70% of the Southeast Asian population are unbanked because traditional banking requires physical offices or branches, says Ong. Also, the various equipment and know-your-customer (KYC) solutions are costly, which translates into high service charges.

“What if you could get rid of all of that? You do not actually need all these physical things, except for maybe the ATM to get cash. And that is if you have yet to figure out digital cash. Money and banking could be totally online. If we do that, financial inclusion will increase tenfold in the region,” says Ong.

If he were to create a strategy for Malaysia, he would measure the number of start-ups funded by professional seed or Series A funds every year, track the numbers and figure out how to crank them up. “Currently, there are only dozens of companies created annually in Kuala Lumpur and if you multiply that by 10, you will see unicorns almost every year. If you have, say, 500 start-ups a year, a certain level of filtering out needs to be done,” says Ong.

“You bet on 100 projects and half of them could possibly die. But 10 of them would give you the bulk of the returns while two or three would make you rich. That is the business of innovation.”