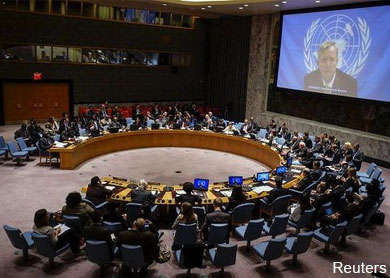 All three countries campaigned unopposed for their seats after being chosen as the candidates for their respective regional groups, but still needed to win the votes of two-thirds of the General Assembly to secure their spots.

The only contest was between New Zealand, Spain and Turkey for two seats given to the Western European and others group. New Zealand won a seat during the first round of voting with 145 votes. Spain beat Turkey in a third round of run-off voting.

Venezuela last tried to join the 15-member council in 2006, but failed to win the required two-thirds support of the General Assembly during dozens of rounds of voting after the United States campaigned against its bid. Washington did not stand in the way of Venezuela's bid this time.

"This is the victory of Hugo Chavez Frias. Chavez keeps winning battles in the world ... It's a day in which the world has supported our fatherland," Venezuelan President Nicolas Maduro said minutes after the vote in a nationally televised address.

The U.S. campaign in 2006 was in response to then socialist leader Chavez who compared then U.S. President George W. Bush to the devil, saying on the U.N. General Assembly podium that he could still "smell sulfur" a day after Bush's address.

Venezuela will likely use the council seat as a platform to aggressively back allies such as Syria and Russia in their diplomatic wrangling with the United States, part of its broader effort to continue the anti-Washington foreign policy of the late Chavez. It has even named Chavez's daughter, Maria Gabriela Chavez, as its deputy ambassador to the United Nations.

The OPEC nation of 29 million has consistently opposed U.S. diplomatic initiatives. It backed Russia's annexation of the Crimean Peninsula, which was formerly part of Ukraine, and it provided fuel to Syria amid its battle against insurgents. Venezuela has also built up cooperative ties with Iran despite strict sanctions imposed by Western nations.

"The Latin American and Caribbean countries have done a great disservice to the cause of international peace as well as helping a rogue military-civilian dictatorship gain a world stage," said Venezuelan opposition figure Diego Aria, who was the country's U.N. ambassador in the early 1990s.