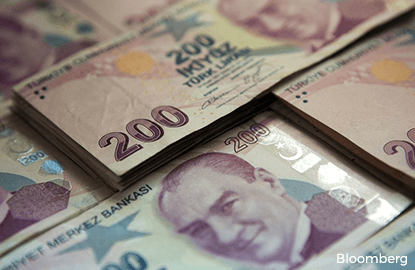 Some of the most beaten-down emerging market currencies, such as the lira and the Mexican peso, made some decent gains in early trading after the US dollar weakened 0.2% against a basket of currencies.

Traders said comments by US President-elect Donald Trump that the US dollar was too strong had provoked a broad re-think of the US dollar strength that has dominated currency markets in recent weeks.

Trump's failure to offer any details on his proposed fiscal expansion has also disappointed US dollar bulls.

The lira, which is down around 7% so far this year on concerns over Turkey's political and economic outlook, firmed as much as 0.7% before retreating again to trade flat, with the central bank declining to open a one-week repo auction for a fourth consecutive day.

It also withdrew price quotations for the Borsa Istanbul repo market after providing some funding at 8.5%, forcing banks to borrow using its "late liquidity window" at 10%.

Lira weakness means that Turkish inflation could reach double digits in the first quarter for the first time in almost five years, putting more pressure on the central bank to raise interest rates.

"The central bank is reluctant to hike rates properly and is trying to tighten liquidity conditions via various measures, but in terms of credibility it doesn't work," said Guillaume Tresca, a senior emerging market strategist at Credit Agricole.

Financial markets are keen to see a sharp rise of 200–300 basis points at the central bank's next meeting on Jan 24 but Tresca said the market could be disappointed.

"They need to send a signal they are ready to do something ... they need to shock the market," Tresca said. "75 basis points is not enough."

The Mexican peso also firmed 0.8% after slipping over 1% on Monday.

The peso had been clobbered by Trump's threats to slap tariffs on German carmakers, which are stepping up production in low-cost Mexican plants. A central bank official said Mexico could not rule out further forex interventions to deal with volatility.

"We are still quite concerned — we don't know what Trump will do, and it will be driven by Trump," said Tresca, adding that short positions in the peso were still quite large.

The South African rand was amongst the strongest currency performers, firming 1.4%, whilst the Russian rouble gained 1.1%.

The rouble was helped by a rise in oil prices to over US$56 a barrel and end-of-month tax payments, where Russian exporters convert a portion of their foreign currency revenues into roubles.

The Chinese onshore yuan also gained 0.5%, whilst the offshore yuan rose 0.7% to a more than one-week high.

China will reduce its 2017 economic growth target to around 6.5% from last year's 6.5–7%, reflecting a policy shift from supporting growth to pushing for reforms to contain debt and housing risks.

Appetite for riskier emerging market assets was also boosted by a fall in US 10-year treasury yields, which helped the benchmark emerging stocks index climb 0.7% after two days of losses.

Hong Kong stocks were amongst the best performers in Asia, rebounding 0.5% after suffering their biggest one day loss in a month on Monday. Mainland Chinese stocks gained 0.2% and Korean stocks rose 0.4%.

But emerging Europe delivered a more mixed performance ahead of a speech from British Prime Minister Theresa May in which she is expected to lay out more detail of her plan to exit the European Union.

Brexit is an issue for some Eastern European economies because it could mean a fall in their financing from the EU.

The first hearing in a US$3 billion eurobond dispute between Moscow and Kiev will kick off in an English court on Tuesday after Moscow asked the High Court for a summary judgment.

Ukraine's finance minister Oleksandr Danylyuk said he hoped Ukraine would continue receiving US support, including financial and military assistance, under the incoming Trump administration even if the latter boosts ties with Russia.

Ukraine's central bank said it would sell up to US$100 million on Tuesday to support the hryvnia, which was 0.4% firmer but still trading around two-year lows against the US dollar.

In eurobond issuance, Egypt will begin meetings for its US dollar bond today, following hard on the heels of Argentina on Monday.