US CEOs meet with Trump amid tension over his policies 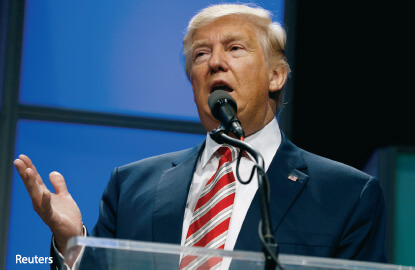 WASHINGTON (Feb 3): Chief executives of major US companies arrived at the White House to huddle with President Donald Trump on Friday as the business community finds itself increasingly split over how to respond to his policies, especially a travel ban announced last weekend.

Elon Musk of Tesla Inc, Mary Barra of General Motors Co, Indra Nooyi of PepsiCo Inc, Jamie Dimon of JP Morgan Chase & Co were among chief executives on a business advisory panel selected by Trump in December who were spotted entering the building.

"We're going to talk about how to create jobs, how to create wealth in America. We want to support that agenda," former Boeing Co chief executive Jim McNerney told reporters.

Trump previously met with executives from the US pharmaceutical and auto industries as part of a push to step up US job creation.

Business leaders have been divided in their approach on taxes and immigration and who seek to work with a president who uses his platform to attack companies that vex him, such as threatening penalties for manufacturing outside the United States.

Musk said on Thursday he would raise objections during the meeting to a week-old executive order halting travel to the United States for people from seven Muslim-majority countries.

On Thursday, Uber CEO Travis Kalanick quit the group under pressure from activists over the order.

Tech companies, which have broad concerns about Trump's immigration plans, raised the sharpest outcry at the travel ban.

The White House said in a statement on Thursday evening that did not mention Uber that Trump "understands the importance of an open dialogue with fellow business leaders to discuss how to best make our nation's economy stronger."

Executives from Ford Motor Co also criticized the ban, but others, including General Motors and JPMorgan Chase have not taken a position.

On Friday, former General Electric Co leader Jack Welch said on his way into the White House that he expected immigration would come up.

A more complicated division is developing over taxes. Boeing Co and General Electric on Thursday joined a group in support of a congressional plan to tax all imports. But that plan, which does not have universal support among Republicans, is opposed by many US retailers, which say it could raise prices for consumers.

Republican leaders say tax reform is a top priority, but they have acknowledged it could take until the end of 2017 or longer to finish legislation.

"If I were a company, I'd be worried about tax reform," said Bernie Williams, chief investment officer at USAA Investment Solutions, in San Antonio.

The White House meeting with the group, which also includes leaders of the Cleveland Clinic and IBM Corp, is set to cover tax and trade, regulatory relief and infrastructure.