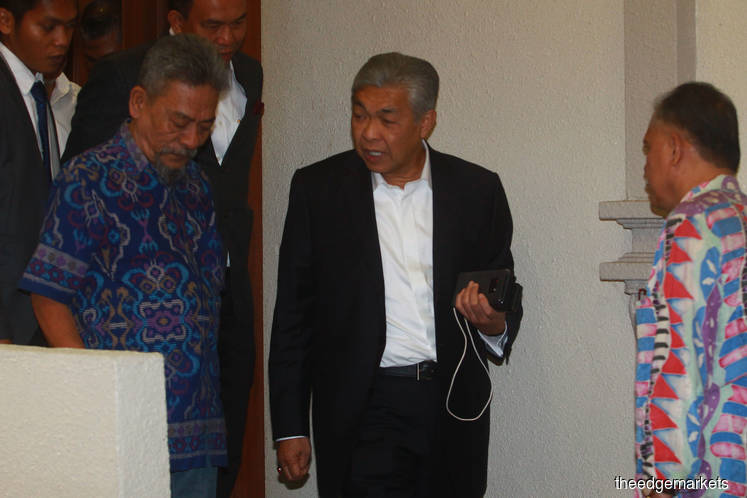 KUALA LUMPUR (Feb 14): Of the 30 public projects worth RM3 billion that Datasonic Group Bhd secured, about two-thirds of them were granted by the Home Affairs Ministry, the company’s former managing director Datuk Abu Haniffah Noordin told the High Court today.

Abu Haniffah, who has sold his equity stake in Datasonic, revealed this when reading out his witness statement during the graft trial of former Deputy Prime Minister and Home Minister Datuk Seri Dr Ahmad Zahid Hamidi involving the misappropriation of millions of ringgit from Yayasan Akalbudi, a charitable organisation.

Zahid is facing 47 charges — 12 for criminal breach of trust, eight for bribery and 27 for money laundering — in the case.

“The company, among others, was involved in the supply of MyKad between 2010 and 2019, the Malaysian international passport from 2015 to 2021, the supply of CCTV to several local councils in Penang, besides processing debit and credit cards for several Malaysian Banks,” Abu Haniffah said when naming some of the projects the e-government service provider had secured from the Ministry.

Abu Haniffah, who was also previously Datasonic’s chief executive officer, said he had met Ahmad Zahid several times in his dealing with the Ministry.

He also admitted that he once signed a letter addressed to Zahid on Oct 9, 2014 from Datasonic about the supply of passport chips, as the company's chairman Tan Sri Hashim Mohd Ali was not around. Similarly, he signed a letter that Datasonic sent to the Ministry's deputy secretary-general, Datuk Wahab Mohd Yasin, on the same project, on March 31, 2015.

However, he claimed he did not know what was the outcome of both letters.

Seven months later on Oct 19, 2015, Abu Haniffah said the company told the Ministry it was willing to reduce the value of the project to RM337.87 million from the initial price of RM344.5 million.

Subsequently, the Ministry issued an acceptance letter to Datasonic's proposal on Dec 15, 2015. "I signed on page four of the letter of acceptance,” Abu Haniffah said.

However, until today, Datasonic has yet to sign a contract for the supply of the passport chips as there were problems in interpreting the job scope, which was not stipulated in the letter of acceptance, he said.

He also admitted that he signed two company cheques — one for the amount of RM1 million and another for RM5 million — without knowing who the recipients were. He said the placement of the recipients' name on the cheques was handled by the company's financial advisor at the time, Chew Ben Ben.

“I do not know why the payments was made to the law firm Lewis & Co, as I thought they were for a business investment. The cheques were both dated April 25, 2017. I checked with Chew and he told me that the payments to the firm were a political donation,” he said.

Lewis & Co is a company linked to Ahmad Zahid, which was stipulated in two of the 47 charges he is facing.

Bernama, meanwhile, reported that Ahmad Zahid had directed the Ministry to use the passport chips supplied by his friend in Datasonic's subsidiary, Datasonic Technologies Sdn Bhd (DTSB), for Malaysian passports.

This was revealed by former secretary of the Ministry's Procurement Division, Datuk Abd Aziz Md Nor, who also testified in court today. Abdul Aziz, 62, said the directive was in the minutes written by Ahmad Zahid in a letter sent to the Ministry.

Abd Aziz also identified the letter with the title “Application to begin supply of passport chips together with in-lay to Percetakan Keselamatan Nasional Sdn Bhd (PKN) during the transition period of the existing contract for six months from June 1 to Nov 30, 2016 for Malaysian international passports”.

Asked by deputy public prosecutor Gan Peng Kun to read out the minutes during examination-in-chief, the witness said: “Datuk Seri KSU (secretary-general), please review the previous decision. Use the chips of this company before studying the contract extension of PKN.”

The trial continues on Wednesday before Justice Collin Lawrence Sequerah.