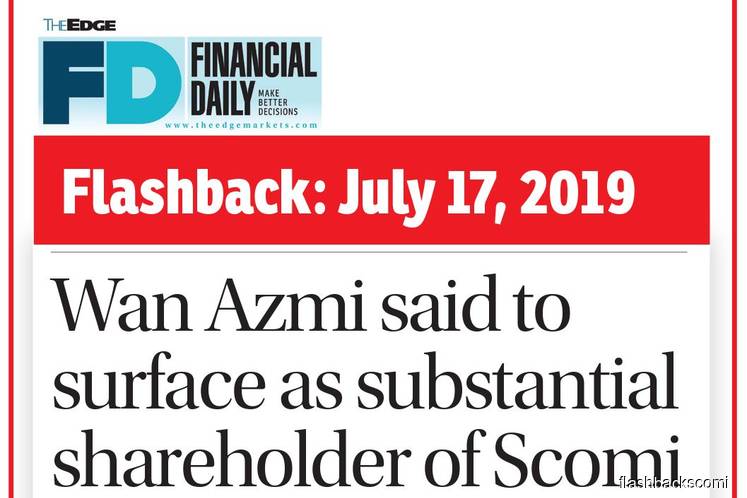 The fresh capital will be injected into Scomi Group by underwriting the proposed rights issue which is fixed at 18 sen per share. Should the cash call be fully subscribed, the two investors will take part in the proposed restricted rights issue, according to the company’s filing with Bursa Malaysia this evening.

In the filing, Scomi Group said Wan Azmi and GGSB have each committed to underwrite RM21 million worth of rights shares each at 18 sen per share, in the event that the exercise is undersubscribed.

The cash call is being priced higher than the market price. Scomi Group shares were last traded at nine sen, giving it a market capitalisation of RM98.45 million.

However, if the rights issue is oversubscribed or less than RM21 million is required from each party for the exercise, then both Wan Azmi and GGSB are entitled to a restricted rights issue of up to 215.1 million new shares that come with 71.7 million detachable warrants on the basis of three restricted issue shares with one free warrant at 19 sen per share.

“Wan Azmi and GGSB will be providing RM21 million each as a loan to Scomi for their commitment to subscribe for both Wan Azmi and GGSB’s entitlement and excess undertaking.

“The proposed restricted issue will only be implemented in the event that there is insufficient excess rights shares to be allocated to Wan Azmi and GGSB pursuant to their excess undertaking,” it said.

Meanwhile, loans of RM21 million each from Wan Azmi and GGSB will be used to offset against the subscription monies payable by the parties for the rights shares and restricted issue, if applicable.

Besides that, the group has provided an update on the proposed RM38 million liabilities settlement with Malayan Banking Bhd (Maybank), and said that it will be paying RM23 million in cash, while the balance RM15 million will be settled via the issuance of shares at 18 sen sen per share under its maximum scenario.

On the other hand, if the group only achieves minimum subscription, Scomi shall be required to pay RM20 million in cash, with the remaining balance of RM3 million to be paid over four quarterly instalments of RM750,000 at an interest rate of BLR plus 2.5% per annum.

Scomi Group had also revised its previously proposed share capital reduction exercise, from the initial reduction from RM224.96 million to RM40 million. Now, the company is looking to reduce its share capital to RM3 million.

This will give rise to total credit of RM221.96 million, which will be credited to its capital reduction reserves, to be used for offsetting future losses of the company or in such manner to be determined by its board of directors, it said.

The credit amount is higher than the RM184.96 million total credit arising from the previous proposal.