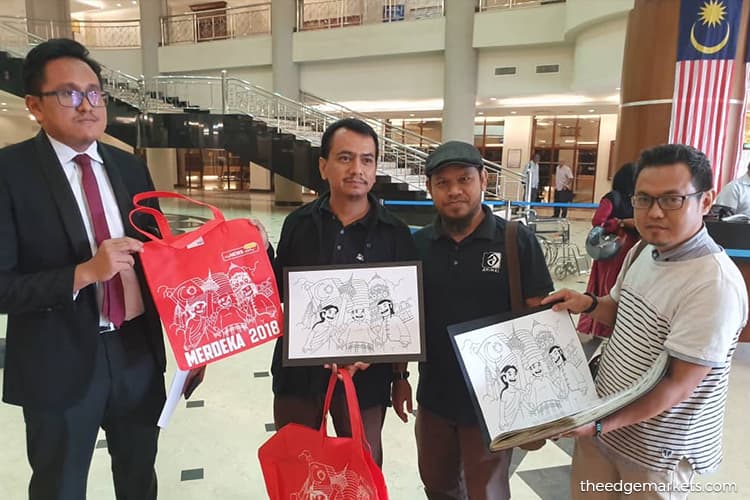 (From right): Amir Hamzah, Azhar and Shamsaimun, with their lawyer Ahmad Hafiz (far left), showing their original copyright artwork and the design used on the bags sold by MyNews. Photo by Hafiz Yatim

KUALA LUMPUR (April 11): Two artists are suing MyNews Holdings Bhd for copyright infringement, claiming that the convenience store chain operator had used their artwork without consent on bags that it sold.

Shamsaimun Ezil and Amir Hamzah Hashim named MyNews and its wholly-owned subsidiary, Eemerge Incorporated Sdn Bhd, as the defendants in the suit filed on April 3.

In their statement of claim, the duo said they run a studio called Homework Studio, and sometime in April 2007, resident artist Azhar Saad produced drawings and artworks using the theme of national unity and national identity.

He produced two drawings within three days for which he received payment from Homework, and when others asked permission to use that artwork the studio was paid some fee in return, said Shamsaimun and Amir Hamzah.

They said the bags contained Azhar's artwork, if viewed from the side, for which they claimed they hold a copyright.

As a result, they made a statutory declaration to assert ownership of the artwork that was published on their blog on Nov 23, 2007.

The duo claimed that the defendants had violated their copyright by copying, selling and advertising the artwork without their written consent or knowledge.

They sent a letter of demand dated Oct 19, 2018 to the defendants, asking them to stop selling the bags with their artwork and claiming damages for losses.

In a letter dated Nov 15, the defendants' lawyers said MyNews had stopped selling the bags but denied that it was responsible for the alleged copyright infringement.

They are seeking an injunction barring the defendants from producing and selling the artwork and bags, a discovery application detailing the production, distribution and sale of the bags, and an inquiry as to the losses suffered by Homework.

Shamsaimun and Amir Hamzah are also claiming compensatory and exemplary damages and costs of the action.

Their lawyer Ahmad Hafiz Zubir told reporters the statement of claim was served on MyNews' solicitors yesterday, and the High Court has fixed April 22 for case management.