KUALA LUMPUR: Parties involved in the shareholder tussle in Protasco Bhd are trying to gain points by airing dirty laundry in public. The company’s executive vice-chairman and group managing director (MD) Datuk Sri Chong Ket Pen is on one side, while non-executive directors Tey Por Yee and Ooi Kock Aun are on the other.

The two factions are suing each other and each wants to remove the other from the board.

Currently, Tey and Ooi, along with their investment vehicle Kingdom Seekers Ventures Sdn Bhd, have a combined 23% equity interest in Protasco, while Chong holds a 21.25% stake. The point of contention is the missing RM10 million cash from Protasco’s oil and gas (O&G) venture in Indonesia.

Tey and Ooi alleged that Chong had made personal gain of RM10 million, an amount that was channelled to RS Maha Niaga Sdn Bhd which is controlled and run by Protasco’s senior management. However, Chong told the media yesterday that he had lent RM20 million to Tey for the latter to acquire a substantial stake in Protasco.

He said the RM10 million channelled to Maha Niaga was to repay the bank loans that Chong had taken earlier to lend to Tey.

Chong said he sourced the remaining RM10 million of the sum lent to Tey from a margin financing from JF Apex Securities Bhd by pledging his five million Protasco shares.

“We have the loan agreement to prove it,” said Chong.

When asked why he lent the money to Tey, Chong replied: “At that time, I viewed him to be a strategic investor who would be beneficial to the company, and I agreed to help him organise the loan for RM20 million.”

Chong said Tey has yet to settle the outstanding sum owed to JF Apex.

Chong is confident of garnering enough support to remove Tey and Ooi from the board in the coming extraordinary general meeting (EGM) on Nov 26. Two days later, there is another EGM, this time called by Tey, to remove Chong as the company’s MD. 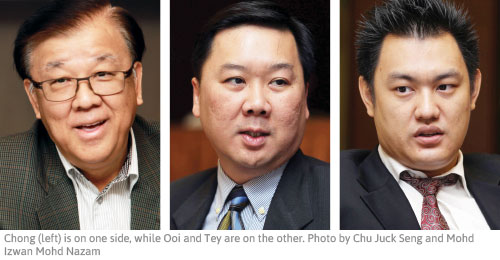 Chong said the entire investment in Indonesia — involving the acquisition of a 63% stake in PT Anglo Slavic Utama’s (PT ASU) subsidiary, PT Anglo Slavic Indonesia (PT ASI), which is involved in upstream O&G exploration and production activities for US$22 million — was orchestrated by Tey.

On the other hand, Ooi admitted that he and Tey recommended the acquisition of PT ASU.

Ooi told The Edge Financial Daily that the duo’s investment vehicle, Kingdom Seekers Ventures, entered into a shareholder agreement with Chong in November 2012 to buy a 27.11% stake in the company at a premium to the market price.

“We have been asked to pay an extra one-third higher premium for the [Protasco] shares we acquired at that time,” said Ooi, adding that the premium paid for Protasco was on the expectation the investments would yield lucrative returns from the O&G venture.

A supplementary agreement was drawn up later whereby PT ASI would get a 10-year extension on the production management partnership agreement from PT Pertamina Persero. However, PT ASU later secured an extension for only three years instead of 10. The deal was terminated in July because the 10-year extension was not granted.

“PT ASU submitted several proposals to Protasco to resolve the matter but the board repeatedly turned down their suggestions,” Ooi said.

The lapse of the O&G deal has scuttled Protasco’s venture into the industry, which was then a booming sector — for which Ooi and Tey paid a premium.

He said the three companies are not subsidiaries of PT ASU, but they are related to PT ASU by virtue of management’s acquaintances.

According to Nexgram Holdings Bhd’s annual report 2012, Fast Global Investment Ltd has a 5.18% stake, while Telecity Investments and PT Nusantara hold 16.69% and a 6.65% warrant holding in the company. Tey is Nexgram’s chief executive officer and MD.

Fast Global Investment has re-emerged as a minority shareholder in Nexgram with a 1.518% stake as shown in Nexgram’s 2014 Annual Report. In addition, Ooi said the negotiations to buy into PT ASU were led by Chong’s son, Kenny Chong.

Ooi noted that he was only a non-independent non-executive director of Protasco; he was not involved in the decision-making.

This article first appeared in The Edge Financial Daily, on November 11, 2014.