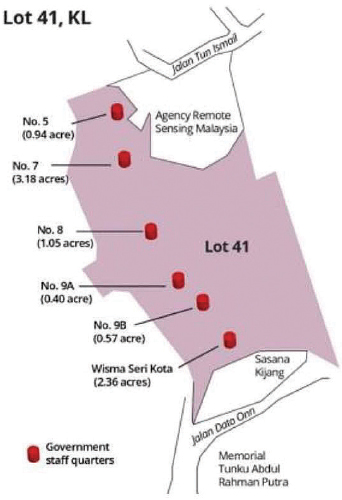 Lot 41, the tract that is at the centre of the controversial Bank Negara land deal

EXACTLY a year ago this week, Bank Negara Malaysia announced that it had purchased 55.79 acres of land in Kuala Lumpur for RM2.066 billion from the federal government.

The central bank’s decision to buy land of that size and price shocked many, and 12 months on, the deal remains a puzzle.

At the time, Bank Negara maintained that the land — located contiguous to its Sasana Kijang complex and near the Asia School of Business as well as the Financial Industry Training Centre that was under construction — was for the development of a financial education hub.

There were also plans to relocate The Global University of Islamic Finance and the International Shari’ah Research Academy for Islamic Finance to the land known as Lot 41, Bank Negara said.

Equivalent to 37 football fields, the tract would also be used for the future development of education and training facilities focused on enhancing the technical capabilities of talents in the financial services sector.

The RM850 psf paid for the 2,430,212 sq ft tract, coupled with the timing of the purchase, combine to make it arguably the most controversial property deal of the year.

Even though the tract was bought at close to the prevailing market price for commercial land in the vicinity, property experts questioned the enormous amount spent when the central bank could have leased a piece of land for a nominal sum instead.

Alternatively, it could have bought a tract outside Kuala Lumpur, for instance in Putrajaya where land is available for RM200 psf, or even in Cyberjaya for the same price but with the infrastructure already in place.

In defending the purchase, Bank Negara insisted that an independent valuation had been undertaken by a firm agreed to by both the vendor and the purchaser.

But as the land is not intended for commercial profit, why pay such a high price, property valuers asked.

Questions were also raised as to why Bank Negara was acting like a real estate developer, buying such a large piece of land for a huge sum of money, and then taking its time to put it to use.

The then Bank Negara governor Tan Sri Muhammad Ibrahim justified the purchase as transacted at arm’s length. He also stressed that it was not the then Barisan Nasional government that wanted to dispose of the tract but rather the central bank wanting to purchase it.

This begs the question as to whether the central bank really wanted or needed such a large tract or if a smaller parcel would have sufficed.

A search at the Federal Territories Kuala Lumpur Lands and Mines Office revealed the title status of Lot 41 as freehold, and that it was originally registered to the Federal Lands Commissioner (FLC). However, on Dec 14, 2017, the land title was transferred to Hartanah Mampan Sdn Bhd, which effected a transfer to Bank Negara 15 days later on Dec 29.

Hartanah Mampan is wholly owned by Actius Terra Global Holdings Sdn Bhd, which in turn is 100% held by the Minister of Finance Inc. These searches have raised further questions.

Why were so many layers created when in the past direct land transfers from the FLC to the company purchasing the asset was the norm?

Also, did the early retirement of deputy governor Dr Sukudhew (Sukhdave) Singh have anything to do with this acquisition? Was the Jan 4 land purchase announcement timed to appear after Sukhdave’s last day at the central bank on Dec 31, 2017?

Another observation is the timing of the deal as it coincided with an obligation by 1MDB that was then due to Abu Dhabi state fund International Petroleum Investment Co. Minister of Finance Lim Guan Eng has since confirmed that the payments included proceeds from Bank Negara.

On the issue of the sale proceeds being used to settle 1MDB’s debts, Muhammad pointed out that the central bank did not have control over how the proceeds would be used. He subsequently resigned in June “in the interest of protecting Bank Negara’s reputation”.

The central bank had also pointed out that the price was subject to a final survey of the area involved, which means it could be higher or lower.

Why not wait for the final survey to be completed? Why the rush to complete the deal?

A few months ago, the central bank said an independent party was commissioned in August to review the land purchase and that in order to facilitate the review, relevant officers of Bank Negara had opted to take leave of absence. The Malaysian Anti-Corruption Commission has also questioned Muhammad on the acquisition, reportedly on whether the purchase was in accordance with property procedures.

Come 2019, Malaysians will be hoping for greater clarity on the issue, although it is possible that even more questions will be raised.

Will the independent valuation report be made public? Will other property valuers be asked to conduct another valuation? Should or will any Bank Negara officer be held accountable if the deal is found to be flawed?

Or has a mountain been made out of a molehill?