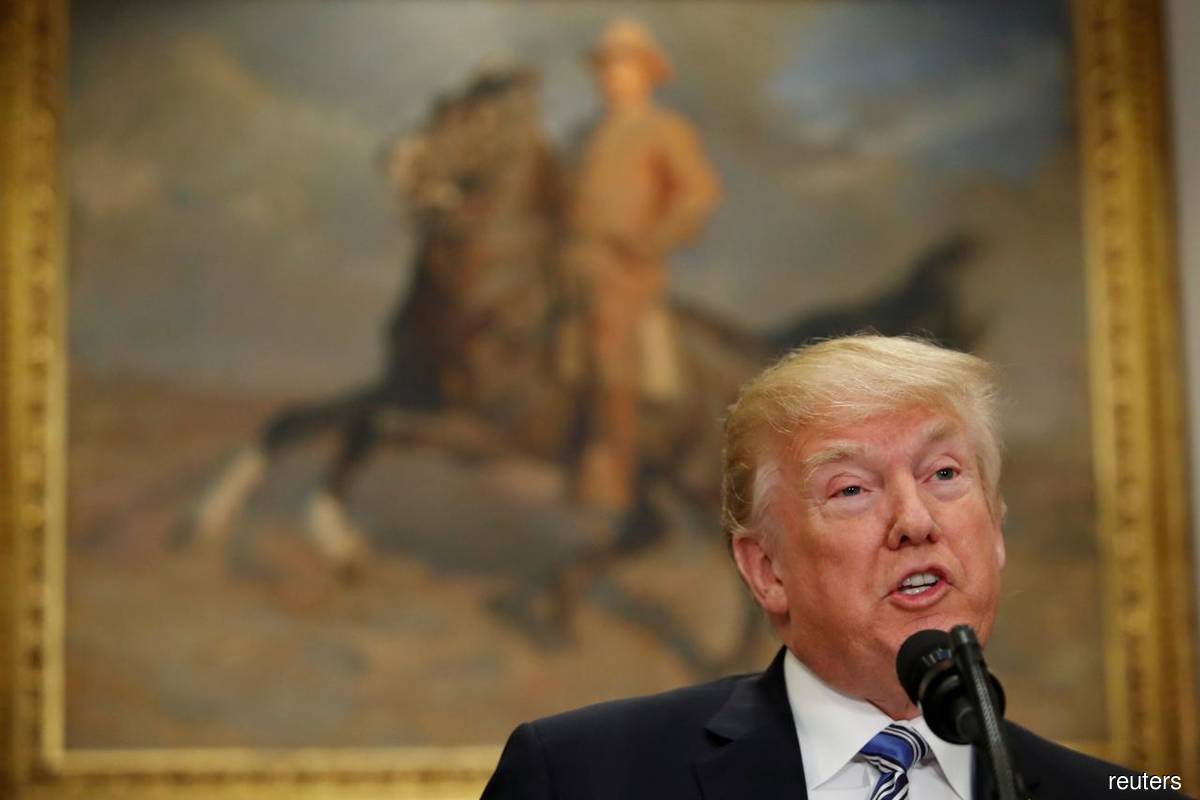 WASHINGTON (Oct 7): US President Donald Trump, still being treated for COVID-19, ended talks on Tuesday with Democrats on an economic aid package for his pandemic-hit country and drew rebukes from Facebook and Twitter for spreading misinformation about the coronavirus.

His tweet breaking off talks for a new round of stimulus spooked Wall Street, sending stocks down as much as 2% from their session highs, a serious hit at one of the metrics that the Republican president has held up as a sign of success.

Trump's move drew criticism from Democratic presidential opponent Joe Biden, congressional Democrats and some Republicans, who said more was needed to help the millions who have lost their jobs in a health crisis in which the United States leads the world in deaths and infections.

"The president turned his back on you," Biden said in a Twitter post on Trump's decision. After days of conflicting messages from doctors and aides about his condition, Trump, 74, returned to the White House on Monday after three nights at a hospital. His doctor said on Tuesday that Trump reported no COVID-19 symptoms and was doing "extremely well." But the disease continues to spread among Trump's top aides, with White House senior policy adviser Stephen Miller saying he tested positive on Tuesday.

The top U.S. military leaders are also isolating after the Coast Guard's No. 2 tested positive for the coronavirus, Pentagon officials said. Officials said Trump was working from makeshift office space in the residence rather than the Oval Office, with few senior staff given face-to-face access exactly four weeks before the Nov. 3 U.S. election in which the Republican is seeking re-election.

In his first major policy pronouncement since returning to the White House, Trump abruptly called off negotiations with Democratic lawmakers on coronavirus relief legislation until after the election, even as cases of the virus are on the rise across much of the country.

"I have instructed my representatives to stop negotiating until after the election when, immediately after I win, we will pass a major Stimulus Bill that focuses on hardworking Americans and Small Business," Trump wrote on Twitter. Despite Trump's bravado, support for Biden has grown by about 4 percentage points since mid-September, according to

Reuters/Ipsos polling from Friday to Tuesday, with 52% of likely voters backing Biden versus 40% for Trump. Speaking at Gettysburg, Pennsylvania, site of one of the U.S. Civil War's bloodiest battles, Biden said the country was experiencing "total unrelenting partisan warfare" and, without naming Trump, faulted his handling of the coronavirus.

"Wearing a mask isn’t a political statement. It’s a scientific recommendation," he said, alluding to Trump's refusal to wear a mask for safety even after falling ill. On his return to the White House, Trump removed his mask to pose for pictures.

"Today, once again, President Trump showed his true colors: putting himself first at the expense of the country," Democratic House of Representatives Speaker Nancy Pelosi said, adding: "The White House is in complete disarray." Republican Senator Susan Collins, in a tight re-election battle in Maine, called Trump's decision to end the talks a "huge mistake."

But Senate Majority Leader Mitch McConnell, a Republican, said he agreed with Trump's decision, telling reporters that "his view was that they were not going to produce a result and we need to concentrate on what’s achievable." Democrats' chances of capturing a Senate majority inched higher in recent days as three nonpartisan U.S. elections analysts added Lindsey Graham's South Carolina seat to the list of what are now 10 Senate seats in play, which includes eight potentially vulnerable Republicans and two vulnerable Democrats.

Republicans hold a 53-47 majority in that chamber. McConnell plans to focus on pushing through the confirmation of Trump's third Supreme Court nominee, Amy Coney Barrett, which would cement a 6-3 conservative majority. That nomination gave Trump and his fellow Republicans an opportunity to turn the focus of the presidential campaign away from the coronavirus, prior to Trump's illness.

Trump tested positive for the coronavirus on Friday after months of playing down the deadly infection, and he stood by that message on Tuesday. "Many people every year, sometimes over 100,000, and despite the Vaccine, die from the Flu. Are we going to close down our Country? No, we have learned to live with it, just like we are learning to live with Covid, in most populations far less lethal!!!" Trump wrote on Twitter and Facebook.

Twitter Inc responded by putting a warning label on the post, saying it included potentially misleading information. Facebook Inc removed the Trump post for breaking its rules on COVID-19 misinformation, according to CNN. Anthony Fauci, the nation's top infectious disease expert, said the threat from COVID-19 was "very, very much different" from influenza's reach. The United States has the world's highest death toll from the pandemic, with more than 210,000 deaths.

By comparison, influenza typically kills between 22,000 and 64,000 people a year in the United States, U.S. government statistics show. Trump had no public events listed for Tuesday and it was unclear when he would resume a full schedule of presidential duties and campaigning ahead of Election Day. He has not been seen in public since Monday night but tweeted that he was looking forward to a scheduled second debate with Biden on Oct. 15 in Miami.