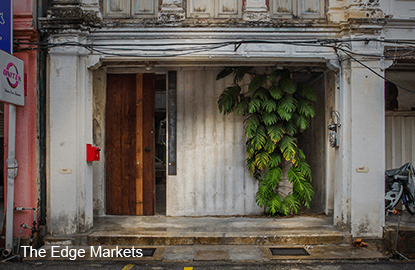 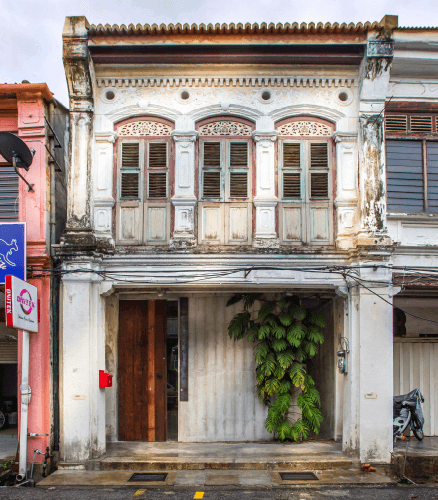 Sinkeh, a tranquil guesthouse in George Town, is a striking study of the old married to the new

SINKEH, a guesthouse in Lebuh Melayu in George Town, Penang, does not stand out in the conventional sense — there’s no ornately carved door, intricate embellishments or a vibrant paint job. But once you find it, you realise it is something truly special.

The top part of this 19th century shophouse’s façade retains the historical Straits Chinese architecture with its original shutters, weathered and time-worn. This, however, is in stark contrast to the bottom part, where the entrance is located, that is dominated by a raw concrete wall anchored on both sides by glass panels. Rather unexpectedly, on the bare cement wall is an old creeper with large palm-like leaves that has the desired effect of softening the otherwise sombre, imposing appearance. A towering door made from recycled timber with an antique knocker serves as the entrance while an oxidised metal plank with “Sinkeh” carved out in block letters on it tells us we are indeed at the right place.

A curious feature to the left of the entrance invites closer inspection and what we find surprises and delights us — it is a long, narrow pool, dotted with lotus leaves and filled with goldfish, that stretches down almost half the length of the 33m-long shophouse. From the outside, we get a glimpse of the space within, but not too much.

Sinkeh — which means “newcomer” in Hokkien and was used in the 19th and early 20th centuries to refer to the Chinese migrant community — is owned by theatre practitioner and arts advocate Chee Sek Thim, a Penang native who moved back in 2008 following many years of living and working in Kuala Lumpur. He conceptualised it as “a space that could function both as an arts space and something that could provide a sustainable source of income”. 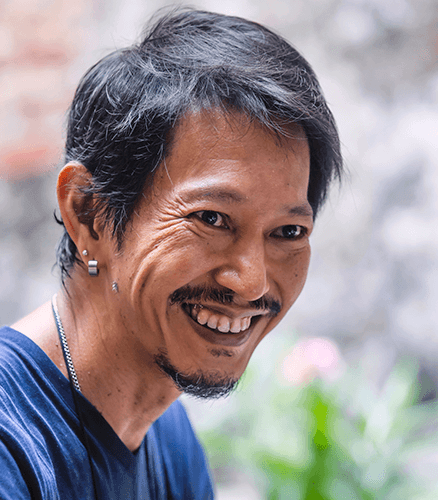 Chee elaborates, “I thought, since I was in Penang, I should tap the economic strength of the island, which is essentially tourism. I wasn’t about to start a café; I wanted something a little quieter, a bit more suited to my nature that can allow a more relaxed flow of people. So, I decided this was how I was going to do it.”

When George Town was announced a Unesco World Heritage Site, many of the traditional shophouses were put up for sale. How Chee came to purchase No 105 on Malay Street in 2009 has much to do with the architect involved in the project — Lillian Tay of Veritas Design Group.

“It so happened that three houses on this road were up for sale,” he begins. “Lillian, who is an old friend, was in town for the weekend and I invited her to go house-hunting with me. So, we walked down this road and she saw this and said, ‘Get this one.’ It’s very unusual [for an intermediate unit] to have a gap or fire break between the houses. But I said, ‘You don’t even know if this piece of land belongs to me and whether or not you can open it up. She said, ‘It doesn’t matter; you can at least have a few windows to let more light in.’” 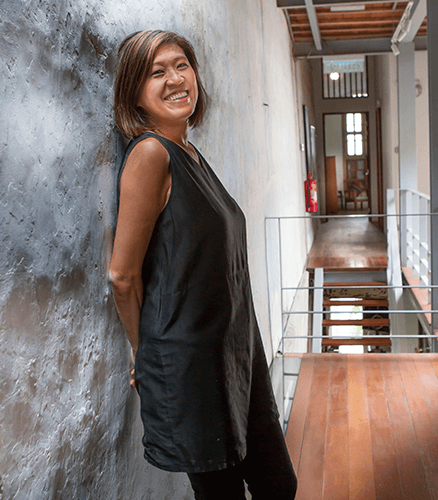 Says Tay, “I saw it from the front. We couldn’t come in when it was put up for auction, so when we came to peek in, I noticed there was a gap between the two shophouses, so the building was not abutting on the next. I saw an opportunity there to do something interesting.”

Furthermore, the gap was tapered in its dimensions, starting with one foot wide to almost six feet at the rear. As it turned out, the gap did belong to the unit; its past owners had covered it up and sealed the space with make-shift structures. What Tay did was to open it up for light to stream in and incorporate the aforementioned fish pond.

“The reflective pool is to emphasise the outdoor space. It gives you a sense of a garden and of the outdoors, which is unusual,” she says.

Aesthetically, Sinkeh presents a striking study of the old and the new. The façade hints at this while inside, tradition and modernity exist together in a most compelling manner. The shophouse has an open courtyard that effectively divides the heritage portion of the building at the fore from the newly constructed steel and concrete section at the rear.

The tall timber doors open into the lobby, which sees a continuation of the raw concrete look of the frontage with untouched-up walls and cement floors and a counter of exposed bricks and wood. Vintage furnishings include wooden Chinese armchairs, a cabinet of curiosities and a round marble table with stools that had belonged to Chee’s grandfather. Paintings and other artwork cover portions of the walls, such as the bold, graffiti-like piece by Tey Beng Tze behind the counter.

The lobby leads into an open-air courtyard, inhabited by an eclectic mix of potted plants tended to by Chee, who is quite the avid gardener. This charming spot is where guests have breakfast on a long wooden table, except when it rains. Beyond the courtyard, separated by an expansive altar table, is the arts space where Chee runs a mentoring programme with young theatre-makers who lead and create productions that are then staged and are open to the public. He finds a lack of such initiators in George Town and is seeking to “create a situation where it’s a bit more sustainable for the future of the arts”. The platform he provides creates an environment as close as possible to the real theatre world.

Sporting pillars of steel and slabs of bare concrete, the arts space is a completely rebuilt structure that is apart from the shared party wall, thus disengaging it from the buildings next to it, Tay explains. “I didn’t want to undermine the foundation of the old wall on each side. Since we were doing a new construction, I wanted the columns and the structure to not be reliant on the damp and crumbly walls. 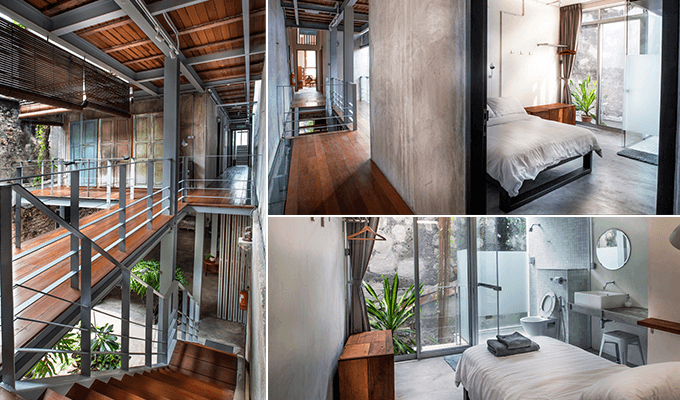 “We made it in steel so that the foundation would be lighter and also to express the new. We consciously wanted to do something new and industrial, definitely not reproducing and mimicking the old historical style. I think there’s a lot of that and there’s nothing wrong with that. But I think there’s room for different expressions of how to deal with the old.

“In fact, in Malaysia, we are too conservative. I think we should always look for creative opportunities when we are doing conservation work, not always just reproduce the past.”

The architect continues, “We didn’t set out to do a conservation job but an arts space that engaged the past without being dictated by it. It is also to show that it’s not the only way to do this, to reproduce the old. We kept the façade as it was still intact … But all the nice finishes on the inside, like the timber screens, were already gone. It was quite altered because it had been used as a warehouse … So, we tore down the back and rebuilt it.”

Tay also added two floors for more guest rooms (there are nine in total) and a rooftop terrace that offers sweeping views of the city. The “floating” walkways on the first and second floors are “meant to evoke the timber decks of the jetty”, she says. Another indication of the new section’s independence from its neighbour are the holes along the walls of the corridor on the second floor where the trusses for the original roof used to fit. These have not been patched up but kept as a vestige of what was once there.

The rooms, though minimally furnished, are comfortable and they sport balconies and glass bathrooms that allow daylight to illuminate the rooms. The beds are satisfyingly firm, the pillows soft and plump, ensuring a good night’s rest. There is a library on the first floor should you want to stay indoors and do a bit of reading, and there’s also a covered deck for lounging on the second floor. Privacy is ensured as only guests are permitted upstairs and “quiet hours” are observed between 11pm and 7am, during which guests are required to speak and tread softly.

Sinkeh has a casual, homely atmosphere and you quickly fall under its many charms, including the wonderfully affable staff and resident dog, Luna, who never leaves Chee’s side. A tranquil haven for weary souls, Sinkeh is a true gem that celebrates Penang’s heritage and engages with the present in a meaningful way. 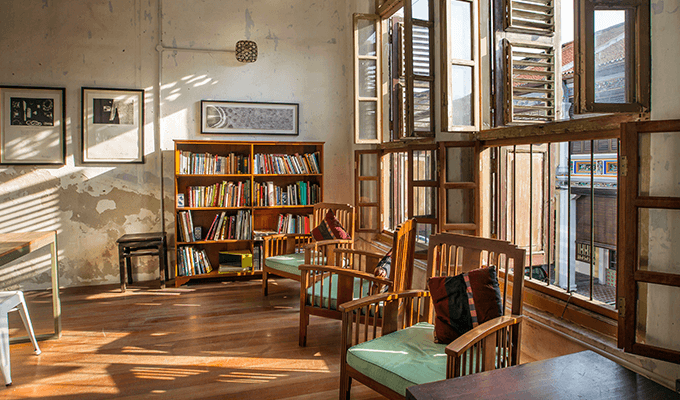