CLIQ Energy Bhd, Sona Petroleum Bhd and Reach Energy Bhd, the three undergraduate oil and gas special purpose acquisition companies (SPACs) that are currently trading at a discount to their intrinsic cash value, provide a unique opportunity for investors to lock in potential returns of 17% to 29%, even if the companies fail to secure a qualifying acquisition (QA) before the maturity date.

SPACs, or blank cheque companies, are given three years to acquire business assets in a targeted industry, after raising the money from an initial public offering (IPO).

Four SPACs have thus far been listed on Bursa Malaysia, with Hibiscus Petroleum Bhd being the first to go public in July 2011, followed by CLIQ Energy and Sona Petroleum in 2013, and Reach Energy in August this year.

Nothing much is happening in Reach Energy, which was only listed about four months ago.

According to Securities Commission Malaysia’s equity guidelines, at least 90% of a SPAC’s IPO proceeds must be placed in a cash trust account. Reach Energy has the highest at 94.75%.

Theoretically, the cash trust account will serve as the base value of the SPAC as investors can choose to vote against a QA and opt for the repayment of cash value from the trust account plus net interest earned.

It is worth noting that the trust balance will only be distributed to the shareholders, excluding management and early investors.

CLIQ Energy, which was listed in April last year, is now trading at discounts of 17% and 15% to its listing price and net trust per share, respectively. In other words, it has an upside potential of 17% with 15 months to go, which will translate into a potential return of 13.1% per annum.

Meanwhile, Sona Petroleum and Reach Energy have an upside potential of 21% and 29% respectively, if investors buy in now and wait for the liquidated distribution.

Credit Suisse Group AG had, in October, emerged as a substantial shareholder of CLIQ Energy with a 5.024% stake, which was then raised to 7.117%.

It is believed that Credit Suisse was only acting on behalf of its client in the share purchase, but speculation is rife that the Swiss-based financial services institution is looking beyond the potential QA, as it is also aiming to lock in the 17% return.

Inter-Pacific Research Sdn Bhd head of research Pong Teng Siew tells The Edge that “it is worthwhile to speculate” in the oil and gas SPACs in a declining oil price environment, especially when these counters are trading at a discount.

“I wouldn’t say there is no potential risk at all to invest in SPACs, but the downside is limited and well protected. In a worst case scenario, you can still get back at least 90% of the listing price, which will give you a potential return of about 10%,” he says.

Pong acknowledges that SPACs are speculative in nature, as they offer a chance to speculate on the odds of success in QA. If successful, investors may gain exposure to the oil and gas sector at a cheaper entry cost.

“The oil and gas assets have not been cheap, until recently. Therefore, if these SPACs found something, the upside potential could be very high,” he adds.

Areca Capital Sdn Bhd CEO Danny Wong Teck Meng says it is always a good idea to buy SPAC shares at a discount to their listing price, as they promise a certain amount of cash refund within a stipulated time frame.

“SPACs could be a safe bet for some investors, considering the amount of cash that must be returned to the investors in the event these companies are unable to complete their QA,” he says.

Wong, however, notes that the drop in oil prices should present opportunities for the oil and gas SPACs to undertake merger and acquisition activities.

“Cash-rich companies like SPACs stand a better chance to acquire oilfield assets now, compared with three to six months ago. They have to be patient enough to wait for the oil prices to decline to a level where capital-intensive companies may not survive,” he adds.

In a Dec 10 report, Hong Leong Investment Bank Research (HLIB Research) says in the case of liquidation, holding the shares of CLIQ Energy, Sona Petroleum and Reach Energy to maturity would provide an attractive return of 17%, 21% and 29% respectively (see charts).

The potential return takes into account  interest of  3.2% earned per annum as well as a 10% tax on interest and other expenses.

According to HLIB Research analyst Jason Tan Yat Teng, this translates into a risk-free return of 11% to 13% per annum, which is significantly higher than the average annual fixed deposit rate of 3.2%.

He also notes that the safety margin for SPACs is widening, considering CLIQ Energy, Sona Petroleum and Reach Energy are trading at a discount of about 13% to 16% to gross trust per share. Hence, buying into these SPACs now will provide a base potential return of 15% to 19%.

Tan opines that the widening gap between share price and intrinsic cash value is due to the plunge in oil prices and high participation from retail investors with limited institutional shareholders.

He says there is a lack of instant arbitrage opportunity in SPACs, given that their value can only be realised upon successful acquisition of QA or approaching the end of the three-year time frame.

“Successful completion of QA could provide better upside. Based on the intrinsic cash value, we believe the market has mispriced the security due to misunderstanding of the SPAC structure,” Tan says.

For instance, Hibiscus Petroleum, which traded at a low of 52 sen, is now trading at 98 sen after the successful completion of its QA.

“This underpinned our belief that intrinsic cash value will serve as a base return with upside option from value-accretive qualifying assets,” he says. 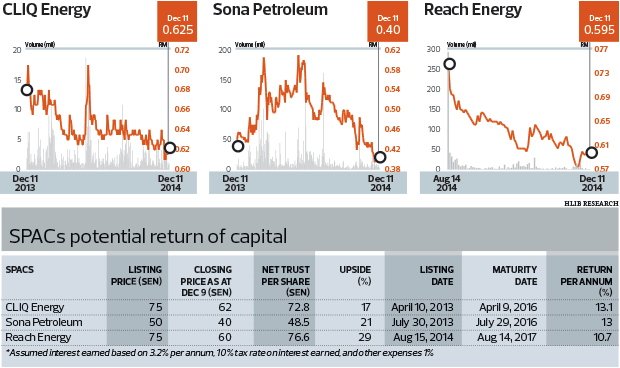