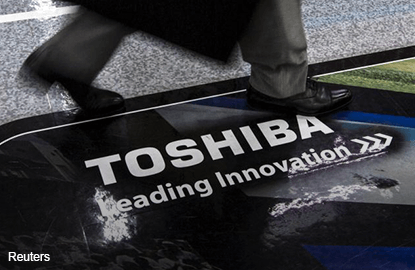 (Feb 14): Toshiba Corp says it expects to book a ¥712.5 billion writedown in its nuclear power business, citing cost overruns at a US unit and diminishing prospects for its atomic-energy operations. Shigenori Shiga will step down as chairman of the conglomerate.

The charge will result in a provisional ¥500 billion loss for the nine months through Dec 31, the company said in a statement Tuesday. In December, Toshiba had warned the writedown could reach several billion dollars, triggering a share decline that has erased more than US$7 billion in market value. As a result of the losses, shareholder equity will drop to negative ¥150 billion for the current year ending in March, Toshiba forecast.

The earnings results came after a chaotic afternoon, which began when the company missed its own deadline for announcing earnings. That raised questions over whether the Japanese company has control over its finances, and the shares fell to near 38-week lows.

Toshiba is now under pressure to come up with a plan for shoring up its balance sheet, which was already under strain from a profit-padding scandal in 2015 that led to restructuring, record losses and asset sales. Toshiba has put up for sale a significant stake in its flash memory operations and is considering other ways of raising cash.

“The questions surrounding Toshiba are so numerous, where do you even begin,” said Masahiko Ishino, an analyst at Tokai Tokyo Securities. “Investors want to know what will happen to nuclear and chip businesses, whether elevator operations and some of Toshiba’s listed subsidiaries will be sold off. There is also the question of why the nuclear writedown happened in the first place.”

In a sign of how bad things are, Toshiba said it is considering selling a majority stake in its memory chip business. The company has previously planned to limit the sale to 20% to maintain control. Toshiba has said it will separate the chip unit by the end of March and hold a shareholders’ meeting that month. Strategic investors and foreign private equity funds are among the potential bidders, according to people with knowledge of the matter.

NAND flash memory, used in smartphones and solid state disk drives, is one of the few bright spots in Toshiba’s sprawling portfolio, which also includes personal computers, TVs, railway systems and elevators. Memory chips generated ¥50.1 billion in profit in fiscal first half, accounting for more than half of total operating income profit in the period. The company didn’t disclose earnings for the division in the most recent quarter.

Toshiba’s US$5.4 billion acquisition of Westinghouse in 2006 was a bet on the future of nuclear power and a way to balance volatility of chip operations with steady long-term revenues. The vision has soured after the 2011 Fukushima meltdown damped demand and the company’s next-generation AP1000 modular reactor technology proved difficult to implement.

For the full fiscal year ending March 31, Toshiba forecast a net loss of ¥390 billion, reversing its November outlook for a ¥145 billion profit. That compares with a projected loss of ¥262.7 billion, the average of analysts’ projections compiled by Bloomberg.