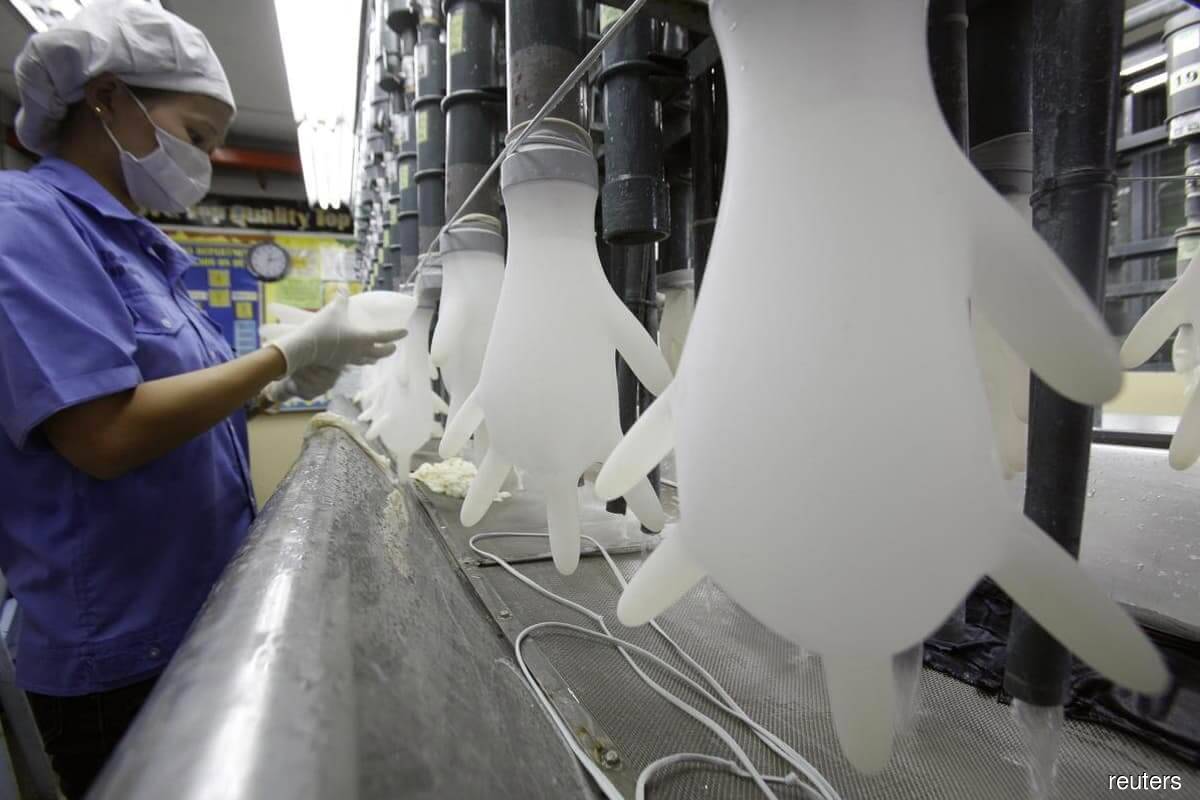 KUALA LUMPUR (June 2): Top Glove Corp Bhd and Hartalega Holdings Bhd's share prices had on Thursday (June 2) slumped to pre-Covid-19 levels at below RM1.30 and RM4 respectively after analysts said the latest-reported quarterly profits of Malaysian rubber glove manufacturers under their coverage were below expectations following exponential demand growth due to the Covid-19 pandemic which began around March 2020.

Top Glove, which was also Bursa's seventh-largest decliner, had fallen as much as 12 sen or 8.76% to RM1.25 earlier on Thursday. At Top Glove's closing share price of RM1.26 on Thursday, the company has a market capitalisation of about RM10.09 billion based on Top Glove's 8.01 billion outstanding shares.

Hartalega's finishing share price at RM3.95 values the company at around RM13.51 billion based on Hartalega's 3.42 billion outstanding shares.

Top Glove's share price has been adjusted for its two-for-one bonus share issue under which about 5.4 billion new shares were listed and quoted on Bursa and the Singapore Exchange on Sept 7, 2020, according to the company's Bursa filing on that day.

Hartalega's share price has been adjusted for its one-for-one bonus share issue under which 1.66 billion shares were listed and quoted on Bursa on March 28, 2018, according to Hartalega's bourse filing then.

On Thursday, MIDF Amanah Investment Bank Bhd's strategy team wrote in a note that the respective latest-reported financial performances of glove companies under the research house's coverage were below its expectations.

"The lacklustre performance was due to the industry coming off a period of exponential growth on the back of the Covid-19 pandemic (which began around March 2020).

"The ASP (average selling price) for gloves has been declining and demand is also on a downturn as we are now entering the endemic phase. The influx of new players results in higher supply, thus creating more downward pressure on the ASP.

"The buying activities have moderated in tandem with the reduction in consumption levels as large buyers, such as governments and large hospital chains are full or near full in terms of PPE (personal protective equipment) supplies," MIDF's strategy team said.

"The drop in ASP was mainly due [to] demand-supply imbalances with more supply entering the market while demand is moderating. ASPs are likely to bottom in 2HCY22 as industry players adjust for inflationary pressures. We think companies are unlikely to be able to fully pass on the cost to buyers however due to the intense competition.

"On a slightly encouraging note, the re-opening of Malaysia’s borders should help to relieve labour shortage issues, although supply chain disruptions are still likely to persist.

Top Glove and Hartalega, which are constituents of the Bursa Health Care index, are also members of the 30-stock FBM KLCI.

Trading dynamics of KLCI constituents on Thursday came ahead of FTSE Russell's announcement on its June 2022 KLCI semi-annual review, the results of which are scheduled to be revealed in early June 2022.

During FTSE Russell's previous December 2021 KLCI semi-annual review, Inari Amertron Bhd was added to the KLCI and as a result, Hap Seng Consolidated Bhd was removed from the index, according to FTSE Russell's statement on Dec 2, 2021.