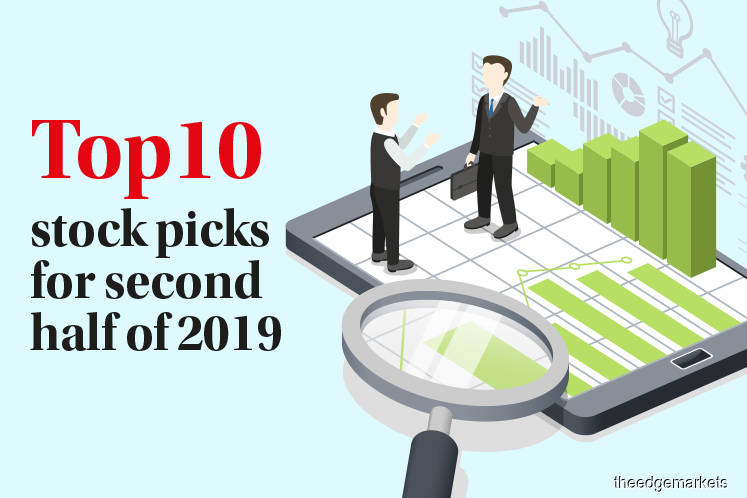 AFTER the first half (1H) of the year where volatility dominated, with trading sentiment often turning 180 degrees in a matter of seconds due to nothing more than just a Twitter post, investors may be looking anxiously at what stocks to bet on now. Below are 10 stocks that are among fund managers’ and analysts’ top picks as the second half of the year unfolds, which The Edge Financial Daily has culled from conversations with them, as well as from research notes. The stocks are ranked by their upside potentials based on the consensus or median target price (TP) of the stock.

Last Friday, CIMB Research analyst Walter Aw told investors that glovemaker Supermax is now trading at a 47% discount when compared with its peers in the same sector, based on its 14 times forward price-to-earnings ratio (PER) versus the local sector’s average forward PER of 26.3 times.

In a July 12 note, Aw also noted the group has been trading at an average 28% discount to the Malaysian glove sector’s average in the past five years. The large discount is mostly due to uncertainties over its expansion plans (water supply issues that led to a delay in the commissioning of two new glove plants in 2015-17), regulatory risks, and weak earnings delivery track record.

“Moving forward, we believe Supermax’s P/E valuations would catch up with its local peers, given improving clarity on its expansion plans and expectations of stronger earnings delivery. Hence, we view Supermax as a laggard play to the sector and find its P/E valuation attractive at this juncture,” Aw said. He has placed the stock on “add” and raised the target price (TP) for it to RM2.30.

Supermax closed two sen higher at RM1.63 last Friday. Eight of nine research houses covering the stock have it on “buy”, with a median TP of RM2, indicating a potential 22.7% upside.

All 14 analysts listed on Bloomberg covering Bermaz Auto Bhd (BAuto), the official distributor of Mazda cars in Malaysia, placed it on “buy”, with a consensus TP of RM3.04, which means a potential 17.8% upside from its closing price of RM2.58 last Friday.

In a July 4 note, Kenanga Research said BAuto is its preferred pick for its superior margins (its average profit margin of around 10% versus its peers of around 4%), steady dividend yield at 8%, and upcoming new models for the local volume.

“Elsewhere, in the Philippines, the TRAIN (Tax Reform for Acceleration and Inclusion) law is affecting demand for motor vehicles, but BAuto plans to preserve its sales volume by increasing its Philippines dealerships and introducing the all-new Mazda CX-8 which they expect to attract huge demand over there,” it said. It has maintained its “outperform” call on BAuto, with a TP of RM3.

When contacted, MIDF head of research Mohd Redza Abdul Rahman views UEM Edgenta as a good defensive play, describing it as “one strong player in healthcare services and highway maintenance”.

“We remain optimistic on UEM Edgenta’s growth prospects going forward, as it has proven time and again its capability in delivering facilities support services, especially in the healthcare segment.

“It is great to see that the company has made inroads into Singapore’s healthcare services sector with the recent contract win.

“We are also positive on the fact that it continues to leverage on its robust network of technology infrastructure, coupled with its proven record of providing expert facilities management services in highway maintenance and the property management,” he said.

UEM Edgenta climbed one sen to settle at RM2.90 last Friday. All three research houses that cover the stock have it on “buy”, with a median TP of RM3.40, which is 17.2% higher than its closing price.

The semiconductor manufacturer is a favourite of two analysts who cover the stock, who have placed it on “buy” with a median TP of RM1.76, indicating a 14.3% upside potential, as the stock closed at RM1.54 last Friday for a market capitalisation of RM1.61 billion.

In a July 1 technology sector update, Hong Leong Investment Bank (HLIB) said the decision by US President Donald Trump to lift the ban on Chinese telecommunications giant Huawei Technologies Co Ltd was a “a silver lining in these dull outlooks for global semiconductor sales and capital spending”.

“We expect Frontken to experience multi-year growth ahead on the back of sustainable global semiconductor market outlook; robust fabulous investment; leading edge technology; oil and gas recovery; and strong balance sheet,” said the research house, which kept a “neutral” stance on the overall technology sector.

Apart from Supermax, Kossan is another top pick of CIMB’s Aw in the glove sector.

Although price competition is likely to weigh on Kossan’s earnings in the second quarter of this year (2QFY19), Aw expects the group’s performance to improve as it steps into 3QFY19, as pricing competition eases and supply-demand dynamics improve. As such, he kept an “add” call on Kossan, with a higher TP of RM5.07, “to account for a more favourable operating environment for glove makers and stronger earnings delivery ahead.” He also expects Kossan, which is planning to raise production capacity from 26.5 billion gloves per annum to 44 billion by 2021, to enjoy higher profit margins with better operating efficiency via increased automation and better product mix.

Kossan closed two sen higher at RM4.00 last Friday. There are 17 research houses covering the stock, 14 of them placing it on “buy”. The consensus TP for Kossan is RM4.53, denoting a potential 13.25% upside.

When contacted, HLIB analyst Sean Lim Ooi Leong said Dialog will continue to be one of the key beneficiaries of the Pengerang Deepwater Terminal’s development due to its exposure in tank terminals, engineering, procurement, construction and commissioning and maintenance services.

“Dialog’s 25%-owned industrial terminals (Pengerang Terminals (Two) Sdn Bhd, PT2SB) has started to contribute upon the commissioning in November 2018, and is expected to complete [it] by June this year,” he said.

A fund manager who declined to be named said e-government services providers like MyEG would benefit from the implementation of government policies such as targeted petrol subsidies for the Bottom 40 section of society, as these policies would require e-government systems to support them.

MyEG shares closed four sen higher at RM1.53 last Friday, while eight out of nine analysts covering the stock have kept “buy” calls on it, with a median TP of RM1.68, indicating a potential 9.8% upside.

In a note dated May 31, BIMB Securities Research noted that the group’s 1HFY19 core earnings were flat despite an 8% rise in revenue, no thanks to higher net operating expenses and taxation in 2QFY19.

That said, the research house decided to keep its “buy” on the stock with a TP of RM1.70, which implies a FY19/20F PE of 25 times and 22 times, respectively. “We remain positive on MyEG given its strong business prospects and established branding, which could provide structural earnings growth to the company,” it added.

According to Bloomberg, all three analysts covering the stock have it on “buy”, with a consensus TP of RM3.56, which represents a potential gain of 8.54% from the stock’s closing price of RM3.28 last Friday.

A fund manager, who declined to be named, said technology counters such as Pentamaster might see more business as a result of the US-China trade war.

“I still like technology stocks, even though they are still subject to the US-China trade war. The potential trade diversion may give us some upside for some [technology] stocks,” he said.

Two months ago, when the US first blacklisted Huawei, Pentamaster’s co-founder and chairman Chuah Choon Bin told The Edge Financial Daily that the group’s telecommunications segment could see a 20% to 30% decline in sales as a result of the ban. The contraction might take away 18% in total sales it anticipates for the year, he said.

Although Kenanga Research analyst Raymond Choo Ping Khoon, in his note dated July 5, told investors that the healthcare sector is expected to be dull in terms of earnings growth, he likes KPJ due to its future earnings growth and the fact that it is trading at a discount to its regional peers.

“Earnings growth is expected to come from narrower losses and profitability for hospitals built two to three years ago, including KPJ Rawang, Maharani, Pasir Gudang and Pahang,” he said.

CIMB, which has the stock on “add”, also wrote in a note on the same day that KPJ is expected to benefit from expanding its hospital network in the long run despite having to absorb start-up losses in the near term.

Of the 20 analysts who cover Maybank, nine have placed “buy” calls with a median TP of RM9.50, representing a potential upside of 6.50%.

The counter closed 0.34% or three sen lower at RM8.92 last Friday — with 10.9 million shares traded — giving it a market capitalisation of RM100.27 billion. Year-to-date, the stock has retreated a little over 6% from when it was trading at RM9.50 a share.

In a noted dated July 5, MIDF Reseach highlighted that Maybank is using new technology and data analytics to transform the way it manages risks, which it believes will be a positive contributor to the sustainability of the group’s earnings, going forward.

“We were surprised at how extensive [the use has been] and the pace [at which] the group has embraced data analytics, artificial intelligence and machine learning ... Furthermore, more improvements are being made. In our opinion, this will ensure the group’s resiliency to face economic shocks. This is evident by the group’s ability to post decent operational result despite a challenging environment in 1QFY19. Meanwhile, in the short term, we expect the weakness in income seen in [the] last quarter [to] likely moderate,” the resesarch house said.

It maintains a “buy” call on the stock, with an unchanged TP of RM11. “Also, we should note that its dividend yield of over 6% should provide a buffer for investors from any downside risk,” it added.