REGIONAL stocks mostly ended in positive territory on Monday, following Wall Street’s all-time closing highs on Friday. The Dow and the S&P 500 had closed up 0.13% and 0.33% respectively on Friday.

In China, the Shanghai Composite Index rose 0.33% to a five-year high as new banking regulations in China are expected to spur lending and boost the country’s economic growth.

Brent crude and WTI crude closed slightly higher, but still hovered around $60 and $55 per barrel respectively. Crude palm oil prices continued to rise, gaining as much as 3% yesterday, amidst concerns Malaysia’s floods will affect production and harvesting of the commodity.

On the home front, the local bourse rebounded from earlier losses to close higher despite negative sentiment due to the air crash involving AirAsia on Sunday. The FBM KLCI index increased by 0.23% to close at 1,768.41.

However, market breadth was slightly negative with losers outweighing gainers by a ratio of 1.1 to one.

The ringgit weakened marginally against the greenback, trading at 3.50 per US dollar at the time of writing.

I kept the portfolio unchanged. 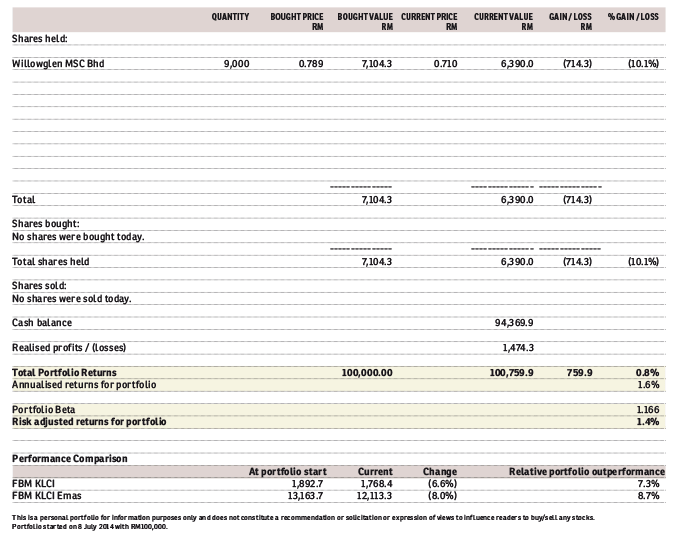