REGIONAL markets extended gains on Friday after US stocks jumped the most since 2011, led by technology stocks. At the closing bell Thursday, the Dow and S&P 500 both soared by 2.4%.

In contrast, WTI crude and Brent crude continued to languish. Both are now trading near five-year lows — the former just above US$50 per barrel and the latter around $60 per barrel (at the time of writing). Given current supply glut and weak global economic growth outlook, crude prices are likely to remain low for a considerable time.

European stocks ended sharply higher Thursday — up between 2.0% and 3.4% — mirroring US stock gains and recouping more than half of their losses over the last six days. Markets also opened higher Friday.

The euro, however, traded near a two-year low against the greenback on speculation that the European Central Bank (ECB) will increase stimulus measures while the Fed is expected to raise rates by mid-2015.

On the home front, the benchmark index closed 0.94% higher at 1,715.99. Market breadth was positive with gainers outweighing losers 2.4 to one.

Willowglen, the only stock in the portfolio, increased by 0.7% to 68.5 sen yesterday.

I kept the portfolio unchanged. 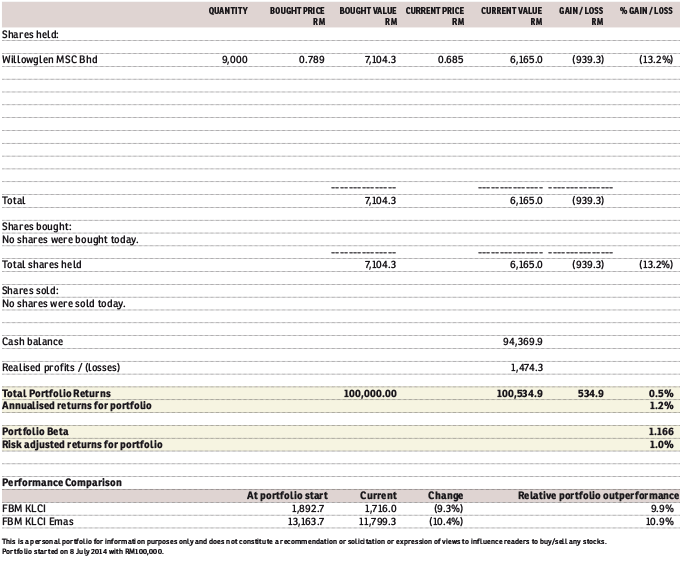