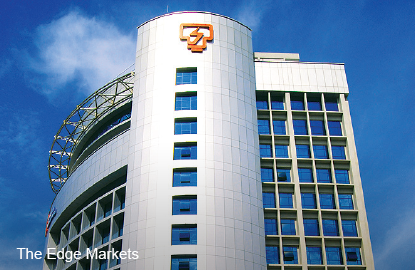 Tenaga Nasional Bhd
(July 6, RM12.62)
Maintain market perform with a target price (TP) of RM12.78: Last Friday, Tenaga Nasional Bhd (TNB) announced that it had already submitted a letter of acceptance to the Energy Commission for Track 3B project.

At the same time, it also entered into an agreement with 1Malaysia Development Bhd (1MDB) for the acquisition of a 70% stake in Jimah East Power Sdn Bhd (JEP) or Track 3B project, for RM46.98 million.

Under the agreement, TNB does not assume any guarantee of 1MDB. TNB’s financial obligations will only be in respect of the equity funding of JEP.

Given that the actual project development cost incurred by 1MDB was about RM83.68million as at April 17, 2015, the acquisition cost of RM46.98 million seems fairly reasonable.

With the RM9 billion debt financing, TNB’s net gearing could rise to 0.66 times from 0.46 times, based on the second quarter of financial year 2015 (2QFY15) quarterly results.

This does not appear overly stretched given its strong cash flow generating ability.

In all, we are positive on the acquisition given the reasonable purchase cost. However, we maintain our opinion that so long as 1MDB’s asset sales of the remaining brownfield power plants (under Edra Global) are not settled, TNB’s share price will continue to come under pressure on fears of overpaying.

As mentioned above, TNB will continue to face selling pressure as long as the 1MDB saga is unsettled.

Operationally, after a strong first half (1HFY15), TNB is likely to face a weaker 2HFY15 as the 2.25 sen/kWh rebate for March to June 2015 is now extended till December 2015, will be reflected then.

The rebate would increase operating cost by RM545 million in 3QFY15 alone. As such, the strong earnings shown in 1HFY15 will be a one-off event as future earnings will depend mainly on TNB’s operational efficiency as fuel cost will be passed through on a six-month laggard basis.

In the near term, we believe TNB’s share price is not likely to be fundamentally driven given the ongoing 1MDB issue. 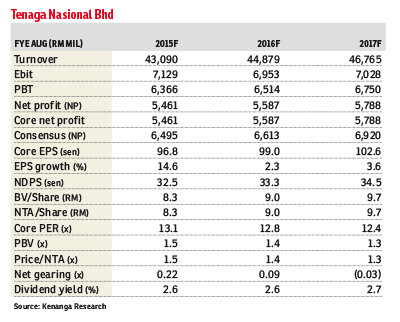