Tian Chua now eligible to contest in elections, be appointed a senator 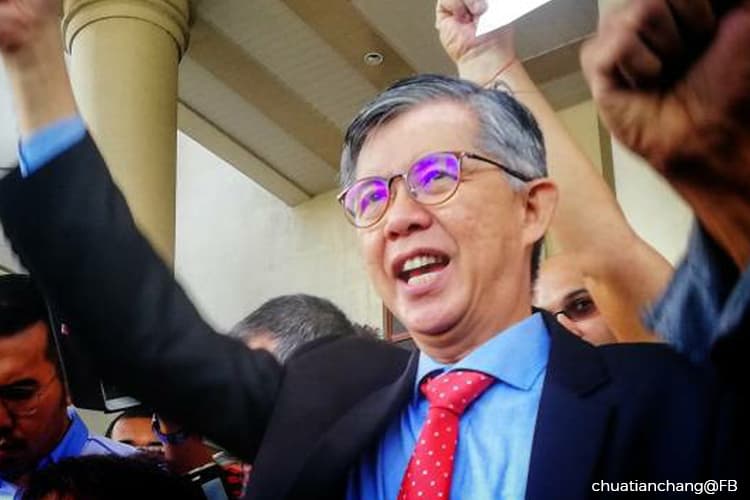 KUALA LUMPUR (Nov 6): PKR vice-president Chua Tian Chang can now contest in any election or be appointed as a senator in Malaysia after the High Court here today declared that the Election Commission's (EC) move to bar him from contesting in the 14th general election (GE14) last year was unjust and not equitable.

"This [the EC's decision] was based on his two convictions, (which) had not resulted in his disqualification to contest in any election. This (non-disqualification) was not only verified by the court but also the then Speaker (Tan Sri Pandikar Amin Mulia).

"[So] it was unfair for the EC to reject his nomination. As a result of the EC's decision last year, he had lost his pension [as a former MP], but this is now being restored," Gurdial said. If an elected representative retires after serving one term, the individual is entitled to a pension.

As such, Justice Mariana declared that Chua, who is better known as Tian Chua, is now able to contest in any election, according to Gurdial. The High Court's decision today also means that Chua can be appointed as a senator, Gurdial said.

Justice Mariana delivered the decision in chambers, while Chua's supporters were ushered out while awaiting her decision. She did not make any order as to costs.

It was previously reported that Chua's candidacy to defend his Batu parliamentary seat was rejected by the EC returning officer, a decision made based on him having been fined RM2,000 by the Shah Alam High Court in March last year for insulting the modesty of a police officer.

Based on Article 48(1)(e) of the Federal Constitution, an elected person would be disqualified if he had been convicted of an offence in the Federation or in Sabah and Sarawak, and sentenced to an imprisonment of not less than one year or a fine of not less than RM2,000, and has not received a pardon.

In the 13th general election, Chua was allowed to contest despite having also been convicted and fined RM2,000 for hurting a police officer in a scuffle.

The apex court ruled then that an elected representative would lose his or her seat if the individual was fined more than RM2,000.

Following the EC's rejection of his candidacy, Chua ended up endorsing independent candidate P Prabakaran, who later won the seat and joined PKR.

Chua subsequently filed an originating summons over his candidacy rejection, and his case went up to the Court of Appeal and Federal Court before being remitted back to the High Court for trial.

The PKR vice-president said his status as an MP should not be denied as the EC had previously disallowed him to contest.

Commenting further on the decision today, Chua said he is merely seeking justice for his plight.

"I do not want to see a government agency like the EC being abused by the powers that be and be used as a political ploy to deny anyone of its candidacy," he said.

"I have a constitutional right to contest and should not be denied (to contest) in future elections and to serve as a legislator. In future, any public institutions like the EC should abide by the Federal Constitution and not follow the political power of the powers that be," he added.

Senior federal counsel Azizan Md Arshad, who appeared for the EC, confirmed the decision when contacted.