THHE caught between a rock and a hard place

THE mood at TH Heavy Engineering Bhd (THHE) is sombre. The group’s main asset — a fabrication yard — is almost idle, and its other sizeable asset, a floating production, storage and offloading (FPSO) vessel that is being refurbished, is only likely to generate earnings in the latter half of 2016.

In a nutshell, if THHE does not bag a reasonably large fabrication job by the first quarter of next year, the group could be in some serious trouble as it only has some RM300 million worth of work left at the 60-acre fabrication yard in Pulau Indah.

Against this backdrop, much of THHE’s fortunes hinges on the US$1 billion Central Processing Platform (CPP) job for the Baronia oil field off the coast of Sarawak by state-controlled Petroliam Nasional Bhd (Petronas).

However, judging by reports in international oil and gas publications, South Korea’s Hyundai Heavy Industries (HHI) seems to be the front runner for the CPP project, edging out THHE and its partner McDermott International Inc.

In an exclusive interview with The Edge (see below), THHE’s managing director and CEO Nor Badli Munawir Mohamad Alias Lafti did not mince his words when explaining how important the Baronia CPP is to THHE. “It’s critical in the sense that by June next year, our fabrication yard will be completely zero … our yard will be zero. If you were to walk into our yard now, it’s [nearly] empty.”

At present, THHE’s main fabrication contract is the RM250 million Kinabalu Non-Associated Gas (NAG) Topside project, which is due for completion in the third quarter of next year.

Thus, THHE has to bag the Baronia CPP job or risk going through a quiet patch, as the next large-scale job from Petronas is the Sepat CPP, which is likely to be awarded only in the third quarter of next year.

Of Petronas’ five CPP jobs that are up for grabs under its last capital expenditure plan, two — SK-316 and Bergading — have been awarded. SK-316 went to a joint venture between Malaysia Marine and Heavy Engineering Holdings Bhd (MMHE) with Technip and Bergading went to HHI.

As for the third CPP job, Baronia, which is likely to be awarded soon, HHI is said to be the favourite to get it. It is only after Baronia has been awarded that Petronas will look at the CPPs for Sepat and Kasawari.

For THHE, its partnership with US-based McDermott has not been fruitful, as possibly three out of five Petronas jobs have slipped their fingers.

To recap, in late 2012, THHE inked an agreement with McDermott under which THHE acquired a 30% stake in Berlian McDermott Sdn Bhd while McDermott took up a 30% stake in TH Heavy Engineering Fabricators Sdn Bhd. Both deals were valued at an identical US$24.5 million each.

Berlian McDermott is a company licensed to provide transportation and carry out installation for the oil and gas sector. It also owns a pipe-laying barge known as the DB30. TH Heavy Engineering Fabricators is a licensed Petronas fabricator.

However, the main thrust of the partnership with McDermott was to bag CPP and related jobs.

THHE’s other asset, the FPSO dubbed the Deep Producer 1 (formerly the 68,000 deadweight tonnage tanker MV Laurita), was acquired in July 2011 as a distressed asset at a cost of US$82.5 million — about 40% of the US$200 million the previous owners spent building the vessel.

However, the FPSO was not bought with a locked-in charter contract and only secured a RM1.2 billion job in May this year from JX Nippon Oil & Gas Exploration (M) Ltd for works in the Layang Development Project located in Block SK10, off the coast of Sarawak.

The FPSO cost THHE about RM2 million a month to sustain when it was unchartered. However, now that it has secured a contract, the Deep Producer 1 is set to undergo a US$150 million to US$180 million conversion exercise so that it can be used in a gas field. Therefore, the FPSO will only start generating revenue in the latter half of 2016.

For instance, Alliance DBS Research says, “THHE’s earnings outlook for FY2015 is becoming increasingly challenging as order flow has been slow … As such, we lower our new order win assumptions for FY2015 by RM200 million to RM500 million with the increasingly competitive landscape. This leads us to cut FY2015-16 forecast earnings by 18% to 26%.”

With the cut in earnings estimates, Alliance DBS lowered its sum-of-parts-based target price to 65 sen from 95 sen previously. TH Heavy closed last Thursday at 59 sen, with a market capitalisation of RM677.6 million.

Alliance DBS forecasts THHE raking in RM21 million in net profit from RM385 million in revenue for FY2014. For the six months to June this year, THHE suffered a net loss of RM4.5 million from revenue of RM206.8 million.

Nor Badli explains that the operating environment has become increasingly challenging, with the number of licensed fabricators increasing from six to eight after Petronas awarded licences  to Sarawak-based KKB Engineering Bhd and Muhibbah Engineering (M) Bhd in 2013.

Despite the large number of GLCs, Petronas has been standing firm, awarding jobs hinged on nothing but price, which has not gone down well with many.

“Petronas is the hand that feeds us, so we will just have to take it one step at a time. It’s like being punched but you still [have to] keep your chin up. There’s nothing much we can do.

“(But) I wish Petronas had a different kind of policy, in which they allow foreign bidders to come, but gives priority to locals. So, if price is the criteria, perhaps get the locals to match it. Give us first right of refusal,” Nor Badli says.

Since Tan Sri Shamsul Azhar Abbas took over the helm of Petronas as president and CEO in February 2010, the national oil firm has changed its approach. It stopped allocating fabrication jobs only to local players after it found that they had been overcharging the company by as much as 30%.

“Because of this overcharging, Petronas changed the mode. Now we don’t overcharge and we don’t get the jobs [either],” Nor Badli says.

THHE, like many other disgruntled industry players, blames Petronas for its ailing financials — but the oil major is unlikely to change its emphasis on costs any time soon. 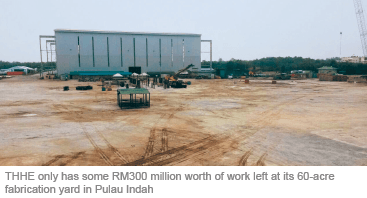