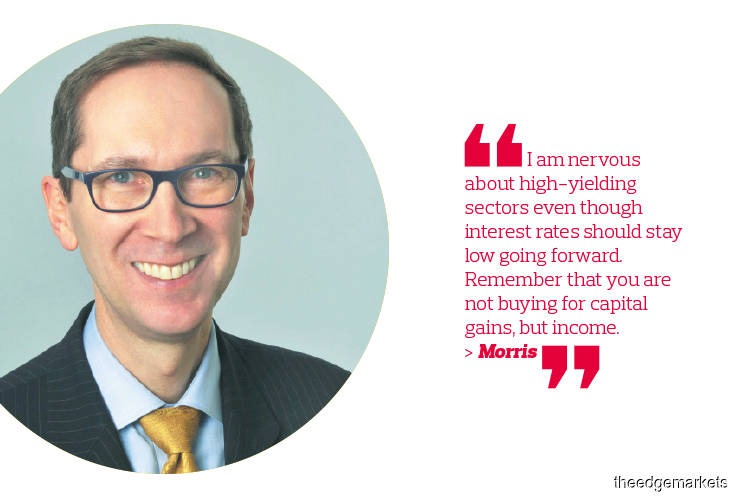 Stock investors should keep an eye on corporate earnings around the world this year as it is a key determiner of stock market performance going forward, says Daniel Morris, senior investment strategist at BNP Paribas Asset Management in Malaysia.

He points out that global stock markets — led by those in the US — did well last year. Their performances were driven by an increase in valuations and falling interest rates as central banks eased their monetary policies. Corporate earnings growth, however, was almost flat in many countries.

“If you look at the factors that contributed to last year’s rally, they were everything but earnings. Earnings [growth] has been more or less zero [per cent],” says Morris.

He adds that such a trend is not sustainable and corporate earnings will have to improve for stock markets to continue their positive performance in 2020.

According to Morris, market analysts are expecting earnings growth of about 10% and 8% for the US and EU markets respectively this year. However, he believes these targets may not be achievable.

Morris says corporate earnings in these markets should be positive on the back of stabilised global growth, partly reflected through steadier Purchasing Managers’ Indexes and other soft and hard data published recently. Nevertheless, earnings growth in the US and the EU could miss those targets.

“Analyst expectations tend to be more optimistic at the beginning of the year. I do not think global growth will be that strong to support these figures,” he says.

Morris says the US is expected to maintain its economic growth numbers while China’s will continue to stabilise. The EU’s economy, while not doing great, is expected to remain suppressed due to the ongoing Brexit issues.

Brexit is still a risk to the EU’s economic growth even though uncertainties surrounding the event have reduced. The UK needs to finalise its agreement and future relationship with the EU by the end of the year, which could be a challenging task, says Morris.

“This will have a knock-on effect on Germany [and the rest of the EU] if the UK fails to negotiate a deal with the EU. The weakness in Germany’s economic growth is its [reliance on] exports to the UK, which is very clear. The challenges posed by Brexit are still there,” he adds.

Investors need to be more selective to achieve higher-than-average returns, he says. For instance, the average earnings per share (EPS) of the Nasdaq, on which many younger and innovative companies are listed, outperformed those of the overall US, EU, Japan and emerging markets last year. Investors who were able to identify those Nasdaq-listed companies would have enjoyed good returns.

The EPS in each sector under the MSCI USA Index also varies. Last year, the average EPS of the index was dragged down significantly by the energy and internet retailing (mainly Amazon) sectors while the construction materials, automotive and components as well as transport sectors outperformed the others, says Morris. “Investors should be a lot more selective around sectors, instead of countries and regions,” he adds.

The technology sector, favoured by many investors, is expected to do well and its valuations are not expensive on a historical basis, says Morris. However, he cautions investors to be more selective in picking tech stocks as the US-China trade war could produce winners and losers over the long run.

On the flip side, the utility and real estate sectors in developed markets ex-Japan look expensive. Stock prices in these sectors have been driven by the hunt for yields amid a low interest rate environment, says Morris.

“I am nervous about high-yielding sectors even though interest rates should stay low going forward. Remember that you are not buying for capital gains, but income. If you are buying a 3% yield at such a high price, it will be challenging when the price of these stocks start to normalise,” he adds.

In addition to the ongoing US-China trade war, a critical risk that investors should keep an eye on is an increase in the US inflation rate, which could alter the Federal Reserve’s monetary policy decision. “Given that the unemployment rate in the US is at a historical low, it is not crazy to think that inflation could return. Given how unprepared the markets are, it will have a huge impact on them,” says Morris.

Investors should also pay attention to the US presidential election in November. While the president will have an impact on markets, it is more critical to see if the Republican or Democratic Party will control the House of Representatives and the Senate.

“Congress is part of the US government that controls its budget. There may not be a whole lot happening [in terms of policy changes] if, say, the Republicans retain control of the Senate and the Democrats control the House,” says Morris.

“There is this term called the reversal rate, which is widely discussed today in the EU. The idea is that central banks can boost growth by cutting rates. But if you go down to zero and beyond, it will start to hurt growth at some point. Then, you will have to find out what the reversal rate is or whether we are already below that rate,” says Morris.