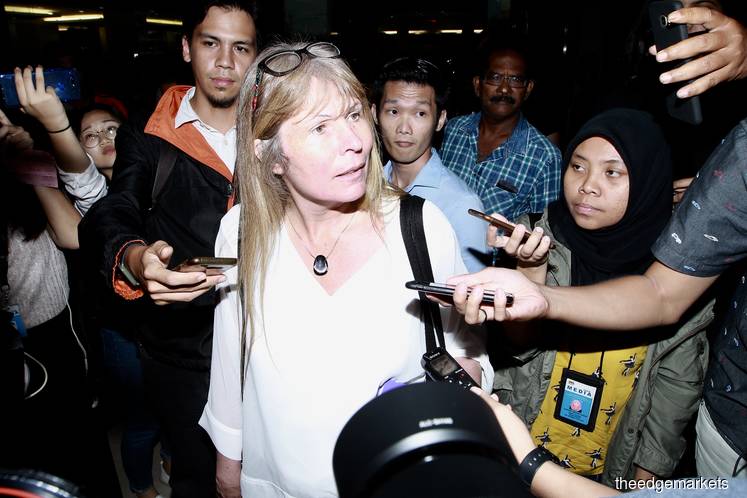 KUALA LUMPUR (May 27): Sultanah of Terengganu, Sultanah Nur Zahirah, has filed an application at the High Court here for her defamation suit against the founder and editor of Sarawak Report, Clare Rewcastle-Brown (pictured), and two others to be decided purely on points of law and without going for a full trial.

Counsel Datuk Mohd Haaziq Pillay, who appeared on behalf of Sultanah Nur Zahirah, told reporters today that they had filed the application on May 13 for the suit to be summarily disposed of according to Order 14A of the Rules of Court 2012, without going for a full trial.

"The matter will summarily be disposed of in so far as the judge will make a ruling as to whether the statement made by the defendant is defamatory," Mohd Haaziq said.

He stressed that the judge has the discretion under the law of defamation, to decide whether Rewcastle-Brown's statement, which was published by Gerakbudaya Enterprise Sdn Bhd and printing company Vinlin Press Sdn Bhd in the book "The Sarawak Report — The Inside Story of the 1MDB Exposé" was indeed defamatory.

"If that happens, what this would mean is that Her Royal Highness would not be required to give evidence, and therefore the onus now falls on the defendants as to whether they can come out with their own defences, and whether the defences allowed under the Defamation Act would be admissible or not," Mohd Haaziq explained.

He said the defendants had filed their reply to the application on Friday (May 24), and he and his team will now have to file the affidavit in reply by June 12.

Mohd Haaziq also told reporters that the case is now fixed for further case management on June 17, during which the judge is expected to give further direction regarding the submission that is to be made.

In her statement of claim, Sultanah Nur Zahirah alleged that Rewcastle-Brown had used defamatory statements in the book "The Sarawak Report — The Inside Story of the 1MDB Exposé", which was published around August last year and printed by Vinlin Press.

Sultanah Nur Zahirah alleged that the defamatory statements implied that she, the plaintiff, was involved in corrupt practices and interfered in the administration of Terengganu as well as used her role to influence the setting up of Terengganu Investment Authority (TIA) and assisted Low Taek Jho, also known as Jho Low, to be the adviser of TIA.

She said it was common knowledge that 1Malaysia Development Bhd (1MDB) was earlier known as TIA.

Sultanah Nur Zahirah is claiming RM100 million in damages from each of the defendants and wanted the second defendant to withdraw the books containing the defamatory statements as well as stop the third defendant from printing more copies of the book.

In their statement of defence, the three defendants denied that they had accused Sultanah Nur Zahirah of having been involved in corrupt practices.

Rewcastle-Brown claimed that Sarawak Report did not suggest that Sultanah Nur Zahirah was involved in a conspiracy that involved Low or that she was involved in the government administration associated with 1MDB matters.